A post as an administrator at the SLGA offices in Perth is being advertised. To view the advert please click on the link below.
CLICK HERE TO READ MORE
Posted by Carol

Marion Mitchell is organising the Lanark Golf Club Open day on Sunday 14th July 2013.
Her chosen charity this year is The Multiple Sclerosis Society
CLICK HERE to get your entry form
Posted by Carol

PAT HUTTON HAS A HOLE IN ONE OVER ROYAL TROON 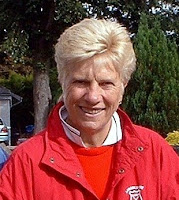 Congratulations go to Lanark's Pat Hutton who had a Hole in One at the 5th Hole over Royal Troon.

She was playing in Troon Ladies -- McInnes Shaw Trophy today.

The County Jamboree was held at Bothwell Castle GC this week and one of the highlights of the week was the standing ovation that Donna Jackson was given at the dinner on Monday evening. Below is the video of Donna's presentation award given by RLCGA Captain Maureen Woodhead. To read more --- RLCGA WEBSITE

Although these were the main match days there are other photos of the different Counties on each day.
For all the reports go to the Renfrewshire Website

Cheers - from your Webmaster Carol
Posted by Carol

Renfrewshire joined Aberdeenshire in the Scottish women's county golf championship finals at Stirling Golf Club from September 20-22 by beating Lanarkshire 6 1/2-2 1/2 in the West Division title decider at Bothwell Castle GC today
Both teams went into the last day with 100 per cent records and the decisive contest was closer than the overall scoreline would suggest.
Renfrewshire, the defending champions, edged ahead 2-1 from the morning foursomes and took the singles 4 1/2 -- 1 1/2, three of the games going to the 18th green.
Renfrewshire's Alyson McKechin (Elderslie), the Scottish champion, was four down after 13 holes to Emma Caldow but won the last five holes for a one-hole victory.
The Briggs sisters, Megan and Eilidh, again provided the backbone of the Renfrewshire
campaign, winning all their matches, foursomes and singles
Carol Whyte was 3 down with 4 to play and played well over the last few holes to get a halved match. Iona Stephen a newcomer to the team was also 3 down at one stage and rallied towards the end to win on the 18th green.
Last-day results:

The stage is set for a last-day title decider between defending champions Renfrewshire and Lanarkshire in the West Division women's inter-county team golf championship at Bothwell Castle tomorrow.
Both teams have played twice and won twice. Lanarkshire followed up their 6-3 win over Ayrshire by beating Dunbartonshire and Argyll 5 1/2-3 1/2
The foursomes were shared 1 1/2-1 1/2. The decisive singles victory for Lanarkshire came from Susan McGrenaghan who drove the 17th and holed her 3ft putt to beat Aileen Baker 2 and 1.
McGrenaghan had been four up after 13 but Baker won three holes in a row to slash her deficit to only one hole. Renfrewshire, big-margin wins over Dunbartonshire and Argyll in their first match, had a tougher time of it against Ayrshire before winning 6-3.
Former Scottish champion Megan Briggs was four down after 10 to Ayrshire's Roz Purdom but rallied so well that she won on the 18th green to give Renfrewshire a 4-2 lead in the singles after taking the morning fursomes 2-1.
DAY 2 RESULTS
LANARKSHIRE 5 1/2, DUNBARTONSHIRE and ARGYLL 3 1/2
Foursomes: Rachel Cassidy and Lesley Lloyd halved with Laura McGeachy and Jill Meldrum; Fiona Norris and Jenny Potter bt Anne Laing and Nichola Ferguson 2 and 1; Susan McGrenaghan and Susan Wood lost to Lorraine Campbell and Aileen Baker 2 holes (1 1/2-1 1/2)
Singles: Norris bt Laing 2 holes, Emma Caddow lost to Ferguson 6 and 5, Cassidy lost to Meldrum 6 and 5, Ruth Rankin bt McGeachy 3 and 2, McGrenaghan bt Baker 2 and 1, Lloyd bt Campbell 7 and 6 (4-2).
RENFREWSHIRE 6, AYRSHIRE 3
Foursomes: Alyson McKechin and Eilidh Briggs bt Connie Jaffrey and Audrey Thompson 4 and 3; Donna Jackson and Gillian Kyle lost to Emma Hale and Alex Glennie 4 and 3; Megan Briggs and Carol Whyte bt Jenny Linklater and Mhairi McKay 3 and 1 (2-1)
Singles: McKechin bt Jaffrey 3 and 2, Eilidh Briggs bt Katie McGarva 7 and 6, Megan Briggs bt Roz Purdom 1 hole, Iona Stephen lost to Thompson 6 and 5, Gillian McGinlay lost to Glennie 4 and 3; Whyte bt Hale 6 and 4 (4-2)
HOW THEY STAND Lanarkshire 2pt, Renfrewshire 2pt, Ayrshire 0pt, Dunbartonshire and Argyll 0pt.
Posted by Carol

RENFREWSHIRE AND LANARKSHIRE WIN ON DAY 1 OF THE COUNTY JAMBOREE

HELEN FAULDS IS CHAMPION FOR THE 13TH TIME AT DOUGLAS PARK

Helen Faulds won the Douglas Park Ladies Championship for the 13th time today when she beat up and coming Junior Fiona Raffarty.
Beverly Mitchell beat Aileen MacIntyre in the Ladies Senior Championship.
To see some photographs from the day --- CLICK HERE
Posted by Carol

Connie Jaffrey (Troon ladies) continued her good form of 2013 when she won the girls individual title at the Scottish Schools Golf Championship, held at Murrashall GC on Monday 10th June.

Having already won the Ayrshire Ladies County Championship title for the first time earlier this year, Connie Jaffrey stormed to an eight shot victory in the girls

The leading scores were :-

The West Vets team beat the East Vets at Longniddry yesterday by 6.5 - 3.5
To read the full report go to the West Vets Website
Posted by Carol

FROM THE SCOTTISH LADIES GOLFING ASSOCIATION

Are you Under 18 @ 1st January 2013, with a handicap of 34.4 or below and of Scottish Nationality? If so then your National Championship needs you! The Scottish Girls' (Close) Amateur Championship entry closes at 12 noon Monday 17th June 2013. This year’s Championship is being played at Ranfurly Castle from 16-20 July and should be a great week, so what are you waiting for, to download your entry form click here. (Link to slga website) 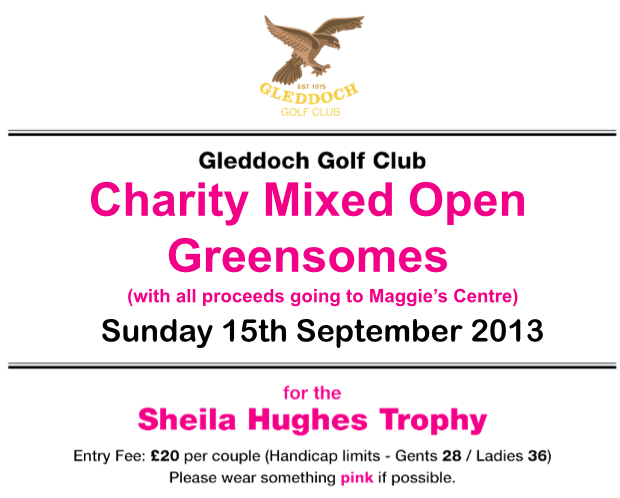 
Gleddoch Open Day Tri Am was held on Sunday 9th June in glorious conditions as can be seen by the photos above.

DANNY AND ALISON ARE WINNERS AT DOUGLAS PARK GOLF CLUB

In glorious weather conditions Danny and Alison Miller won the Sheila Connacher Memorial Trophy at Douglas Park Ladies Day yesterday. After playing in the event for over 30 years Danny and Alison were at last delighted to win the coveted trophy.
Posted by Carol

There are still some times available for Milngavie's Open Day on WEDNESDAY, JULY 1Oth from 8:00 am till 2:30pm.
This is a TRI AM so it is a fun day out.
There are prizes at most holes so it will suit all handicaps.

Please enter in teams of 3 at a cost of £30 per team (to include 2s and a sweep)
There are sponsored prizes at most holes so come and enjoy a day out at one of the prettiest courses in the West.
Enter directly online at www.milngaviegolfclub.co.uk
OR phone the Secretary on 0141 956 1619
OR contact Anna Telfer on 0141 339 1967  or email telferanna@hotmail.com
Posted by Carol

COUNTY TEAMS FOR THE WEST OF SCOTLAND JAMBOREE

Great chance for a practice for SLGA Counties Open Meeting to be held at Drumpellier in August.

The Amalgamation Group wants to receive constructive feedback from everyone with the SLGA and SGU, inlcuding Directors, County committees, golf clubs and golf club members.  --- Click on the following link ----- Minutes 12 March
Please send your feedback to secretary@slga.co.uk or by post to the SLGA Office in Perth.

By COLIN FARQUHARSON
Colin@scottishgolfview.com
St Rule Trophy winner Ailsa Summers, a student at St Andrews University, and Carnoustie Ladies clubmate Jessica Meek and Aberdeen-born Gemma Dryburgh are new full Scotland caps in the squad of six named by the Scottish Ladies Golfing Association to compete in the European women's team golf championship at Fulford Golf Club, Yorkshire from July 9 to 13.
Dryburgh, who plays on the US women's college circuit as a student at Tulane University, New Orleans and whose father is an Aberdeen-based oil executive, is the No2 Scot in the world amateur rankings next to Sally Watson who is turning professional later this month.
Meek leads the professionals on the Paul Lawrie Ladies Tour Order of Merit after four events during which she has not finished out of the top five. She was the leading qualifier for the match-play stages of the recent Scottish women's amateur championship at Longniddry.
The team is completed by Stirling physical education student Eilidh Briggs (Kilmacolm), new Scottish champion Alyson McKechin (Elderslie) and Rachel Watton (Mortonhall), a student at Denver University.

MEGAN BRIGGS IS THE TOP WEST OF SCOTLAND PLAYER

The new date for the postponed Hamilton Open Day is Tuesday 18th June. There are some times available. For more information click on the link below.
Hamilton Ladies Open Day

Mount Ellon Ladies Greensome takes place on Monday 24th June at a cost of £12 per couple.

There are still times available and great prizes to be won.

Contact  Susan McGrenaghan on 07731341516 or email megcladies@hotmail.com
Posted by Carol

The format is an individual Stableford competition. Cost: £10. Times are available from 8.00am to 5.30pm.
To download an entry form please click on the link below.

By COLIN FARQUHARSON
Colin@scottishgolfview.com
Ailsa Summers, 19-year-old student from Carnoustie, shaved a stroke off the women's record for the St Andrews' New Course today (Saturday) as she forged clear of the star-studded cosmopolitan field at the end of the first round of the 54-hole St Rule Trophy.


Ailsa Summers --- Angus girls and women's county champion and a Scotland girl international, shot an eight-under-par 67, one under the previous mark set in 2003.
Ailsa had two eagle 3s, seven birdies and, astonishing in a round this low - a double bogey 5 at her second last hole, a par-3.
She reached the turn in three-under 34 with birdies at the first, second, fifth and sixtth, dropping a short at the par-4 fourth.
Coming home, she birdied the 10th, got the first of her eagles at the 12th, birdied the 14th, got eagle No 2 at the 16th, then double bogeyed the short 17th but finished in champion style with a birdie 4 at par-5 18th.
The CSS for the day was 75 which underlines the merit of Summers' round.
She will start Sunday's second and third rounds - both to be played over the Old Course, St Andrews, with a useful lead of four shots from two other students, fellow Scot Eilidh Briggs (Kilmacolm) and Geordie Ami Storey (Close House), both on 71.
The French, who have sent over one of their strongest squads ever, are poised to make a charge on the second day, possibily spearheaded by the the World No 22 female amateur, Celine Boutier.
But, after an opening 73, she has six shots to make up on Ailsa.
Scottish champion Alyson McKechin (Elderslie), bidding to join the handful of players who have won the "Scottish" and the St Rule in the same year, has a mountain to climb after a first-round 76.

Thanks go to Colin Farquharson for the report