Scottish Amateur Champion Jenna Wilson was presented with the SLGA’s Ladies Order of Merit award, in front of a sell out crowd at the Crowne Plaza Hotel in Glasgow on Friday 28 March.

The Scottish Golf Dinner, sponsored by Dunfermline Building Society for the first time and hosted by BBC Sports Presenter Dougie Donnelly, celebrated the many successes of Scottish leading amateurs during the 2007 season.

Jenna, from Strathaven, whose solid performances last year saw her earn her card for the European Tour, received her award from fellow Tour professional Lynn Kenny.

Thanks go to Gillian Kirkwood for the report
Posted by Carol

This is a message from D&A county, apologising to all handicap secretaries who may have received some results in the last week through Club Systems 2000. It was a test run that inadvertently got publushed to howdidido and you may have received some scores. PLEASE DO IGNORE THEM --- Just put them in the bin
Please note the 1st County Medal which is the Championship Qualifier at Douglas Park is on Monday 14th April.
These results will be the 1st D&A Away scores that will be returned after the completion of that qualifying round.
Posted by Carol

Old Ranfurly's Open Day is on Thursday 3rd July 2008. The event is following its traditional format of greensomes with the tombola stall and variety of sponsored holes.
To get your entry form through Golf Central Click Here

Alternatively you can use this Entry Form

Buchanan Castle Golf Club, which joined forces with the national junior golf programme, clubgolf, this year to encourage children and their families to play golf, is holding an Open Day for juniors this Sunday (30 March) between 11am and 4pm
To read all about it go to the Gillian Kirkwood Website
Posted by Carol

Calling all players that took part in the 2007 Tee’s Off in Scotland Initiative!!
The 2008 HSBC Wee Wonders Championships are here!!

Don’t forget to sign up for this year’s Competition!!

There are 16 Local Qualifiers across Scotland, split between the 2 regions – Scotland North and Scotland South.
A total of 40 new Local Qualifiers for 2008 making 119 venues across the UK and Ireland ----
West of Scotland Venues are North Gailes Country Club 26/05/2008 Irvine, and The Ladies Golf Club Troon 01/06/2008 Troon

Launch of MySport Junior Golf – a fun and interactive way to stay in touch with friends, post your scores, and pick up tips from the world’s top golfers

To register, go to www.hsbcweewonders.com and sign up today, or pick up an entry form from your local HSBC Branch.

With over 2,000 players already registered, Local Qualifiers are filling up fast so make sure you sign up for your Scottish Local Qualifier in the UK’s largest open golf competition for 5-12 year olds.

Happy Easter to all our Readers

At a meeting of the West of Scotland Captains yesterday it was agreed that the The West of Scotland Ladies' Close Championship to be held on Sunday, 18th May, 2008, at Haggs Castle Golf Club be postponed due to the Womens' 10K Run taking place on that date. It is hoped to reschedule the event in October - details to follow soon.
Posted by Carol

Email ThisBlogThis!Share to TwitterShare to FacebookShare to Pinterest
Labels: Haggs Castle, Others, SLGA 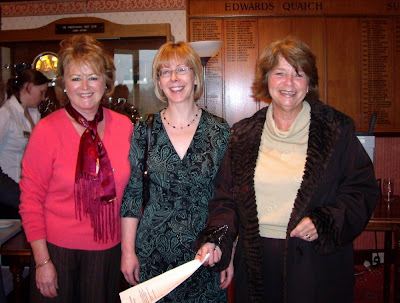 They had speakers and raised £328 for Chest, Heart and Stroke Scotland.

Thanks go to Alison Finlayson for the news
Posted by Carol

Happy St Patrick's Day to all our Irish Readers 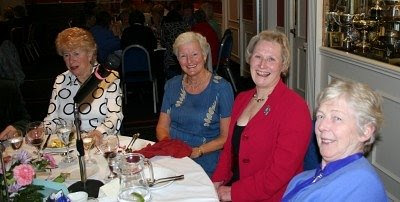 D&A Captain Kay McColl welcomed the ladies to what proved to be a most enjoyable evening. Thanks must go to the catering and bar staff at Douglas Park Golf Club for the excellent food and service (even though our table did not get any rolls and we tried to get a double brandy instead!!!) £400 was raised by the raffle and this money goes to our Juniors - many thanks to those who donated prizes.
The floral decorations on the tables is well worth mentioning and thanks go to the lady who did all this hard work.
The Guest Speaker was the very well known Jenny McGahan and she proved to be informative and entertaining, telling us of various things that she has experienced while on duty and how at a very young age she was brought up talking about golf and golf rules.

I did like her story about the two Irish men playing a match - they got round to the 12th hole and discovered that their drives had landed side by side and they were not sure which ball was which - they had NOT marked the ball). After much discussion Mick told Paddy that he would just play the yellow ball and he could play the white one!!!

Jenny also told us of playing in a mixed foursomes at Douglas Park, she was not happy with how she had played and apologised to her partner and told him that she had never played quite so badly. He told her that he did not realise that she had played before!!!!! Obviously a very good sense of humour since he is now her husband!!

Another good story about Belle Robertson playing with Anne Laing at Douglas Park - when Anne was just coming through as a top player - Belle drives off at the 4th tee (dog-leg) she has used her three wood and is in perfect position - she then tells Anne that when she was her age, she would have used her driver and cut out the dog-leg. Anne duly takes out her driver and plays a great drive which ends up in the trees - she looks at Belle and Belle then tells her that when she was her age there were NO trees!!

Lots of interesting things to do with being a referee - hours of boredom interspersed with moments of Sheer Panic - she also told us about attending the Rule School at St. Andrews and of all the interesting people she has met - one American invited Jenny and her husband to Augusta - so this Rule School at St. Andrews sounds like a very good place to be.

Well done Jenny, I can assure you that listening to you was a lot better than watching paint dry!!!
The evening finished with Vice Captain Jennifer Kinloch giving a most amusing vote of thanks.

108 ladies attended the Whitecraigs Golf Club annual dinner on Tuesday 11th March 2008. Alison Finlay who is this years Lady Captain invited Grainne Crawford to be her guest speaker
Grainne is a kind of motivational speaker and she really entertained us well, Alison said.
She talked a lot about visualising how we wanted to play the game so we played better golf. She was very funny and everybody really enjoyed the night.

She is co-director of a company called Well Connected Life Ltd. Her role involves working within organisations to create a well business ethos. Her business helps people to achieve balance in both their business and private lives using fun, knowledge, tools and techniques that really ROCK
A good evening was had by all ---- Click on the slideshow with your mouse to get the ladies names in the photos

The Fells and Faulds win the Texas Scramble at Vilamoura 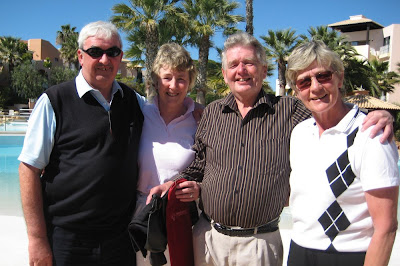 Just to let you all know we are having a great time in Portugal. Played Millenium on Tuesday and the Old Course on Wednesday. Today (Friday) the Fells and the Faulds won the Texas Scramble at Pinhal with a gross 66 net 62.7. It was the best they have ever done and were delighted with their success. The runners up from the South of England had a net 63.3. Tomorrow its off to the Victoria Course.
Weather has been fantastic
Posted by Carol

It's Mothers Day and your webmaster is off to Portugal for a week's holiday with husband Gordon and Bobby and Helen Faulds. There could be some serious golf competition over the week and with all the bad weather we have been having and lack of practice, it could be a little tricky. --- However with Helen as my partner I'm sure I should not get too worried about our opposition !!!

I WILL TRY TO CHECK UP ON ANY NEWS WHILE I AM AWAY AND REPORT IF I CAN --- HOWEVER, I APOLOGISE NOW IF THERE IS A GAP FOR A WEEK ---- I NEED A FEW MORE BLOGGERS TO KEEP THE WEBSITE GOING !!

In the meantime "HAPPY MOTHERS DAY" to any of you Mums out there and from me to my Mum -- "The Best in The World !" Click on the link below 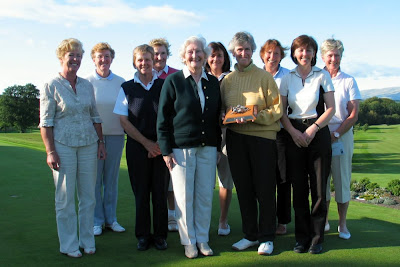 Sad news to report today with regard to Mrs J L (Tony) Moffat of Aberdeen Ladies. It is understood she was found dead at her home in Aberdeen on Thursday.
A vice-president of the Scottish Ladies Golfing Association, Tony was Aberdeenshire Ladies County Golf Association president from 1992-1993 and was one of the leading figures on the club and county golf scene for several decades.
She won the Aberdeenshire title in 1955 at Murcar and again in 1958 at Balgownie. She was beaten finalist five times - 1971 by Mrs Audrey Henderson at Hazlehead, 1974 by Mrs D Robertson at Cruden Bay, 1978 by Annette Laing at Peterhead, 1982 by Pamela Wright at Hazlehead and in 1983 by Elaine Farquharson at Aboyne. She was also a semi-finalist in 1973 and 1976.
Mrs Moffat was an Aberdeenshire county team player for many years. She was a member of the very strong Shire team that won the Scottish county championship for the first time at Elie in 1971 and also the following year when they made a successful defence of the title in the finals at Cruden Bay.
She was still holding down a place in the county line-up in the 1980s.
Tony was also a prominent figure in seniors and veterans' golf. Her name will be perpetuated in several championship trophies she presented. She was a past president of the Scottish Veteran Ladies Golf Association and the current president of the Northern Division of the SVLGA.
The picture above is of Toni with the winners at the 2007 Scottish Seniors Strokeplay Prizrgiving at Glenbervie --- click to enlarge
Thanks go to Gillian Kirkwood for the news
Posted by Carol 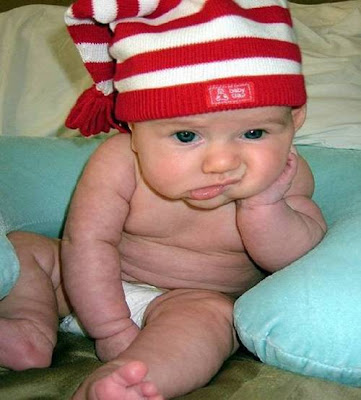 Is it SPRING yet?