NEWS RELEASE ISSUED BY THE R and A
The Women’s World Amateur Golf Ranking will be launched by The R and A following the success of the Men’s Ranking, now in its fifth year. The Women’s Ranking will be published for the first time in February when a new World Amateur Golf Ranking (WAGR) website for both the Men's and Women's rankings is unveiled.
The Men’s Ranking has grown in stature and today encompasses more than 1,800 counting events, ranking over 5,000 players representing 70 countries worldwide.
The launch of the Women’s Ranking follows an extensive period of testing by The R and A and will provide the women’s game with a way to compare amateur player performance in elite competition over a rolling 52-week period. The Women’s Ranking currently has a calendar of 1,350 counting events with over 3,100 ranked players.
“WAGR has been embraced by both amateur associations and Professional Tours alike in men’s golf, and we are delighted to be able to now offer this same service to the women’s game,” explained R and A Director, Mike Tate.

Gillian Kirkwood, Chairman of the Ladies Golf Union, said, “The LGU welcomes the Women’s Ranking as a very useful tool for the comparison of players, and believes it will become increasingly important around the world in informing decisions on team and field selection.”

Gonzaga Escauriaza, President of the European Golf Association, said, “The EGA welcomes the Women’s Ranking as a means for providing greater scope to our ladies’ European golf rankings as well as giving an incentive to our members who stage counting events and to the elite players who participate in them."

WAGR has become a weekly point of reference for players, championship organisers and golf fans alike and is supported by governing bodies and tournament administrators worldwide.
Posted by Carol

Clare Queen (The Carrick at Loch Lomond) survived a triple bogey today at her last hole to qualify for the Handa Australian Women's Open which tees off at the Commonwealth Golf Club in Melbourne's sand belt on Thursday.
She joins Kylie Walker (The Carrick at Loch Lomond) who was exempt from pre-qualifying but a third Scot, Lynn Kenny (Archerfield Links), failed to come through.
To read more go to the Gillian Kirkwood Website
Posted by Carol

Clare Queen and Kylie Walker are playing in Melbourne next week

Clare Queen, Kylie Walker and Lynn Kenny have all entered the Honda Australia Women's Open at the Commnwealth Golf Club on the Melbourne Sandbelt, starting next Thursday.
To read more go to the Gillian Kirkwood Website
Posted by Carol

Invitations and booking forms (to be returned to the SGU Office at The Dukes by 31 January) have been sent to clubs and counties for the second round of roadshows on the proposed amalgamation of the SLGA and SGU. These will take place at the following venues:

Places are limited to 4 per club (men and women) and 2 per county.
Posted by Carol

SLGA Chairman Shona Malcolm (pictured above with Nancy Chisholm) welcomed a full house to the Scottish Ladies' Golfing Association Limited AGM at the Dewars Centre in Perth this morning.
Before proceedings began, President, Emma Wilson, paid tribute to past Chairman, Anne Fraser, a member of Turnberry and Ayrshire, who died in 2010.
The Chairman's report had already been circulated and Shona picked out particular highlights, including the Scottish Ladies' team victory in the Home Internationals and third place in the European Team Championships, the Seniors' team fantastic victory in the European Senior Team Championships and our Junior team's runner-up spot in the Junior Home Internationals. On the individual front, Pamela Pretswell had won the British Stroke Play Championship and Kelsey Macdonald had been runner-up in the British Amateur and had won the Scottish Championship. Pamela and Sally Watson had represented GB&I in the Curtis Cup at Essex County Club, near Boston, Mass.
Shona also touched on the Performance and Development aspects of the SLGA remit, as well as giving thanks to those who had helped SLGA last year.
Finance Director, Lynne Terry, reported that SLGA Ltd had shown a healthy surplus of £61,000 last year, largely due to prudent cost control and some events costing less than expected. The fall in the number of lady golfers was once again evident at 4.1%, but an increase in subscriptions by £1 had absorbed that potential shortfall.
The report of the Scottish Representative on the Executive Council of the Ladies Golf Union, Janet Wake, had also been previously circulated, and Janet highlighted some of the coming events in the 2011 season, in partcular the Ricoh Womens British Open at Carnoustie, 28-31st July, the Astor Trophy (previously Commonwealth Trophy) at Fairhaven 15-19th June and the Vagliano Trophy Match against the Continent of Europe at Royal Porthcawl, 24-25 June.
Election of office-bearers went through smoothly with June McEwan (East) and Liz Scott (South) coming onto the Board. Lorna Bennett takes over from Janet Wake as Scottish Representative on the Executive Council of the Ladies Golf Union. Cara Gruber is the new North selector.
Amendments to Regulation 3.5 governing County Golf had already been disSL;GHAcussed by the County Captains and were approved at the meeting.
A "tidying up" exercise had been performed on Regulation 7 (National Championships and other Tournaments run by the SLGA) and amendments were approved at the meeting.
The proposal that annual subscriptions and fees for 2012 remain the same was also approved, with the caveat that if the amalgamation goes through then subscriptions would be different.

Amalgamation.
Chairman, Shona Malcolm and Chief Operating Officer, Sheila Hartley, presented a cut down version of the road-show that had already been shown to clubs and counties round the Country in the last few months. There were many questions from the floor. Anxiety that the proposals were proceeding at "breakneck speed" with little time to take it in, were voiced. These proposals are still at the consultation stage, and feedback from the roadshows and the two AGMS (The SGU AGM is next weekend) as well as individual feedback from clubs, counties and members will be examined at a meeting of the Amalgamation Committee at the end of January.
Sheila Hartley asked that any comments should be made to her before 25th January ----- secretary@slga.co.uk for consideration by this committee. Once the proposal has been refined in the light of feedback, a new round of roadshows will be presented to both men and women together in the spring, with a view to holding Special General Meetings of both organisations in the latter half of May, where 75% would have to vote in favour for the proposals for it to go through. If that happens the Board of the new Scottish Golf Limited would be recruited in the summer with a view to the Amalgamation happening on 1st October.
There were questions of costs, representation, who would pay etc. It was emphasised that the proposal was a "very broad brush" at present, the minutiae of how it will all happen has not yet be finalised. Yes, there would be costs, but they would be kept to a minimum, and absorbed by both organisations. Subscriptions, currently £9 for men and £14 for women would probably settle at £11 for both genders.
SLGA County and SGU Area boundaries would remain the same. There is no proposal for Counties and Areas to amalgamate. Clubs would be the stakeholders in the new organisation, with each club's liability limited to £1.
The move to bring the Scottish Golf Union (SGU) and Scottish Ladies' Golfing Association (SLGA) together as a single governing body has gathered momentum with a formal proposal being delivered to each organisation’s members.
The proposal with details of the roles of Board members and committees and a covering letter from the Amalgamation Group Chair, Donald Turner may be accessed by clicking on the links.

The SGU and SLGA have delivered a formal proposal to member clubs, Areas and Counties this week outlining plans for amalgamation as a single governing body from 1 October 2011. Click Here to read more
Posted by Carol

TO READ MARTIN DEMPSTER'S ARTICLE IN TODAY'S "THE SCOTSMAN" NEWSPAPER WITH REGARD TO THE
PROPOSED AMALGAMATION OF THE SLGA AND THE SGU, CLICK HERE
Posted by Carol

The fixture list for the 2011 season is almost complete and can be found at the following link:

Entry forms will be available to download from the SLGA web-site from early February.
Posted by Carol

First Tournament in Florida for West of Scotland's Alyson McKechin

A women’s golf squad, headed by Scottish champion Kelsey MacDonald (Nairn Dunbar),are currently taking part in three events on the women's amateur Orange Blossom Tour in Florida. Stirling University students who are on this trip along with Kelsey are: Rebecca Wilson, Jordana Graham, Eilidh Mackay, Harriet Beasley, Flore Lafaille
Two guest golfers are also part of the Stirling squad - Renfrewshire's Scottish Junior Internationalist Alyson McKechin (Elderslie), who intends to apply for a September 2011 entry place at Stirling, and English Curtis Cup player Holly Clyburn (Woodhall Spa).
The squad is competing in the following events: the Harder Hall Invitational, Sebring; the South Atlantic Championship, Ormond Beach; and the Doherty Championship match-play event at Fort Lauderdale.
The Stirling women's squad is accompanied by Renfrewshire and Lanarkshire's coach, Stirling graduate and former British amateur internationalist, Lesley Mackay who is now the Head Coach at Playsport in East Kilbride.
The first event which was completed yesterday was the the 56th annual Harder Hall Women’s Invitational and it had an outstanding beginning with record setting scores in the first round and ended with a most exciting finish with the top three players all having the opportunity to win in the last three holes.

Email ThisBlogThis!Share to TwitterShare to FacebookShare to Pinterest
Labels: Elderslie

The Amalgamation Roadshows postponed because of the snow have now been re-arranged and invitations sent to the affected clubs and counties. The new dates are:

It would be helpful if those planning to attend would confirm their attendance by email to secretary@slga.co.uk as soon as possible.
Posted by Carol

Papers for the Annual General Meeting to be held in the Dewars Centre, Perth on Saturday 15 January 2011 have been sent out on, 20 December 2010. The following were enclosed in the mailing and may be accessed by clicking on the links:

HAPPY NEW YEAR TO ALL ALL READERS 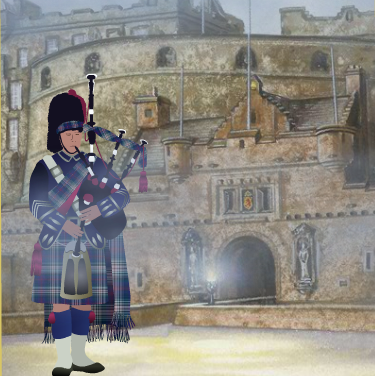 CLICK ON THE PIPER TO SEE YOUR CARD
Posted by Carol