The Greenlees Trophy Lunch and Presentation of Trophies was held today at Bothwell Castle Golf Club. Most Clubs were represented and were treated to a beautiful lunch.
Greenlees Secretary Anne Dunn chaired the lunch and thanks go to Lynda Smith (Douglas Park) and Sheena McDonald (Milngavie) who in the absence of your webmaster and controller of the Greenlees Result Grid took some photographs. Click on the small thumbnail below to see more. (Then slideshow)
After the lunch Anne Dunn this is what she said ---

"It seem a shame to spoil such a lovely lunch by my having to speak but there are some things which must be said. I would like to thank Bothwell Castle, on your behalf, for a lovely lunch and a very welcome glass of wine on arrival. One of the nice things about the Greenlees Lunch is that you get to visit other clubs – even if it is only one every 27years!!
Before I get on to the main item on the Agenda may I remind everyone about the Fixture Meeting which will be held here on Tuesday 19th November at 10:00 for 10:30. At that meeting we will be welcoming a new team to our competition – namely Ayr Bellisle. It is exciting to have another club joining us. It is against the trend of many competitions which are struggling to get competitors that teams want to join the Greenlees. It says a lot for the reputation of the competition and the friendliness of the participating members.
Now to the main part of the afternoon – the Presentation of prizes. I would like to invite the Lady Captain of Bothwell to do the honours.
The winner of Division 1 is, for the fifth time in succession, Milngavie.
This year they won with 52 points – not however a record as Haggs Castle won with 52 ½ in 2008 albeit Division Three . Congratulations girls I think we will have to find a way of handicapping you to give the rest a chance.
The runners-up were Loudoun. Congratulations – your third year in the competition and after winning the 3rd Division then the 2nd Division you are now the runners-up on the 1st. Perhaps you will knock Milngavie off their perch next year.
Division 2 has a return winner in Douglas Park. Welcome back to Division 1 next year.
Prestwick St Nicholas were the runners-up in Division 2 – much to the relief of Kilmacolm!!

The Third Division winners were Lenzie. Congratulations to them. The runners-up being Hilton Park.
We have had a wonderful season this year and the competition has gone very smoothly. I wish you all well next year both those who will remain in the same Divisions and those who will have new opponents.
I hope you all have a safe journey home and look forward to seeing you at the meeting in November" 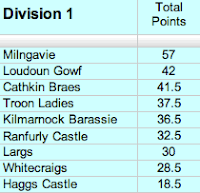 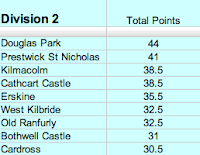 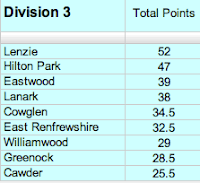 FROM THE SLGA WEBSITE
West of Scotland Champion Megan Briggs continued the recent dominance of the Briggs family at the Champion of Champions by winning (Sunday 20th October) over Glasgow Gailes after her younger sister Eilidh had won the event for the previous two seasons.
On a day that saw some heavy showers mixed with bursts of sunshine a field of 11 players were competing in the season ending event and Megan with a score of 72, five shots under the CSS of 77, proved too strong for the quality field which included the current Scottish Champion Alyson McKechin and Girls Champion Connie Jaffrey.

Eilidh Briggs (Kilmacolm) won the Scottish Ladies’ Golfing Association’s Girls’ Order of Merit three years in a row from 2009. After an impressive list of results, she has been crowned this season’s Senior Order of Merit winner.
Eilidh collected 2075 points to finish ahead of Scottish Ladies’ Amateur Champion Alyson McKechin (Elderslie) with Ailsa Summers (Carnoustie Ladies) in third place. Megan Briggs (Kilmacolm) – Eildih’s older sister – was fourth.
“I was delighted with the year,” said Eildih, a Stirling University physical education student. “I was consistent all season and really performed in the big events.
“I had top 15 finishes in the Scottish, Welsh and Irish Opens and not many players do that. I had the chance to win a couple of times and I learned a lot from the year. It was good that my form didn’t go up and down. It was steady throughout.”
In her third year at Stirling, the 20-year-old is grateful for the help she receives from the University. “It is tough trying to do everything, but I love the fact that I am adding to my education while my golf is still improving,” she said. “Everyone at Stirling helps me to combine both.”
A member of the Home International team at Scotscraig – as was Megan – Eilidh was disappointed that Scotland finished with the wooden spoon, but she could be proud of a personal haul of two foursomes wins and two singles points.
“We had a very new, young team and a lot of the matches were very close (Scotland drew with Ireland) so there were encouraging signs, she pointed out. “Also, a lot of our players are in the US so were unavailable.”
With another two years of study at University, Eilidh is not looking too far ahead. But golf definitely features in her future plans. “My goal is to get a GB and Ireland cap and finish my degree before making any serious decisions about my golf,” she added. “This year has been very good and I just want to keep getting better.”

CONNIE IS 3RD IN THE JUNIOR CHAMPIONS OF CHAMPIONS

Lauren Whyte (St Regulus) came out on top of a quality field yesterday (Sunday 13th October 2013), at the Girls' Junior Champion of Champions held at The Dukes course.
Conditions were less than favourable with a strong cold wind and heavy showers making it very difficult, however the field made up of National Champions, County Champions and Internationalists battled the course and Lauren pipped team mate Nicola Robertson (Dunblane New) by 1 shot to win the title with an impressive 73.
National Girls' Champion Connie Jaffrey (Troon Ladies) was 3 shots back with a 76.
Posted by Carol

Could you please reply to me as to whether your club will be represented, at the moment only two members from each club, and whether you have any special dietary requirements
.
Subscriptions for next season are due, £15 with cheques made payable to Greenlees Trophy.

Solheim Cup player Becky Brewerton from Wales made her debut on the Paul Lawrie Scottish Ladies Open Tour at Drumpellier Golf Club today.
But it was another Ladies European Tour player, American Beth Allen who won the top prize of £750 with a one-under-par round of 71.
Beth won by a single shot from another who has LET experience, Kiran Matharu from Leeds. Kiran's 72 earned her £600 and she is fast regaining the confidence that made her a Curtis Cup player in her amateur days.
Another past Curtis Cup amateur, Michele Thomson from Ellon, finished third on 74 and earned £500.
Brewerton finished outwith the money list with an 80.
Ranfurly Castle amateur Carol Fell almost had a hole in one at the fifth.
Playing off a handicap of nine, Carol did well to get round in a gross 81 and she won the golf balls prize with a net 72.
Gemma Webster, who has come on to her game in the past week or two, had the longest drive of the day at the designated hole.
The inaugural Paul Lawrie Ladies Open Tour ends next week with an 18-hole competition at Craigielaw next Wednesday, followed by the 36-hole Tour Championship over the Marriott Dalmahoy East and West Courses on Thursday and Friday next week.

Carol Fell, who is also a member of Douglas Park Golf Club, looks back on the Drumpellier day from an amateur's point of view.
"I was about 6 inches away from a hole in one at the fifth. Played all the short holes well. Got another 2 at the seventh -- about a 18 inches away. At the next short hole the 12th -- should have had another 2 - missed a 2ft putt and had a 3 and then at the 14th missed the green - chipped on and sank the putt for a 3 -- So the short holes were good!
"Beth Allen played really well and I enjoyed watching her game. Delighted to win a dozen golf balls for the best net -- should keep me going!"

NOTE FROM COLIN FARQUHARSON: Carol Fell only played in the Paul Lawrie Tour event as a personal favour because we were short of entries. So nice to see that she did not go away empty-handed from Drumpellier.

CLICK HERE TO SEE SOME PHOTOS
Posted by Carol