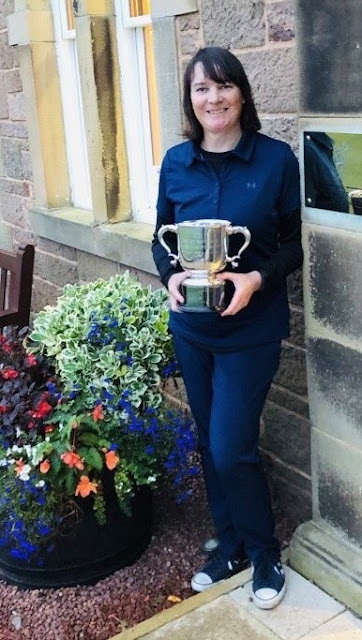 The SVLGA and Captain Karen Ballantyne are delighted to announce the team who will be travelling to Dublin to play against the Irish Seniors at the Roganstown Course on Sunday 29th and Monday 30th March.

We will be taking the Mary McKenna Perpetual Trophy back to Ireland and we do hope it will be making the return journey with us on the Monday.

Particular congratulations to 'baby vet' Karen Ferguson-Sneddon (pictured above) who turned 50 at the end of 2019 and will be making her debut in the event.  Karen is pictured here after her impressive win at the East of Scotland Championship last year.
Posted by Carol

Wendy is celebrating a very Big Birthday today.
A joint card has been sent to her by email Click here for her Birthday Card  -
If using a mobile phone (turn to landscape or on a PC click on the small square at the bottom right to get full screen)

Wendy would like you to know that she is still having an active life and wants to prove it to you all !! -- Click Here


Amy Boulden will return to the Ladies European Tour in 2020 after winning Qualifying School at La Manga Club by three strokes from Magdalena Simmermacher and Alison Muirhead.

Alison Muirhead, who topped the field in Pre-Qualifying at La Manga, which was her first tournament as professional, ended with a 71 to take the third card.

The 21-year-old Scot, who lives in Dubai, said: “It feels amazing. I never expected this to be the outcome. To do last week and this week and finish first and second, I’m really pleased. It’s been a long two weeks and I’m excited for the tour and feel like I’m ready to be playing.
Today, I didn’t have my A game, but I kept it together and sunk some big putts, which gave me a lot of confidence coming into the last five holes.
Amy played spectacularly and it was amazing to watch and be part of it.”

Alice Hewson from Hertfordshire in England took the final spot in Category 5c in fifth place on five-under-par.

Amy Boulden and Alison Muirhead share the lead heading into the final round of LET Qualifying School at La Manga Club in Murcia.

The leaders are tied on five-under-par 283 after four rounds, including two rounds on the North and South Courses respectively.

After a tough third round of 77 on the North Course, co-leader Muirhead was delighted to bounce back with a bogey-free three-under-par round of 70 on the South.
The 21-year-old Scot said: “It was really steady today and I enjoyed it. The conditions altered during the round so it was good to keep it steady and hit a lot of greens.
I just kept lipping out for birdie, so it was very nice to see the ball rolling close today and to bounce back, especially after yesterday.

I’m very pleased. “I’m feeling really good heading into tomorrow. It’s obviously another day, but I feel like my putter is working well. I didn’t hole as many putts today, but you obviously save them for the next day, so I’m really looking forward to tomorrow.”

Unfortunately none of the other Scots made the final Cut.
Hannah McCook and Heather Macrae missed the final cut by 3 shots. Rachael Taylor and Gabrielle Macdonald were the other 2.

MUIRHEAD STORMS CLEAR IN SPAIN AFTER ROUND 2

The Ladies European Tour Qualifying School got underway at La Manga Club yesterday (Wednesday 22nd January) in somewhat benign conditions in comparison to what had been experienced over the previous couple of days, with Storm Gloria causing destruction at the resort in Cartagena, Spain.

Alison Muirhead, who last week won the Pre-Qualifier event for the Final Stage of Ladies European Tour Qualifying School, continued her impressive form firing a superb six-under-par 67 around the South Course at La Manga Club in Cartagena, Spain.
As the sun finally came out, Muirhead’s game warmed up and she rolled in seven birdies on the way to posting the round of the day, to open up a five shot lead after two rounds. The 21-year-old from Scotland was delighted:
“I am really enjoying La Manga Club. The South Course was playing really good today, it was playing long and the greens were in superb condition. 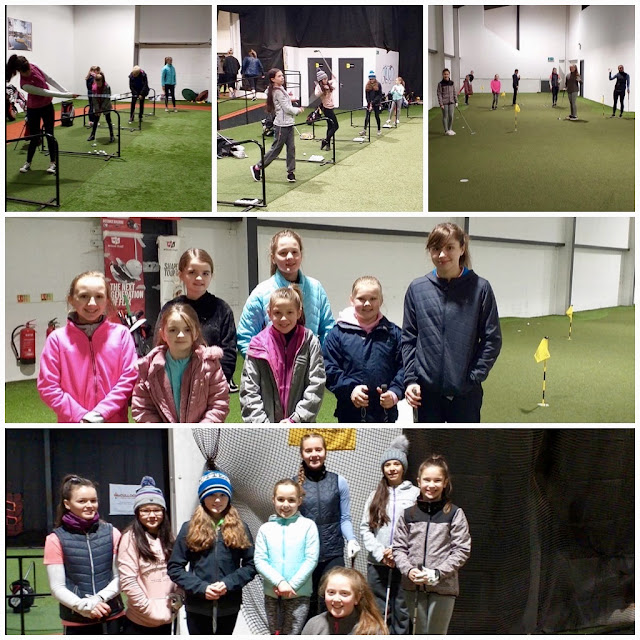 15 Renfrewshire girls took part in a fun practice session on Sunday morning at a rather chilly Fairways Indoor Golf Arena in Coatbridge.

Most of them were young & quite new to golf but keen to get their handicaps when the season begins.

It was great to meet some new faces which is encouraging for the future of golf. They rotated round 3 different stations to practice full shots, chipping & putting.

Many thanks go to the "coaches" of the day- Sandra Littlejohn , Donna Jackson and Liz Stewart and Bobby Rushford & his staff at Fairways.

Thanks go to Gillian Kyle for the report and photos.
Posted by Carol

As many people know, for the past three years I have been working with the Congaree Global Golf Initiative, an amazing program that helps high potential, but financially disadvantaged young people achieve their dream of playing college golf.

Each summer, dozens of students get the opportunity to travel to one of the most incredible courses in America to learn the skills needed to reach their athletic and academic potential.

This year, we’re also excited to add an additional CGGI camp at ARCHERFIELD, Scotland to help more students in Europe.

WE ARE ACTIVELY LOOKING FOR GIRLS FROM  SCOTLAND and would appreciate any recommendations.

If you know of a deserving high school golfer who would be a good fit, please reach out for details on how to nominate them for the program.
My email address is lornekelly100@gmail.com or by all means PM me -- CLOSING DATE 22ND JANUARY 2020 FOR NOMINATIONS

From the Ladies European Tour Website
Scotland’s Alison Muirhead took control of the Pre-Qualifier for the 2020 LET season after firing a sensational career best seven-under-par 64 over the North Course at La Manga Club in Cartagena, Spain.
The 21-year-old from Scotland moved to nine-under-par and opened up a five shot lead heading into the final round. A delighted Muirfield reflected: “I started pretty slow on the front nine and made the turn in one-under-par. Ironically, on my back nine the wind picked up but so did my game.
“I birdied the tenth hole and it really gave me momentum. The highlight of my round came at the par-5 12th hole which I eagled. I hit a superb four iron from 225 yards and rolled in a 25 foot putt. Coming down the stretch I played some excellent golf and rolled in four more birdies.”
Alison, was born in Johannesburg and currently lives in Dubai where she practices at Jumeirah Golf Estates. She added on a memorable day in Spain: “The North Course is a tough test and has some narrow tee shots. I have been working hard on my game and I am so happy to shoot my best ever score when it really matters. There is still a lot of golf to be played but this has given me a lot of confidence. My Mum is here watching and I’m sure will be ecstatic for me.”
Scotland's Heather Macrae finished in 16th place and Hannah McCook just made the cut tied 58th.
Kimberley Beveridge and Heather Stirling missed the cut
The top 60 players and ties will make it through to final stage of Qualifying which will be played over the North and South courses 22nd – 26th September.
FINAL SCOREBOARD
Posted by Carol 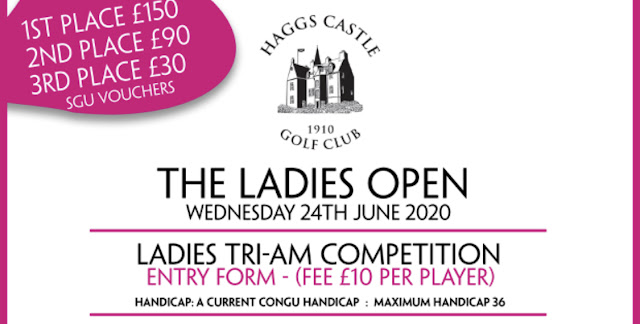 Email ThisBlogThis!Share to TwitterShare to FacebookShare to Pinterest
Labels: WHS 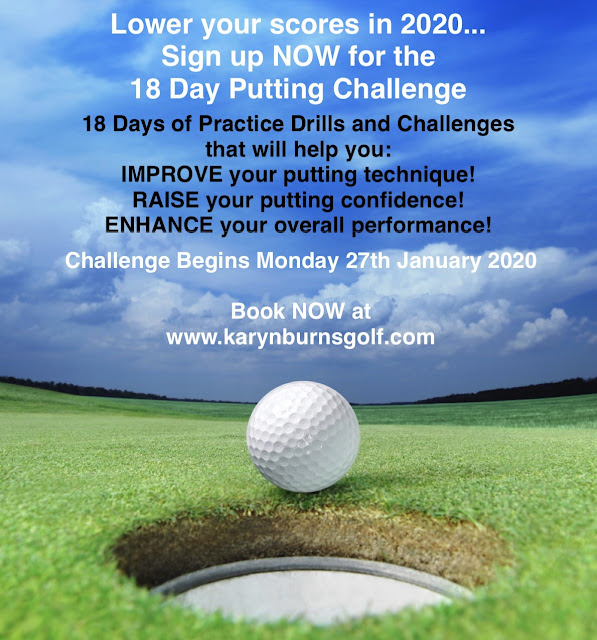 It’s BACK following popular demand......The Putting Challenge!  Once you sign up you can take part via Facebook OR email.  You will receive DAILY instructions on your task from the 27th January until 15th February.

All you need is a decent putting surface at home (carpet or putting mat) OR of course you can use the drills at the place where you practice most, indoor OR outdoor! 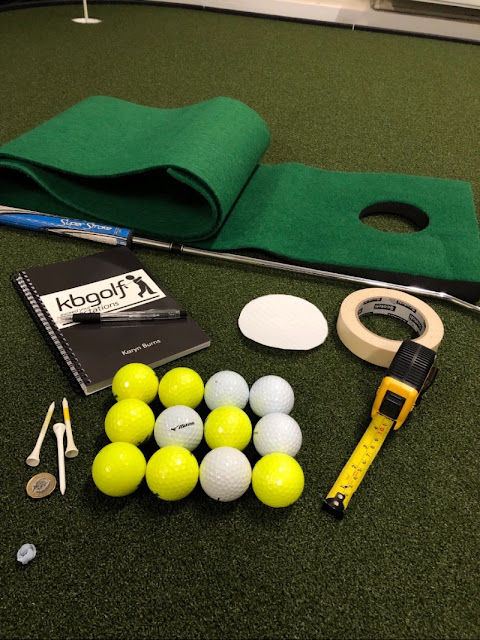 You will need another few things to complete the practices and drills.....see the picture above!
£45 for 18 Days of Practices and Drills that --
WILL MAKE YOU A BETTER PUTTER!

GET INTO GOLF WORKSHOPS 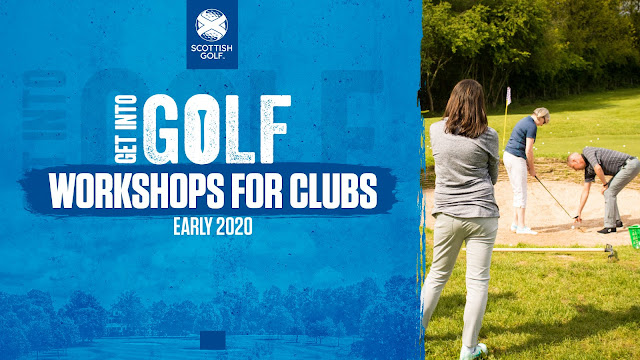 To support clubs, Scottish Golf are delivering a series of free-to-attend Get into Golf workshops in 2020, giving Clubs insight into what the Get into Golf programme is as well as how your club can introduce new people to the game.

At the workshops, you will be able to learn from other Clubs who have been involved with Get into Golf and understand how it has helped them to increase female membership, create an inclusive environment, introduce flexible or social memberships and much more.

These workshops are free-to-attend for all affiliated Scottish Golf Clubs and a full list of where, when and how to book a place at your local workshop can be found below:

The Scottish Disability Golf & Curling charity, will launch its second HUB later this month at the Elmwood Golf Club near Cupar, where golfers from as far afield as England and Northern Ireland will help tee-off the new project.

PGA Students from Elmwood’s College, representatives of the Elmwood Golfing Society and SDGC members , will provide some tips and tuition for existing golfing and new members with disabilities on Friday 31 January from 10:00.

An “SDGC HUB” is a recognised club/facility that has a positive record on encouraging people with a disability to come and enjoy the game. Appropriate access, friendly and helpful staff and qualified instructors with experience of delivering coaching to a range of disabilities, which ultimately creates a positive environment and experience for our members.

Jim Gales, the Secretary of the charity said, “Funding, which helped to establish Scotland’s first disability hub  in St Andrews earlier this month, has come from Trusts and Foundations across the UK and each HUB session can include lessons, putting and other golf practice facilities, as well as the most important social side of the game, with members mixing with PGA Professionals, Coaches and our volunteers.”

More on the SDGC can be found at -- by clicking here

Email ThisBlogThis!Share to TwitterShare to FacebookShare to Pinterest
Labels: Advertise on this site, disabled golf

LOOKING GOOD FOR GOLF -- CLOSING DOWN SALE - FIND YOURSELF A BARGAIN 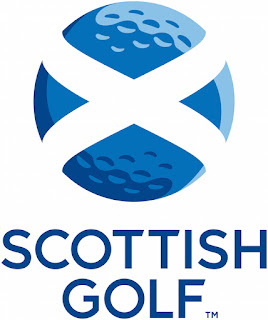 As preparation for the 2020 golf season continues, Scottish Golf would like to inform you that the Central Database for Handicaps (CDH) will transition to a new software provider over the coming days.
While disruption is expected to be minimal, golf clubs will experience some changes at interface over the next 10 days. A user guide for the new CDH with information on credentials for accessing the new system will be issued to you in due course.
Should you have any urgent queries, please do not hesitate to get in contact by emailing handicapping@scottishgolf.org or calling 0131 339 3987.
Kind regards,Scottish Golf Handicapping Team

As of the 14th January the entry list is now full up and any further entries will be added to a reserve list.
Posted by Carol

HAPPY NEW YEAR TO ALL OUR GOLFERS AND READERS 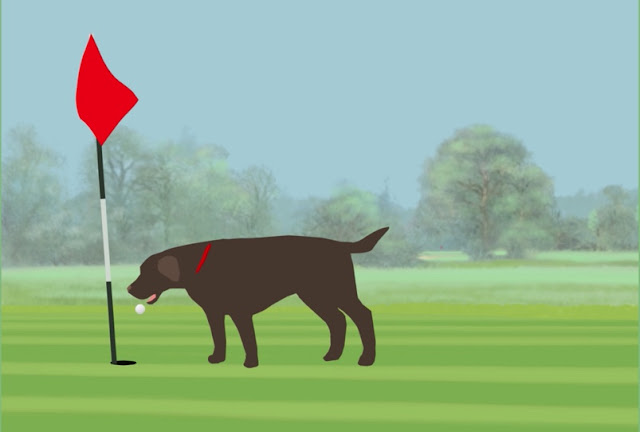 CLICK HERE TO SEE YOUR NEW YEAR CARD
Hope you all have a good golfing season in 2020 and the weather is kind !!
Please send me your stories and a photo if you have it - to keep this website going as I know there is a lot of news out there that is not being reported and I need your help.