The West Vets Championship matchplay started at Renfrew Golf club today. To read all about the ties go to the West Vets Website
Posted by Carol

CLICK HERE for the Championship Draw.
Posted by Carol

The 41st Douglas Park "Eagle" Open Mixed Foursomes is on Sunday 7th July.
The unique and impressive bronze eagle trophy, designed by Mr F. Malcolm Robertson of Glasgow School of Art in reference to the Roman Eagle emblem of the Club,  was commissioned by and presented to the Club by Past Captain John and Past Ladies' Captain Jean Watson in 1972. One of the pioneering events of its kind, the tournament continues to attract competitors from far and wide.
Why not get an entry form now by clicking on the following link
EAGLE ENTRY FORM
Posted by Carol 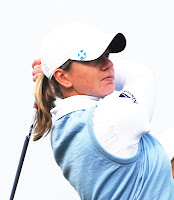 Charlie Hull, England, was in second place. -- All 3 players were part of the 2012 Winning Curtis Cup Team at Nairn,
To read the full report go to the  --- KIRKWOOD GOLF WEBSITE

TROON'S EMMA HALE IS RUNNER UP IN THE MUNROSS TROPHY

The Ladies Open day at Douglas Park Golf Club is on Friday 28th June 2013,
Tee Off Times 8am - 4pm
Entry Fee per Couple £10.00 per Couple -- Scratch and Handicap prizes

FROM THE SLGA WEBSITE
REPORT BY ELSPETH BURNSIDE
Alyson McKechin (Elderslie) fulfilled a childhood dream when she defeated Clara Young (North Berwick) 3 and 2 to win the Scottish Ladies’ Amateur Championship at Longniddry.

“Winning the Scottish Championship is something I have thought about ever since I started playing golf,” said the 19-year-old, who had her Dad, Ian, as her caddie. “I am proud to be the first winner from Elderslie and hope it inspires other girls at the club.” With torrential rain making conditions far from easy,
Alyson birdied two of the first three holes and moved three up at the short sixth where Clara found trouble from the tee. Aiming to become the youngest ever winner, the 16 year-old East Lothian girl struggled to find the fairway in the atrocious conditions and was five down at the turn. But she then made a great, late comeback, winning three holes in a row from the 13th and was just two down with three to play.

However, Alyson held her nerve and a winning par three at the short 16th prompted the shake of hands.

“I started out very well but the mistakes started to creep in as the weather deteriorated,” said the new champion. “That let her in and she took her chance and it was beginning to become very close. “It’s great to win and it was good to have Dad on the bag. He kept me calm and made sure I didn’t get too far ahead of myself.
“I started playing golf when I was 12 and have come through all the Scottish squads from development upwards.
This just feels so special.” Clara admitted that Alyson had played the better golf. “She put me under a lot of pressure at the start,” she said. “But I can take a lot of positives from week. I would certainly have taken a place in the final at the start of the Championship.”

Catriona Matthew, who lives in North Berwick and is a Vice-President of the Scottish Ladies’ Golfing Association, was one of the brave spectators that watched all 16 holes.
“They are both great players and good to see two youngsters in the final,” said the three-time former champion and the only Scot to win a major title at the 2009 Ricoh Women’s British Open Champion.

“It certainly has been a great start to the season,” said the girl who works part-time at the Glasgow Indoor Golf Centre. “And I’ll be back to defend at Prestwick next year.”

Email ThisBlogThis!Share to TwitterShare to FacebookShare to Pinterest
Labels: Elderslie

WEST OF SCOTLAND WEBSITE IS CURRENTLY HAVING A REST

Due to some difficulties encountered by your Webmaster Carol Fell at the moment, trying to keep up with all golfing news has been rather on the back burner.
This West of Scotland Golfing Website will be temporarily not kept up to date and therefore for all news the following links should keep all our readers up to date on the golfing front.
The Greenlees Matches are now underway and  the links to all the results are on the RHS of this website.