Carol and Gladys eat too much turkey

Carol and Gladys were at the Christmas Lunch at Douglas Park today. As usual they ate too much and sang a lot of Christmas Carols 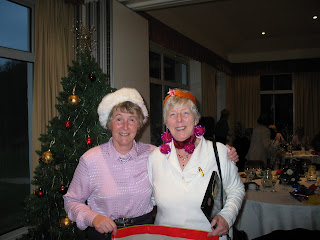 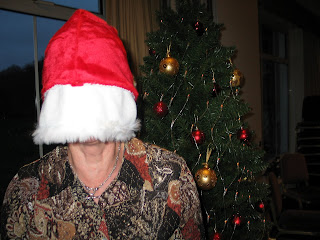 Gillian McRae has a Hole in One 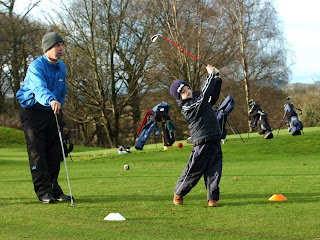 Dean Robertson, the reigning Scottish PGA champion and Italian Open winner in 1999, took time out of his schedule this weekend to encourage a new generation of local golfers.

On Saturday, the Paisley 36 year old gave a clinic to a group of children who are being coached by Erskine Golf Club volunteer coaches, through the national junior golf strategy, clubgolf. 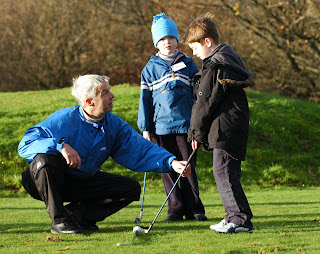 Encouragement from the European Tour player comes at a perfect time for the youngsters. Whilst other golfers in Scotland have hung up their clubs for the winter, the children are mid-way through a coaching course organised by the Club.

“This group of children had an Easter starter session, then a summer school, and now we are giving them a six week winter slot,” said Erskine Golf Club’s Junior Development Co-ordinator, Janette McCartney.
“We wanted to keep their enthusiasm going so we are very grateful that Dean could spare time this weekend. The children loved the experience and we hope that the word will spread and we will attract more juniors next year.” 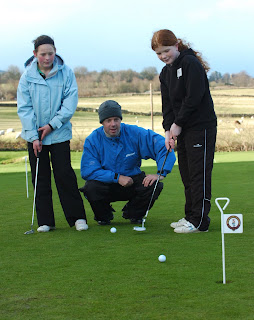 Erskine has always had a strong junior section and a welcoming approach to its young players. Janette, together with fellow club members, has made an extra commitment to encourage local children to take up the sport by becoming the only club in Renfrewshire to offer clubgolf coaching.

Launched by Colin Montgomerie and First Minister, Jack McConnell in 2003, clubgolf aims to create the opportunity for every nine year old in Scotland to experience the game from 2009. Six Erskine GC members have since become qualified to coach the programme’s Level 1 course. This winter a further three will become trained to join them as volunteer coaches.

“We did have a big junior section before but we realised that they weren’t going to be around for ever unless we did something about it,” admits Janette

“After six of us became qualified to coach last year, we advertised in local papers, spread the word amongst our members, I approached the Active Schools Co-ordinator and got permission to send flyers around local schools.

“We attracted over 50 children, most of whom hadn’t played golf before. One of my main reasons for doing clubgolf was we had no girl players but now we have five as a result of this programme.”

In addition to creating this Christmas treat for the current children on the programme, the Club hopes that Dean Robertson’s clinic this weekend will generate further interest from other local children.

“The children on our programme have varying levels of ability but they are all enjoying it and improving,” said Janette. “Some of them are only just learning to hold the club whilst others are already at the stage where they are ready to move on to being coached by our local Pro, Peter Thomson, who can take them to the next stage.

“We start the coaching again at Easter time and now that we have a larger group of coaches, I’m hoping we will get a similar number of children from the local community signing up for the course.”

Dean Robertson said, “Erskine Golf Club is helping the development of golf in Scotland by giving these local children the opportunity to play golf at an early age in a fun environment.

“The volunteers are doing a fantastic job in teaching these children the fundamental skills. Golf programmes like this one will provide the required platform from which these kids can follow their dreams and aspire to one day play like their golfing heroes.”

- clubgolf is a partnership between the Scottish Golf Union, the Scottish Ladies' Golfing Association, the Professional Golfers' Association, the Golf Foundation and sportscotland. The strategy has been developed as a direct result of the Scottish Executive's commitment to introduce every nine-year-old child in Scotland to the game by 2009.

- clubgolf is funded by the Scottish Executive which has committed £500,000 per year to the scheme through sportscotland until 2009.

-  As Scotland's national junior golf strategy, clubgolf is backed by Scotland's most famous golfers, Paul Lawrie, Sandy Lyle, Catriona Matthew, Colin Montgomerie, and Scotland's First Minister, Jack McConnell, MSP and Sports Minister, Patricia Ferguson, MSP. It aims to provide new opportunities in the game for every child in the country and to increase participation in the sport by adopting a totally new approach to the development of junior golf.

-  clubgolf has been introduced at a point where, of the 260,000 members in the 580 clubs north of the border, the average age is between 42 and 44 years old. This figure is likely to rise in line with the demographic trend of an ageing Scottish population. Although memberships have grown at a rate of just under five percent during the past decade, there has been an increase of almost 20 percent in the number of courses built over the same period.

- clubgolf aims to build on existing traditions and club infrastructures to develop a new and innovative approach that will introduce new participants to the game and secure the sport’s future.

-  Clubs across Scotland are playing a vital role in the clubgolf strategy. Following clubgolf’s six-week firstclubgolf course, children have the opportunity to progress to the second phase of clubgolf's Player Pathway, Stage 1. Hosted by their local clubs, Stage 1 is a 23-hour course, covering the fundamentals of putting, chipping, full swing, rules and etiquette, taught by the club's fully trained volunteer coaches. After Stage 1 there are a further four stages on the Player Pathway.

Want a new idea for Christmas

Alison Finlay Whitecraigs Vice Captain does Kinesiology and if you feel you could with a little help over winter Why not visit her 2 websites and see if she could help you.
For further information on Kinesiology or Aura - visit Alison Finlay
Looking for a present the try some Aura-Soma, GNLD and Flower Essence purchases at Completely
Natural Website
Posted by Carol

Email ThisBlogThis!Share to TwitterShare to FacebookShare to Pinterest
Labels: Advertise on this site, Whitecraigs

Can you spot the people 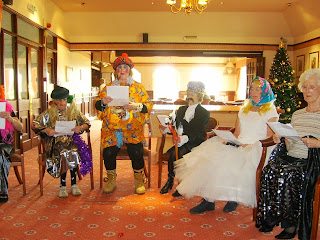 Today was supposed to be our Xmas shotgun. Instead we had a beetle gun and then entertainment from Cinderella. See if you can spot anybody in disguise. (Click on the photo to enlarge and the the back bar or your toolbar to come back to this page)
Posted by Carol

Cochrane Castle is well represented in the County Team

Cochrane Castle was well represented at the West Division women’s inter-county team golf championship at East Renfrewshire Golf Club. Gillian McGinlay, Donna Jackson and Kate O'Sullivan helped Renfrewshire Ladies to a clean sweep by defeating Lanarkshire, Dunbartonshire and Argyll. Renfrewshire Ladies thenadvanced to the Scottish Finals at The Hirsel Golf Club, Coldstream on September 22 to 24 where Kate who went back to the States was unavailable. However Donna and Gillian helped Renfrewshire be runners up to Fife who were the eventual winners
Posted by Carol

Carol Fell won the Turkey Competition over Douglas Park Golf Course today. Itwas played over 13 holes and she won a lovely bottle of wine for her efforts
Posted by Carol 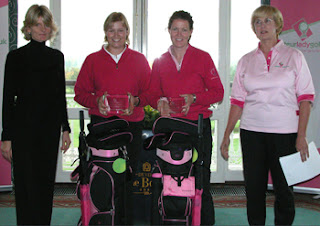 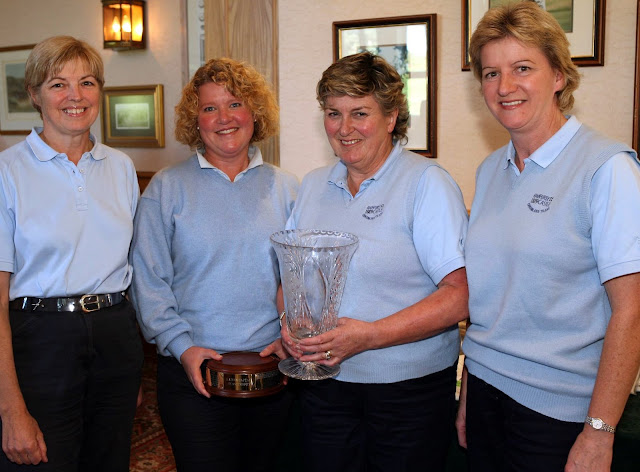