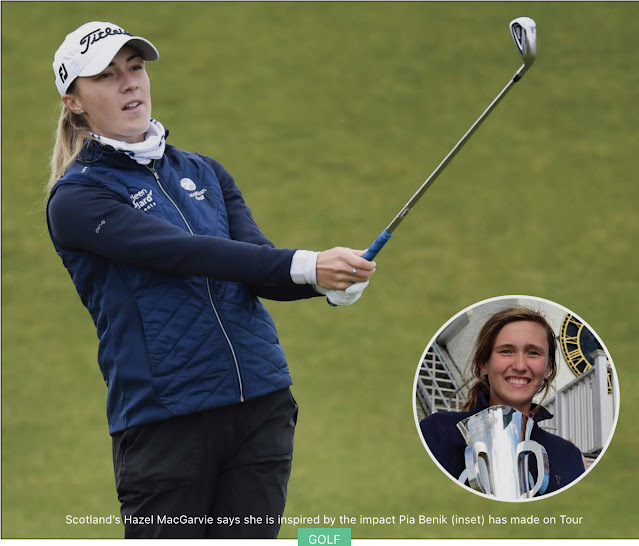 Click here to read in the Glasgow Herald by Nick Rodger 15th January 2022
Those of you who keep an eye on the amateur golf scene may recall the name Pia Babnik. She was the Slovenian 15-year-old who romped to victory in the 2019 Helen Holm Scottish Women’s Open at Royal Troon and left the rest of the field so far behind, they may as well have been playing in the 2018 edition of the championship.
Babnik subsequently turned pro and, at just 17, won on the Ladies European Tour last season as she enjoyed the kind of explosive rise you’d get from the launch pad at Cape Canaveral.
For Troon rookie Hazel MacGarvie, the exploits of Babnik, and all those other youthful talents who have made big impressions on the women’s circuit, have been particularly eye-opening.
MacGarvie is the latest Scot to join the Ladies European Tour, having earned her card at December’s qualifying school. Far from being intimidated by the daunting standards set by the likes of Babnik, however, the 22-year old is inspired.
“There are so many young girls coming through and winning and it shows what is possible,” said MacGarvie. “It’s not players who have been on tour for 10 years. It’s girls coming straight from the amateur game, going out there and really making a name for themselves. It’s great to see.”
MacGarvie, who burnished her own impressive amateur career by joining decorated names such as
Catriona Matthew and Annika Sorenstam on the St Rule Trophy, decided to make the pro plunge a few weeks before the q-school process got underway.
Some may have viewed that as a bit of a gamble. She could, after all, have entered q-school as an amateur to see how she fared but MacGarvie was eager to start a new chapter.
“I’d played amateur golf for a long time and I wanted a fresh challenge, whether that was pro golf or some other job” said MacGarvie, who was given a taste of the professional life with a couple of outings on
Paul Lawrie’s Tartan Pro Tour.
“I’d played some of Paul’s events and thought, ‘you know what, I may as well do it and try to give myself a chance to earn some money’. Getting my card at q-school justifies the decision.”
Negotiating nine rounds of the qualifying school rigmarole is not for the faint-hearted but, amid an anguish-laden atmosphere that just about leaves the debris of nibbled fingernails scattered on the greens, MacGarvie stood firm. Well, apart from a late shoogle.
“I double-bogeyed my final hole and walked off thinking ‘I’ve just bottled this coming down the 18th’,” she said of a slip that, mercifully, didn’t prove costly in the final analysis. “I had no idea at the time I could make a double bogey and still be safe.”
With that prized card tucked safely in her pocket, MacGarvie is now facing up to the reality of being a tour player. “I don’t have a management company or any sponsors just now so it’s a bit of a do-it-myself approach at the moment,” she said. “It’s quite eye-opening. Going from the amateur game, where you are well supported, suddenly you are on your own. The early season events on the tour are in Asia and Africa and I think they may be difficult for me financially. I’m going to wait until the European swing and kick on from there.”
A graduate of Stirling University, MacGarvie’s golfing education began as an eager four-year-old. As a teenager, meanwhile, she got the opportunity to play alongside Ryder Cup player Thomas Pieters over her home course of Royal Troon prior to that year’s Open. There was a slight hitch.
“It was on the same day as my school maths exam so it was perhaps not my best decision to play golf,” said the former Vagliano Trophy player with a reflective chuckle.
“But we played early in the morning. And I passed my exam by the skin of my teeth.”
Having made the grade in the stern q-school examination, MacGarvie is now relishing the prospect of a 2022 campaign full of new opportunities and experiences on the tour.
“It’s a combination of nerves and anticipation,” she said. “I don’t feel any different to when I was an amateur golfer at the moment but I’m sure it will kick in when I get to my first event and think, ‘wait a minute, this is my job now’.”
Posted by Carol

LOUISE DUNCAN AND HANNAH DARLING ARE INVITED TO AUGUSTA 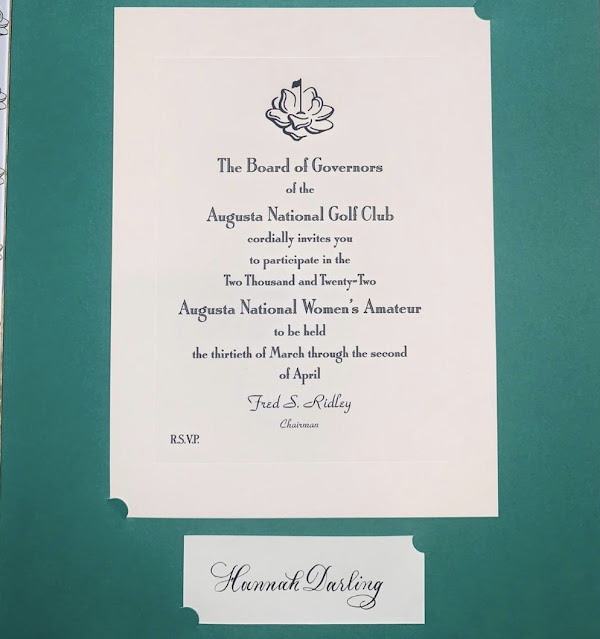 Hannah Darling's official invitation for the Augusta National Women's Amateur in late March/early April, when she will be flying the Saltire with Louise Duncan (West Kilbride)
The 18-year-old Broomieknowe player secured her spot in the event, which concludes at Augusta National the Saturday before The Masters, by winning the R&A Girls’ Amateur Championship last year.
Along with West Kilbride’s Louise Duncan on the back of her success in the R&A Women’s Amateur Championship, the pair will become the first Scots to compete in the prestigious tournament.
To read the full article in the Scotsman by Martin Dempster -- CLICK HERE
Posted by Carol

It is with great sadness I tell you of the death of Margaret Rodgers.

Margaret was an Honorary Member, Captain (1997-98) and President (2008-10) of Midlothian County Ladies Golf Association and one of the County’s greatest supporters.  Many of you will know she was also the creator of Michaela, the much loved mascot of the County Squad.

Captain, and a member for most of her life, of Turnhouse, Margaret was a talented player, selector and administrator, and has made a huge contribution to Scottish golf over the years.

I am sure many of you will have a connection, and fond memories, of Margaret. She will be deeply missed.

The funeral is private.

She had also held various SLGA posts in the past, including chairman from 2005-07, and was made an honorary member of the MCLGA in recognition of her work.

In 2006 she led the Scottish Ladies’ Golfing Association and Scottish Golf Union  joint working group to look after the best interests of the amateur game in Scotland. CLICK HERE

All photos - Courtesy of Carol Fell
Tributes to former SLGA chair and Midlothian stalwart Rodgers
By MARTIN DEMP­STER
The Scotsman
14 Jan 2022
Golf is mourning the death of Margaret Rodgers, a Midlothian stalwart who was at the centre of the unification of the men’s and women’s games in Scotland.
Margaret Rodgers, a well known face in Scottish golf, having been at the heart of an initiative that led to a unified body for the amateur game in the country, has died.
Including a spell as Lady Captain, Rodgers, who hailed from Ireland but lived in Scotland for most of her life, was a member of Turnhouse for 46 years, while she was also a member of Gullane.
A low-handicapper in her day, she won the Turnhouse Ladies’ Championship in1986 and1987 and has her name on six of the nine main ladies’ trophies at the Capital club.
“My first memory of her was playing as her partner in a mixed foursomes soon after I joined Turnhouse in the late 1970s,” said Allan Shaw, a former Lothians Golf Association president.
“My trepidation in playing with a lower handicap lady golfer resulted in me leaving us up against the front face of the bunker at the third green. Undaunted, she demolished the face of the bunker and left me with a two-foot putt and we sailed on after that to finish in the top three.”
Rodgers was  heavily involved in the Midlothian County Ladies Golf Association, becoming an honorary member after stints as captain (1997-98) and president (2008-10).
“She was one of the county’s greatest supporters,” said captain Isla Mccrone in a post on the MCLGA website. “She was also the creator of Michaela, the much-loved mascot of the county squad.”
In 2006, during a spell as chair of the Scottish Ladies Golfing Association, Rodgers was part of a joint-working group with the Scottish Golf Union setup to look after the “best interests of the amateur game in Scotland”.
Alongside SGU chair Alistair Low, she was involved in discussing how the then ruling bodies of Scottish amateur golf could work together for the “betterment of the game, irrespective of gender”.
Though encountering some bumps along the way, Scottish Golf, a unified body, was formed on 1 October, 2015.
“I suppose it was a big step,” said low of that working group. “The ladies were very conscientious and helpful and Margaret was extremely encouraging.”
A post on the Scottish Golf website said of Rodgers: “We are grateful for her vast contributions to Scottish golf over the years.”
Former Scottish Golf president June Mcewan first got to know Rodgers when she was chair of SLGA. she said: “Margaret was always very enthusiastic in promoting women’s golf and in working more closely with the SGU and contributed greatly to the game on many levels.
“She was a good listener, and, on a personal level, encouraged me to have the confidence to further my volunteering within the game. Margaret was a gentle lady with a lovely sense of humour and will be sadly missed.”
Six-time Midlothian champion Claire Hargan, who is now the Assistant Director - Rules at the R&A, also paid a warm tribute to Rodgers. “Margaret truly was a great ambassador for Scottish women’s golf and for women’s county golf,” said Hargan. “In the 10 or so years I  was involved with Midlothian Ladies County she was always there supporting the team. She was great fun to be around but, behind the scenes, she clearly put in a power of work for the women’s game in Scotland.”
Posted by Carol