Eilidh Briggs, a member of Kilmacolm Golf Club, had a great run through to the semi-finals of the French Under-21 girls' match-play tournament for the Esmond Trophy at the weekend at St Cloud GC, Paris.
Eilidh lost by 2 and 1 in the penultimate round to the No 2 seed, Germany's Laura Funfstuck, today.
Eilidh who was one down after 10 holes, was the 14th of the 32 qualifiers for the match-play top flight.
To get to the last four, she beat England's Olivia Winning by two holes, the No 3 seed Nuria Iturrios (Spain) by two holes, and Anyssa Harbaut (France) by 2 and 1 in the quarter-finals.
Funfstuck will play the leading qualifier, Natalia Escuriola (Spain) in Monday's 36-hole final.
Escuriola beat Gabriella Cowley (West Essex), winner of the Scottish Under-16 girls' open title last year, by 4 and 3 in the quarter-finals.
Curtis Cup teenager Bronte Law (Bramhall) will play Jessica Vasilic (Sweden) in the final of the second match-play flight for the Cartier Trophy, also over 36 holes.
Bronte, pictured right by Cal Carson Golf Agency, beat the top seed, Spain's Harang Lee, by 2 holes in the morning quarter-finals.
RESULTS
ESMOND TROPHY (top flight)
Semi-finals - N Escuriola (Spa) beat L Migneaux (Fra) at 19th; L Funfstuck (Ger) beat E Briggs (Sco) 2 and 1.

TO VIEW ALL THE RESULTS IN THE MATCH-PLAY TREES

HAPPY EASTER TO ALL OUR READERS 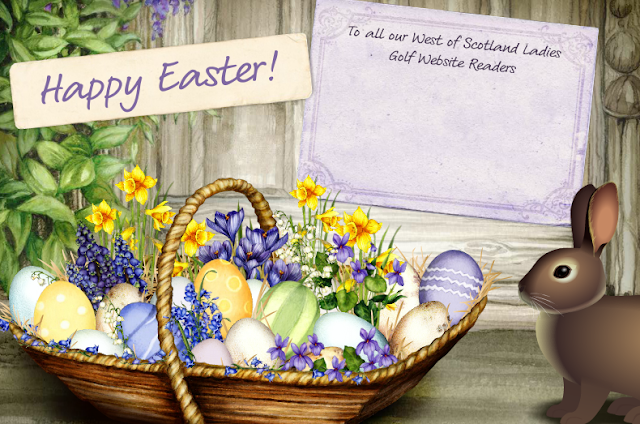 FIXTURES AND DATES FOR THE 2013 GREENLEES TROPHY

The West of Scotland Greenlees Secretary Anne Dunn has now got all the arranged fixtures for the 2013 Greenlees Matches.
You will find all the fixtures and results -- when available by clicking on the links on the RHS of this webpage.
FIXTURES AND RESULTS  and TOTALS GRIDS WHEN AVAILABLE

Enjoy the season and may the best teams win ---- Good Luck to all .
Posted by Carol

Renfrewshire Ladies County Golf Association held their bi annual dinner at Haggs Castle Golf Club on Wednesday 20th March.
To read all about it go to the RLCGA WEBSITE
Posted by Carol

With extremely difficult conditions and Baltic weather all four ladies showed great guts and stamina. The Damson Gin revived them all on the edge of the 15th green!   Bunny must be their oldest winner of this competition – she first won in 1985 !! The salver was presented in 1972 by Miss Norah Wallace.   Together with May, they have now won on six occasions, and they have each won with other partners once.

Following two seasons in charge of the Home International team, Fiona Norris (Hamilton) has been named Captain of the Scottish side for the European Ladies’ Team Championships at Fulford in York in July.

“It is good to be involved with Scotland again this year,” said the former international player. “I am hoping to visit Fulford very soon. I know it is a wonderful championship course and has held many big tournaments in the past.

“Our team will be certainly ready for the challenge and I am sure it will be an advantage that the Championships are taking place in the British Isles. Scotland has many talented players and we will be aiming to put in a strong performance against the very best in Europe.”

Karen Marshall (Baberton) takes over as Captain for the Home Internationals. The Scottish team will have home advantage at Scotscraig from September 11-13. Scotland last hosted the event at Irvine in 2009 when the side finished runners-up to Wales. Scotland went on to win the title at Whitchurch the following season.

Susan Wood (Drumpellier) takes over as Captain of the Scottish Under-16 teams, while Helen Faulds (Douglas Park) extends her period at the helm for the Senior International matches and she will also Captain Scotland at the European Senior Ladies’ Team Championship.

Scottish Golf Support Limited (SGSL), the partnership backed by the Scottish Government to help the country’s young professionals progress in their respective careers, has announced its support to six players following the success of the programme last year.

To read the full report go to the Kirkwood Golf Website

West of Scotland's Kyle Walker posted a 1 under par round 71 in the 2013 Ladies World Championship at Mission Hills in China followed by a 2 under par round on day 2. In round 3 she had a 3 over par 75 and a 4 over par 76 and finished in 37th place on 292.
Carly Booth and the 2 Amateurs Kelsey MacDonald and Eilidh Briggs did not make the cut

Carly Booth however, who was representing Scotland finished on the same score of 292 as Kylie and SCOTLAND finished in 12th position out of 19

To see the final results ---    CLICK HERE
Posted by Carol

The new Paul Lawrie Golf Centre Scottish Ladies Open Tour will be launched at Marriott Dalmahoy's East Course on Thursday, April 18. The 14-event tour, modelled on 18-hole, one-day Alliance lines, will be open to women professionals and female amateurs with a single-figure handicap.
The fledgling tour is also being supported by the RandA.
This is a great chance for some of our low West of Scotland handicappers to see how they fair against the Pro's -- Why not show them how good you are !The opening Edinburgh double-header - Marriott Dalmahoy on April 18 and Ratho Park on April 19 - in the Paul Lawrie Golf Centre Ladies Open Tour.
Check it all out at  www.scottishladiestour.co.uk
Posted by Carol

The 2013 West of Scotland Championship is being held at West Kilbride Golf Club on Sunday 5th May. This year the competition will be over 18 holes and handicap limit is 15.
Eilidh Briggs from Kilmacolm is the holder.
To get your Entry form  then  CLICK HERE
Posted by Carol

To see some PHOTOGRAPHS from the evening CLICK HERE. Then press SLIDESHOW

In the 25th anniversary year of his US Masters triumph at Augusta National, Sandy Lyle MBE spoke of his immense pride after receiving a Lifetime Achievement Award at the glittering 2013 Scottish Golf Awards.

Before a sell-out crowd of almost 600 guests at the annual showpiece jointly-organised by the Scottish Golf Union and Scottish Ladies’ Golfing Association, the two-time Major champion received a richly-deserved standing ovation as he collected the final award of the night. Lyle, who won The Open Championship at Royal St George’s in 1985 before making history by becoming the first Briton to claim the Green Jacket three years later, became one of the world’s leading golfers in the 1980s and is forever regarded as a member of Europe’s ‘Big Five’ during that era.

After amassing 30 professional wins and playing on five Ryder Cup sides, he was inducted into the World Golf Hall of Fame in 2012 and has now entered Scottish Golf’s equivalent, joining previous inductees Sam Torrance, Colin Montgomerie and Paul Lawrie. “It was a wonderful night at the 2013 Scottish Golf Awards at the Hilton Glasgow,” said Lyle, 55. “What an honour it was to receive a Lifetime Achievement Award in front of Scotland’s golf fans in Glasgow, so close to my family heritage in Milngavie.

It was also wonderful to have my wife, Jolande, and four children present at the awards dinner. “It really doesn’t seem like 25 years ago that I won at Augusta National, but it’s obviously a memory that will live with me forever. “I’ve been lucky to have enjoyed a great career and it was nice to reflect on it in Glasgow.

Well done to all the award winners and thank you to the Scottish Golf Union and the Scottish Ladies’ Golfing Association for organising a fantastic occasion.” During a night to celebrate Scottish golf at all levels after a fantastic 12 months at amateur and professional level, Lyle was reacquainted with the Claret Jug and the Ryder Cup – among six trophies on show for dinner guests during a wonderful evening which raised thousands of pounds for junior golf in Scotland. Lyle also presented Alford’s Laura Murray with the SLGA Ladies Order of Merit award, before accepting his own Lifetime Achievement accolade from another icon of the 1980s, the Scotland football manager Gordon Strachan.

Other famous personalities from across Scottish sport who gathered included Stephen Gallacher, the recent winner of the Omega Dubai Desert Classic, who presented the Amateur Golfer of the Year award to Jack McDonald of Kilmarnock (Barassie). Gallacher walked away with the Shot of the Year award after his heroics in Dubai, while Ryder Cup hero Paul Lawrie won the prestigious Player of the Year award. Craig Brown, manager of Lawrie’s beloved Aberdeen, received the award on his behalf, with other sports celebrities in attendance including golfer Alastair Forsyth, Scotland’s curling queen Eve Muirhead and Grand Slam winning rugby hero Tony Stanger.

Among other awards presented on the night, Scotland’s victorious Men’s Home Internationals team won the fierce fight for Team of the Year, while Bradley Neil accepted the Boys’ Order of Merit title on behalf of his Team GB gold medal-winning team-mate Ewan Scott from St Andrews. The awards also recognised the efforts of those involved at the grass roots level of the game, with the RBS Volunteer of the Year award going to Shirley Murray from Torvean, while Central region club Strathendrick triumphed in the RBS Junior Club of the Year.

Another St Andrews player, Lauren Whyte, the 2012 Scottish Girls champion, was also the second recipient of The Adam Hunter Award, created following the death in 2011 of the ex-European Tour player and coach. Stephen McAllister, a former close tour colleague of Hunter’s, was appropriately on hand to accept Whyte’s £500 grant towards her coaching and development.

Meanwhile, proceeds from the Jewson Long Putt Challenge went to Lyle’s nominated charity – The Brain Tumour Charity. On the day of Bandanas for Brain Tumours, Sandy and dinner guests donned bandanas for the second biggest Brain Research Charity in the world focussing on research.

The full list of winners from the 2013 Scottish Golf Awards reads below: