Sorry -- No Golf News at the moment - So how about "Come Dancing for Doggies" -- With Gin the Border Collie!!

SGUpdate Magazine
The latest copy of the SGUpdate magazine is now available to download from our website or pick up from your golf club. The new look edition features a review of the 2008 season including Scotland's fantastic win at the World Amateur Team Championships, an interview with national junior coach Spencer Henderson on the progress of the Scottish Golf Academy and all the latest news on our range of services for clubs and members.
Click here to download your copy

Order your 2009 Scottish Golf Calendar
With the festive season just around the corner, the Scottish Golf Union have the ideal stocking filler for all golfers with our 2009 desktop calendar now on sale for just £5.00, including P&P. To order your copy, click on the order form below or call us on 01334 466477 to pay by credit or debit card.

We have teamed up with the Fairmont St Andrews to offer a fantastic four-ball deal at the recently opened Kittocks Course to play between November and March for just £99.

With SGU Golf Central now fully integrated into scottishgolf.org, clubs across Scotland have been busy updating their visitor golf packages, membership vacancies and open competitions for the 2009 season. There are now hundreds of open competitions listed and with many of these great days out filling up quickly, now is the time to download your entry forms and get your playing schedule planned.

We have also added a great new feature of 'Open Competitions of the Week' so you can easily pick out some of the best events on offer in Scotland.

Congratulations to Tulliallan golfer Callum Macaulay who has successfully qualified for the 2009 European Tour and the lucrative 'Race to Dubai'. After a glittering amateur career, we wish Callum every success among the paid ranks and all Scottish golf fans will be watching his progress.

Thank your for continued support of the Scottish Golf Union.

Email ThisBlogThis!Share to TwitterShare to FacebookShare to Pinterest
Labels: Advertise on this site, Open Days, SGU

You may have helped Emma Wilson from Kirkcaldy raise money for Breakthrough Breast Cancer. To read all about it go to West Vets Website
Posted by Carol

Irvine (Bogside) who were scheduled to host the British ladies Strokeplay Championship from 19 - 21 August 2008 have agreed to a venue switch with Royal Aberdeen.
Royal Aberdeen were due to host the Ladies Home Internationals from 9 - 11 September 2009 but a clash with a major oil industry conference has led to little or no accommodation being available that week in the northern city.
With the agreement of both clubs, Royal Aberdeen will now host the British Strokeplay event whilst The Home Internationals will no be played at Irvine (Bogside) from 9 - 11 September next year
Posted by Carol 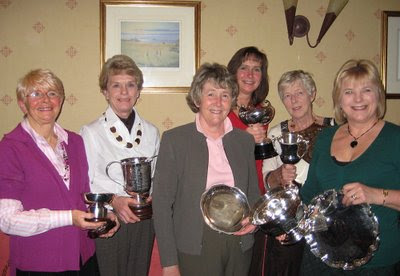 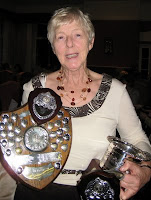 The Douglas Park annual Club Prizegiving took place this afternoon. Pictured above are some of the main trophy winners.

Vice Captain Gladys Speedie was one of the biggest winners with a load of cups -- The Senior Championship, the Jubilee Cup and the Mixed Foursomes Winner.

You might have noticed that the search box in the title bar has not been working for a while... well... GILLIAN KIRKWOOD has finally fixed it.... so you should be able to search Kirkwoodgolf for that elusive pieces of news in the archives.

Get some Titleist Balls for Christmas 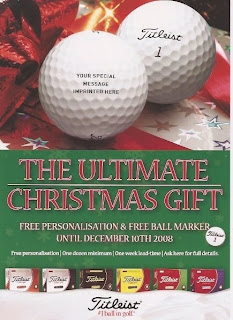 As the Festive season approaches I thought you might be interested in the attached logo ball offer that Titleist are running for a short period.


You can order 1 doz of any of the attached Titleist balls and have any message printed on them, up to the 3 lines with 17 characters in each line, for no additional cost.


A neat idea for Christmas for any golfer!
Of course we also have our new range of winter clothing in stock now and I look forward to seeing you in the shop over the winter months. (Click on the Picture to see more)

The 2nd Hacienda del Alamo February Festival is being endorsed by the Ladies Golf Union.
The entry form for the four events over six days programme - Thursday, February 12 to Tuesday, February 17 - are being highlighted on the LGU website.
Fraser Munro, the LGU's Championship Manager, who visited the resort earlier this year and was highly impressed with the resort's facilities, says: "I was really impressed by the course and the quality of the practice facilities. For me there would be no better way to prepare for the new season than by spending a week or two at Hacienda de Alamo."
One important change for the 2009 Festival is that we have opened up the Saturday-Sunday events to allow MALES to enter the St Valentine's Day pro-am and the Costa Calida Pairs.
This is to encourage competitors to be accompanied by their husbands, partners or boyfriends, who will be able to share in the weekend action.
The two main events - the 36-hole Murcia Ladies Open (Thursday-Friday) and the 36-hole Hacienda Ladies Open (Monday-Tuesday) remain ladies/girls only.
Every competitor, whether they are playing in all four events or just one, is entitled to a free practice round over the Dave Thomas-designed championship course, which this week is hosting the Scottish Senior Golfing Society's Spanish Festival (switch over to http://www.scottishgolfview.com/ to see daily reports).
There is NO minimum or maximum age limit. All we ask is that the players have a handicap of 20 or less when they are competing in the Festival.
Any queries or you want an entry form E-mailed direct to you? E-mail Tournament Controller Colin Farquharson at Colin@scottishgolfview.com
Posted by Carol 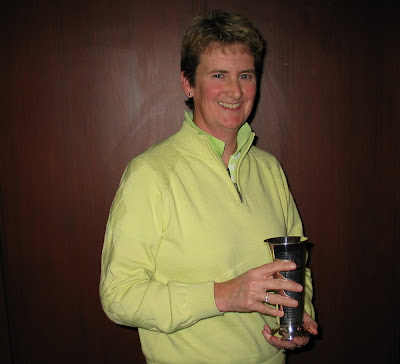 The 2008 West Vets Champion May Hughes (Lanark) (pictured above)received her Trophy at the AGM and Prizegiving held at Cowglen Golf Club yesterday afternoon. Helen Faulds (Douglas Park) is the new Captain of the West Vets and Fiona Roger (Ranfurly Castle) is the new Vice Captain.
To read all about the AGM and see more photographs go to West Vets Website
Posted by Carol 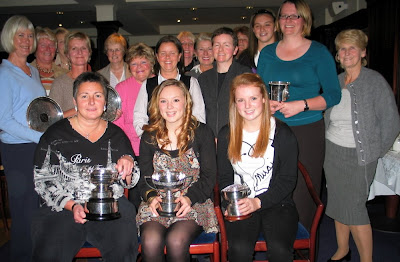 The Renfrewshire Ladies County AGM and prizegiving was held at Haggs Castle Golf Club yesterday. To read all about it and see some photographs go to Renfrewshire County Website
Posted by Carol

The Board of the Scottish Ladies’ Golfing Association is pleased to nominate Miss Shona Malcolm C.A. as Chairman of the Association for the three years from January 2009. The term of office of the current Chairman, Mrs Pat Wilson, expires at the Annual General Meeting in January 2009.

Currently Chairman of the SLGA’s Business Development Group and the “One Plan for Golf” steering group, and a Board member of clubgolf, the national junior golf initiative in Scotland, Shona will bring a wealth of golf knowledge and experience to the role of Chairman.

A Chartered Accountant by profession, Shona is currently working with the Ladies’ Golf Union to deliver the LGU’s Business Plan.

A native of Prestwick, the venue of the first Open Championship in 1860, Shona became involved in golf administration in the early eighties and served as Treasurer of the SLGA from 1996-2001, before taking on the role of Councillor on the Ladies’ Golf Union in 2007. She is a member of both Prestwick St. Nicholas and Prestwick St. Cuthbert Golf Clubs, and was Lady Captain of the latter in its Centenary Year, 1999.

The appointment of a Chairman for three years marks an important stage in the SLGA’s development which has, in recent years, seen the Association take on responsibility for handicapping, course rating and the running in Scotland of the former LGU medals, as well as the implementation of a change in business model from being an unincorporated association to a company limited by guarantee.
Pat Wilson, the present Chairman, says
“I am delighted that Shona is to become our new three year Chairman bringing continuity to the role. Shona brings, not only tremendous experience of golfing administration having been Treasurer of the SLGA and an LGU Councillor, but also vast business knowledge from her professional role as a C.A.”

“I am very pleased to have been nominated as Chairman of the SLGA at these exciting and challenging times for ladies’ golf. The SLGA has a responsibility to protect and promote the interests of ladies’ golf in Scotland, celebrating the golfing legacies and traditions while encouraging more people to take up the sport.

I genuinely believe that golf should be accessible to anyone, of either gender, who wants to play, and look forward to working in partnership under “One Plan for Golf” with our colleagues at the Scottish Golf Union and the PGA to achieve this goal.

I look forward to contributing to the ongoing modernisation initiatives, and to meeting and consulting with many of the SLGA’s members in the coming months and years.”
Posted by Carol

Golf is not escaping the Credit Crunch ... Lyle Anderson has had to put Loch Lomond Golf Club and course on the market. See the full story by going to the Scottish Golf View Website
Posted by Carol

The 2009 West of Scotland Championship will return to Prestwick

The 2009 West Of Scotland Ladies' Strokeplay Championship is scheduled to be held at Prestwick Golf Club on Sunday 3rd May.
This will be the third occasion in recent years that the championship has been contested over the Prestwick links, the last occasion being in 1997 when former Ayrshire ladies Champion and Prestwick resident Catherine Malcolm (Prestwick St. Cuthbert) took the title
Posted by Carol

£723 raised for MS at Douglas Park

It contains a wealth of information regarding Golf Clubs, Driving Ranges and nearby accomodation should you be moving to a new area to live or planning a golfing holiday.

Golf Central is a web site/facility sponsored by the Scottish Golf Union.

It also gives valuable information concerning which Clubs are offering Open Competitions - in many cases you can apply online.
Click Here to be taken to the web site - refine your search criteria ie radius from Glasgow for example, type of Golf Club, Open Competition etc and you will receive comprehensive up-to-date data.