The Annual Greenlees Lunch and prize giving  took place on Tuesday 26th October, at East Renfrewshire Golf Club.  --  Click here for photographs and VideoThis was attended by 50 ladies representing the 20 Clubs from the 26 Clubs that that are in the 3 Greenlees Divisions.

East Renfrewshire's Greenlees Secretary Val Crawford and The Ladies Captain Carole Spy  welcomed the visitors to the clubhouse with a lovely glass of Prosecco.
Anne Judge (Ranfurly Castle) helped to collect in the Greenlees Fees.
The tables were named after  some of the East Renfrewshire Course Holes.

She then introduced the top table guests - Carole Spy , the Lady Captain of East Renfrewshire , who welcomed everyone on behalf of the Club and said
"It gives me great pleasure to be able to welcome you to East Renfrewshire  today for the annual Greenlees Lunch and Presentation of Prizes.

It is lovely to see so many familiar faces from matches or from the 80th Anniversary celebration which we hosted just a couple of months ago.

Today’s weather is certainly better for a lunch than playing golf.

East Ren will be celebrating our centenary next year and you will have noticed that preparations are well underway to freshen up the clubhouse. Apologies if you can detect the aroma of fresh paint, although on the upside it probably means you don’t have COVID!

Congratulation to the winning teams and I hope that everyone enjoys their lunch and catching up with friends old and new."

She then introduced Carol Fell and said "Carol - well known to us all who keeps her website up to date which includes the  Greenlees Results which are available for all to see."

Next introduction was that of  the hard working East Renfrewshire's Greenlees Secretary Val Crawford who has had 2 lunches to organise for the Greenlees Trophy this year with the other one being the very successful Anniversary TRI AM ---> CLICK HERE TO READ MORE IN THE WOMEN AND GOLF MAGAZINE --
Val Crawford then said grace before everyone enjoyed a fantastic buffet lunch which everyone enjoyed.
After the lunch the presentation of trophies took place -- 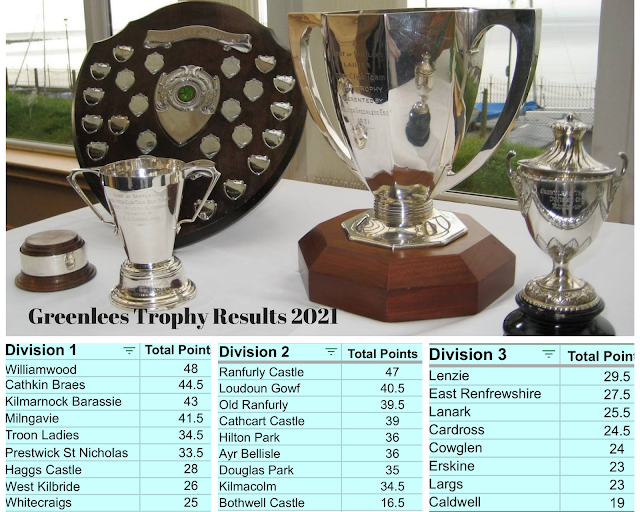 Winners of the Greenlees trophy -- Williamwood Golf Club
Runners up - Cathkin Braes
Demoted to Division 2  - West Kilbride and Whitecraigs
Winners of Division 2 - Ranfurly Castle
Runners Up - Loudoun Gowf
Demoted to Division 3 - Kilmacolm and Bothwell Castle
Winners of Division 3 - Lenzie
Runners Up - East Renfrewshire
Williamwood are the winners of the Greenlees Trophy for the first time in the history of their club and Julie Wilson collected  the Trophy and team mates Lorraine Morris, Gillian Crossley and Carol McNally joined in on the celebrations (pictured above)
The lunch and presentation of prizes finished with Maureen Mitchell thanking Dianne and her daughter Mel for the wonderful catering and feeding everyone so well.
She also thanked the Board of directors at East Renfrewshire for giving us permission use the clubhouse and also providing us with a welcoming drink.
Mr Ian Russell, Hilary and the office staff for all their support and to Carole Spy for presenting the prizes.
Finally she finished by saying the AGM would take place at Old Ranfurly on Tuesday 16th November at 10:30am for 11am and thanked everyone for coming wished everyone a safe journey home.
CLICK HERE FOR MORE PHOTOS
CLICK HERE FOR VIDEO OF PRESENTATION OF TROPHIES (Apologies to Barbara Aird of Cathkin Braes for missing video of her speech - Carol Fell)
Posted by Carol

The 111th. Renfrewshire Ladies' County Golf Association AGM and Prize-Giving will take place on Wednesday 3rd November at 7.30pm at Haggs Castle Golf Club
The Agenda and more information can be found by --  Going to the RLCGA Website or the interim Scottish Golf Website  which can be accessed on your SG App.

Huge congratulations to Isla Moncrieff (Aberfeldy) who won the Perth & Kinross Ladies' Champion of Champions at Pitlochry Golf Club, yesterday (Sunday 17 October).
Isla Moncrieff (Aberfeldy) shot a six-over-par scratch score of 78 over the Pitlochry Course to win the title by 2 shots. The runner-up was Carol Muir (Craigie Hill) who shot 80.
This tops off a great season for Isla, who plays off a handicap of 3. Not only did she win the Aberfeldy Ladies' Club Championship this year, but she was also a member of the Perth & Kinross Ladies' County team that won the 2021 Scottish Women's County Finals at Forres.
The Leading Scores were:
Isla Moncrieff - Aberfeldy Ladies' Club Champion 78
Carol Muir - Craigie Hill Ladies' Club Champion 80
Gwen Munro - Dunkeld & Birnam Ladies' Club Champion 83
Course: Pitlochry - Par 72, Course Rating 70.2, Slope Rating 127
Thanks go to Jane Yellowlees (P&KLCGA Hon. Secretary) for the report from the P&K Website and for the photograph
Posted by Carol


A Presentation Day took place at at Clober Golf Club yesterday (Sunday 17th October ) for all medal winners and trophies for the season which included a presentation gift to May Myers,.
Former D&A County Team Player -- She is the  longest playing member at Clober aged 14 and  in her 58th year, won the championship 23 times 👏👏⛳️❤️ -- Many congrats May

Email ThisBlogThis!Share to TwitterShare to FacebookShare to Pinterest
Labels: Clober

Many congratulations go to Williamwood Golf Club who have won the 2021 Greenlees Trophy.

The Annual Lunch and Presentation of Prizes this year will be held at East Renfrewshire Golf Club on Tuesday, 26th October at 12:30 pm for 1pm.