KYLIE WALKER TELLS OF LIFE ON THE EUROPEAN TOUR 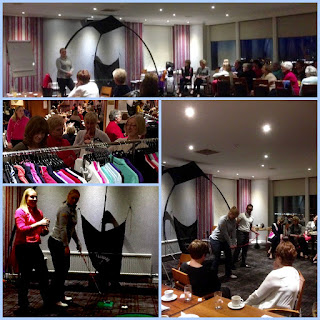 Mishan Aubeeluck who is a Performance Enhancement Specialist Personal Trainer demonstrated many exercises that are relevant to golf with flexibility being a key attribute to the golf swing.

Clothes from Glenmuir, Under Armour & Ivanhoe latest clothing samples along with Ping and Callaway demo clubs were all there to everyone to view, buy or order.

Clare-Marie Macaulay gave some coaching tips on the night on how you can lower your scores this season.

The prize draw for a lesson with Clare-Marie was won by D&A Captain Karen Maxwell.
Karen was thrilled to win and Kylie -- a past D&A County Champion and D&A'S Lynn McColl joined the celebration by giving her the thumbs up !!
Posted by Carol

Kilmacolm Golf Club who is celebrating their 125th Anniversary this year held their Ladies Social evening on Tuesday (22nd March) with Captain Susan Reid inviting some Past Curtis Cup players to join them.
Susan introduced Angela Bonallack, Eilidh Briggs, Julie Otto, Mo Richmond and Belle Robertson to all that attended. She gave some history of the Curtis Cup and then questions from the audience were answered by the players - with many amusing stories and tales.
The evening finished with an excellent supper enjoyed by all with the players joining to chat and mix with everyone around the room.  - A lovely evening was had by all

The Curtis Cup Match is contested every two years by teams of female amateurs representing Great Britain & Ireland and the United States. It is organised by the United States Golf Association and Ladies Golf Union, who select the respective teams of eight golfers. The Curtis Cup was first played in 1932, and is named after sisters Harriot and Margaret Curtis, who won four victories in the U.S. Women's Amateur. The Curtis sisters donated the trophy for the competition.The Curtis sisters had competed in the 1905 British Ladies Amateur at Royal Cromer Golf Club, where an informal match had occurred between teams of American and British golfers, and they wanted to promote the international friendships in the world of women's golf. The cup is inscribed, "To stimulate friendly rivalry among the women golfers of many lands."

BELLE ROBERTSON O.B.E.
Belle started playing golf at Dunaverty GC at age 15.  Played in the Curtis Cup in 1960, 1966, 1968, 1970, 1972, 1982, 1986 and was the non-playing Captain of GB & Ireland in 1974 and 1976. She won the British Ladies Amateur title in 1981 plus winning the Scottish Amateur title on seven occasions. Received O.B.E for services to golf. Voted "Scottish Sportswoman of the Year" four times; voted "Women Golfer of the Year" three times; inducted into the Scottish Sports Hall of Fame in 2002.  She also became one of the first female members of the Royal and Ancient Golf Club of St Andrews in February 2015.

Maureen began her golfing career here as a junior and she is now an Honorary Member of Kilmacolm.  She played in the Scottish Junior Team for 5 years; was the Scottish Girls Champion 1970, 1971, 1973; the British Girls Champion 1972.  Played in the 1974 Curtis Cup in San Francisco, which Belle Robertson captained!  She also played in the Vagliano Trophy in 1975 (UK & Ireland v Continental Europe) and was selected for the World Team in 1976.  Maureen is now a GP based in the Wirral, and now plays in the British Senior Women’s’ Golf Amateur competitions as well as in the Seniors in Spain (along with Barbara Biggart who is a former Kilmacolm member as well!)
LADY ANGELA BONALLACK

JULIE OTTO
Julie was brought up in Felixstowe where she was introduced to golf at the age of 11.  At age 19, she was selected to represent England in the European Lady Junior Team Championships in Germany.    Played in the Curtis Cup teams of 1988, 1990, 1992, 1994, 1996. She retired from international amateur golf after the 1996 Curtis Cup as the reigning British Amateur Champion and moved into golf administration becoming Assistant Director – Rules at the R & A.  In 2015, Julie became an Attached PGA Professional at the Fairmont St Andrews and she is also a PGA Teaching Professional at Elie Sports Club in Fife.

EILIDH BRIGGS
Eilidh began playing golf at age 6; got her first handicap at age 9.  She has been the Renfrewshire Ladies County Champion three times; Scottish Girls Champion 2011; Scottish Champion of Champions 2011 & 2012. She played foursomes with her sister Megan, when Eilidh won her first ladies cap at Hillside Golf Club in the Ladies Home International matches in 2011. Eilidh first represented Scotland at the European Young Masters in 2008, returning to the competition in 2015 as the Team Captain. She played in the Curtis Cup in 2014 in St Louis, USA.

All these golfers have won numerous other Championships during their golfing careers – too many to list!

With the golf season just around the corner, we have a fun filled evening to kick start your season. The evening is for Ladies who already play or who are thinking of taking up the game.

We will be joined on the evening by Ladies European Tour Player - Kylie Walker, who will give us an insight into life on tour and what it takes to be a winner on Tour.

Mishan Aubeeluck who is a Performance Enhancement Specialist Personal Trainer will be educating us on golf specific exercises. Mishan is also a Pilates instructor which is very relevant to golf with flexibility being a key attribute to the golf swing.

If you are looking to upgrade your equipment or wardrobe this season we will have Glenmuir, Under Armour & Ivanhoe latest clothing samples along with Ping and Callaway demo clubs to try.

Clare-Marie Macaulay will be giving coaching tips on the night on how you can lower your scores this season. Everyone who attends the night will also be out into a prize draw to win a lesson with Clare-Marie.

Why not bring your friends along and enjoy a ladies night out, pick up some golf tips and have a look at the latest clothing available for 2016.

The cost of the evening is £3 per person, which includes a drink and light refreshment.

To book your place please phone Paisley Pro Shop on 0141 884 4114 or email Clare-Marie at cmmacaulay@hotmail.co.uk
Posted by Carol

Email ThisBlogThis!Share to TwitterShare to FacebookShare to Pinterest
Labels: Advertise on this site, Paisley

The West of Scotland Championship is at Bonnyton on May 1st, hosted by Renfrewshire County this year so please spread the word to those with handicaps of 15 and below. Let's have as many entrants as possible this year 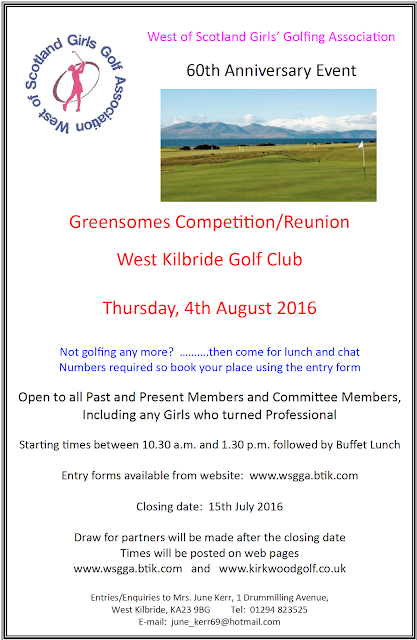 CLICK HERE TO PRINT OUT THE POSTER
Posted by Carol