RENFREWSHIRE PIPPED BY ANGUS IN THE COUNTY FINALS AT HILTON PARK

Angus have won the Scottish women's county championship for a second time in three years.
The North Division champions beat Borders, East Lothian and Renfrewshire at Hilton Park Golf Club, Glasgow to win the title with a 100 per cent record.
Angus's last match was the hardest of the three.
They beat Renfrewshire 5-4, coming back from a 2-1 foursomes deficit to take the singles 4-2 for the match and the title.
Winners for Angus in the singles were Gillian Montieth, Claire Robertson, Jacqueline Sneddon and Ailsa Summers.
The other team members who played their part over the three days were county champion Ann Ramsay, Jackie Brown, Claire Penman and Jemma Chalmers.
East Lothian, hammered 8-1 by Angus on Saturday, completed an unhappy weekend when they lost 5-4 to Borders. South Division champions do not win many matches at the County Finals but they put 2pt on their scoreboard by taking the foursomes 2-1 and then sharing the singles 3-3 with East Lothian.
So Angus topped the table with 6pt out of six. Renfrewshire were runners-up with 3pt (one win, one draw). Borders were third with 2pt (one win) and East Lothian were fourth with 1pt (halved match with Renfrewshire on Day 1).
DAY 3 RESULTS
ANGUS 5, RENFREWSHIRE 4
Foursomes: 1-2
A Ramsay and G Montieth lost to K Milne and G Kyle 2 and 1.
J Brown and J Sneddon beat D Jackson and L Stewart 5 and 4.
A Summers and C Penman lost to M Briggs and C Whyte 1 hole.
Singles: 4-2
Ramsay lost to Briggs 3 and 1.
Montieth beat Jackson 6 and 5.
C Robertson beat Milne 2 and 1.
Brown lost to Whyte 3 and 2.
Sneddon beat Kyle 4 and 3
Summers beat Stewart 4 and 3

ANGUS LOOK SET TO RETAIN SCOTTISH WOMEN'S COUNTY CHAMPIONSHIP AND ONLY RENFREWSHIRE CAN STOP THEM.

Angus, the 2012 champions, look set to win the Scottish women's county golf championship title for the second time in three years. Only Renfrewshire can stop them
The North Division champions followed up a first-day win over Borders by trouncing East Lothian 8-1 at Hilton Park Golf Club, Glasgow today.
Angus complete their programme by playing Renfrewshire who scored their first win by beating Borders 6 1/2-31/2 after drawing with East Lothian on Day 1.
Angus made a clean sweep of the foursomes against East Lothian and then won five of the six singles through champion Ann Ramsay, Gillian Montieth, Claire Robertson, Jacqueline Sneddon and Ailsa Summers.
Renfrewshire won the foursomes 2-1 against Borders then had singles winners in Megan Briggs, who dashed back to Scotland after playing for Scotland in the Women's Home Internationals at Aberdovey, finishing on Friday, Carol Whyte, Katrina Milne and Liz Stewart.
Denise Cowan making her debut in the team managed to half her match.
DAY 2
ANGUS 8, EAST LOTHIAN 1
Foursomes: 3-0
A Ramsay and G Montieth beat J Herd and C Munro 5 and 3.
J Brown and J Sneddon beat L Johnston and D Young 6 and 4.
A Summers and C Penman beat M-L Watkins and K Ward 4 and 3.
Singles: 5-1
Ramsay beat L Dunn-Butler 3 and 2.
Montieth beat Ward 7 and 5.
J Cahlmers lost to J Free 4 and 3.
C Robertson beat Johnston 4 and 2.
Sneddon beat J Herd 8 and 6.
Summers beat Watkins 4 and 3. 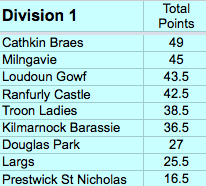 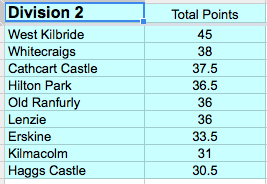 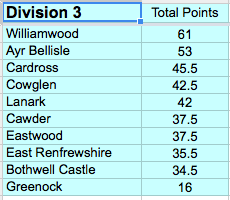 Email ThisBlogThis!Share to TwitterShare to FacebookShare to Pinterest
Labels: Greenlees 2014, Greenlees News (All)

Angus, the only team to win on the opening day of the Scottish women's county championship finals at Hilton Park Golf Club, sit on top of table, ahead of East Lothians and Renfrewshire who drew 4 1/2-4 1/2, and Borders whom they beat 6 1/2-2 1/2
On Day 2 it is Borders v Renfrewshire and Angus v East Lothian.
Angus made a flying start to the three-day programme by making a 3-0 clean sweep of the foursomes against Borders.
Borders made a better fight of it in the singles, with Daniele Ker beating Angus county champion Ann Ramsay 5 and 4 in the top tie.
Borders got a further 1 1/2pt from three halved matches but Angus got the clinching wins from Ailsa Summers and Jackie Brown.
East Lothian went in for lunch with a 2-1 lead over Renfrewshire but they could not maintain that advantage through the singles session although they won the top two ties through Mary-Lou Watkins and Keren Ward.
Renfrewshire's tailed wagged furiously with wins by Gillan Kyle, Denise Cowan and Liz Stewart.

WEST OF SCOTLAND'S LESLEY LLOYD DOES WELL IN HER SENIORS DEBUT

Cheshire's Catherine Rawthore (Sale) is the new Senior British Women's Open Amateur Stroke-play champion. She won the title by two shots over the testing Royal Dornoch links with a great aggregate of one-under-par 227. The ladies par was 228 (3x76)
Catherine had rounds of 77, 76 and 74.
Local lady Mary Smith (Tain), was runner-up on 229 with scores of 77, 75 and 77.
And another Scot, Sheena Wood (Aberdeen Ladies) did well to tie for third place on 230 with scores of 80, 73 and 77. On the same mark were Spain's Macarena Campomanes (78-80-72) and Lulu Houseman (Highgate) 78, 77 and 75.
Campomanes' final round was the lowest score of the three-day tournament.
Leicestershire's Helen Lowe (Scraptoft), clear leader through the first two rounds with scores of 71 and 74, had a disastrous final day of 11-over-par 87 for 232 and finished joint sixth..
Defending champion Ann Lewis from Wales finished on 234 with scores of 75, 77 and 82. Also on the 234 mark was Royal Dornoch player Alison Battlett (81-79-74), the Northern Counties LGA secretary.

The British Seniors Amateur Championship is being played at Royal Dornoch this week and West of Scotland Seniors Alex Glennie (Kilmarnock Barassie)  and Lesley Lloyd (Hayston) have both made the cut today after 2 rounds.
CLICK HERE for all the scores
Posted by Carol

Defending champions Wales, playing on home ground at Aberdovey, opened their Women's Home Internationals campaign with a 6 1/2-2 1/2 victory over Scotland.
The Scots, without Curtis Cup players Eilidh Briggs (injured) and Gemma Dryburgh (at college in America), did well to share the foursomes 1 1/2-1 1/2 but they were no match for the Welsh in the singles.
Wales won five out of the six. Scotland's only afternoon winner was Megan Briggs.
Ireland scored a rate 6-3 win over England in the other match.
Details:
WALES 6 1/2, SCOTLAND 2 1/2
Foursomes (1 1/2-1 1/2):
C Williams and B Harries beat G Macdonald and M Briggs 6 and 5.
L Hillier and J Ryan lost to L Macgregor and K McIntosh 3 and 2.
S Birks and J Evans halved with T Mactaggart and H McCook.
Singles (5-1)
Williams beat Macdonald 2 and 1.
Harries beat McCook 5 and 3.
R Lewis beat McIntosh 4 and 2.
Birks beat Macgregor 7 and 6.
Hillier beat Mactaggart 3 and 2.
Evans lost to M Briggs 6 and 4.

Thanks go to Colin Farquharson for the report
Posted by Carol 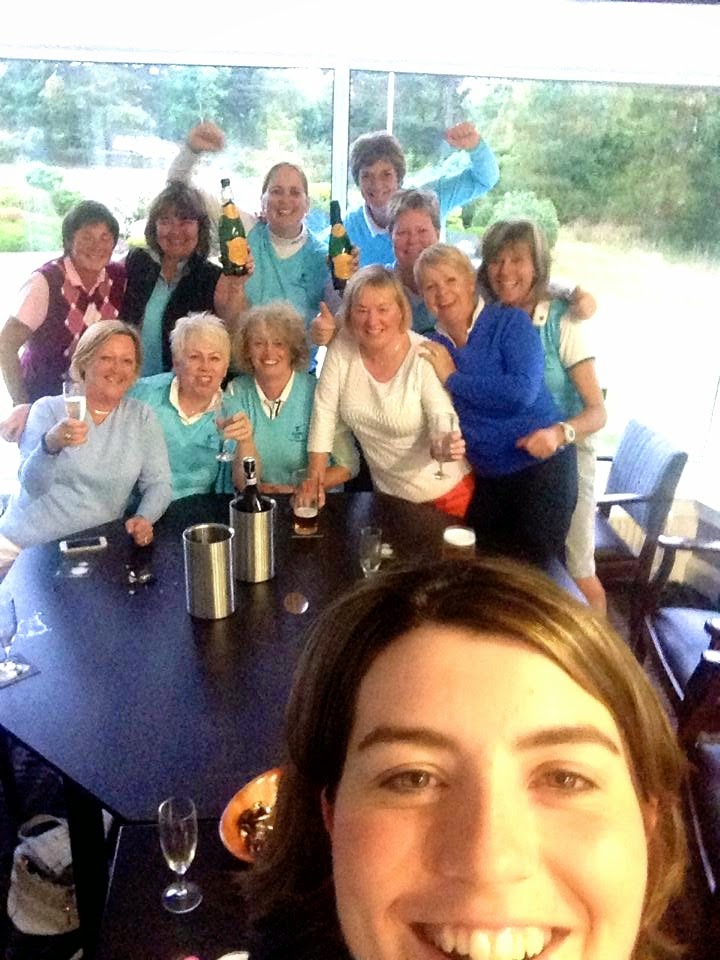 Many congratulations go to Cathkin Braes who beat Troon Ladies today at Troon to lift the Greenlees Trophy  -- Thanks go to Jenny Potter for the "Selfie Photo"
Full reports of all divisions will follow when matches are completed.
Posted by Carol

Scotland lost 4-1 to Spain in their concluding match of the rain-hit European senior women's amateur team golf championship near Salzburg in Austria.

Because the course was waterlogged until Thursday, only one qualifying round was possible and only four teams qualified for the championship flight.

The Scots finished second in Flight B and were ranked sixth overall.

England beat France 3 1/2-1 1/2 in the Flight A final. Ireland were ranked third after finishing with a 4-1 win over Sweden.

Ideal conditions greeted the 48 couples from 14 different Counties who were competing at Ladybank Golf Club on Wednesday 3 September in the final of the Commonwealth Spoons.
It was new Scottish cap Louise MacGregor and her partner Tricia Chillas (Stirling & Clackmannanshire) that took this years title with a nett 72. In second place was Louisa McCarney & Rena Carnavan (Lanarkshire) with a nett 74 and in 3rd place were Linda Hay & Fiona Bennett (Renfrewshire) with a nett 74.5.

For all the scores please click the link below.
All Scores
Posted by Carol

RAIN IN JAPAN AND AUSTRIA

Rained all night and all morning too.
Managed to hit some balls at the range and then walked the course (see photo!!)
Play has already been abandoned for tomorrow too as the course simply isn't playable. So we are down to one round of Strokeplay on Wednesday then on to match play on Thursday as was planned. Supposed to dry up and warm up - very soon we hope!
Anna Telfer

The World Ladies Team Championships are being played in Japan are also under deluge of rain. Playing for Scotland are Eilidh Briggs (Kilmacolm), Gemma Dryburgh (Beaconsfield) and