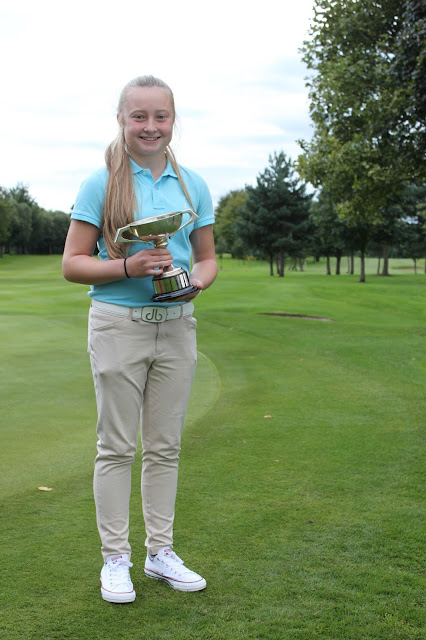 The Haggs Castle Finals Day was yesterday - Sunday 30th August .  Some dryish weather which is a bit of a surprise given the weather we have suffered this year.


Laura started well and was two up at the turn. Jennifer started to chip away at this lead and with wins at the 10th, 13th & 14th took the lead. Holes were then halved with Jennifer missing a putt on 17 to close out the match but leaving her 1 up going down 18. Jennifer secured a good 5 on 18 to win two up.

She is the youngest ever Ladies Champion at Haggs Castle.

Thanks go to Neal Stewart for the report
Posted by Carol

MIXED OPEN GREENSOMES - GLEDDOCH GOLF CLUB (Sun 23rd August)
This event was held in honour of 3 Lady Past Captains (all acting members at the time
of their passing), Sheila Hughes, Kay Kellard and most recently Lynn Mitchell.

Despite an incredible amount of rain in the early hours of Sunday, the greens held up
well and the scenery was at its best. 47 couples took part and apart from the entry
fees, a large amount of money was given through sponsorship, other donations, silent
auction bids and a raffle.

Our 2 main sponsors were Windowcare Scotland and Thermo Fisher Scientific. In the next few days, we will be giving the Beatson Cancer Charity a total of £3,566 - an amount we are incredibly proud of.

The atmosphere was wonderful at the Prize Giving, especially as club member Isabell Donnelly had a hole-in-one at the 12th !! 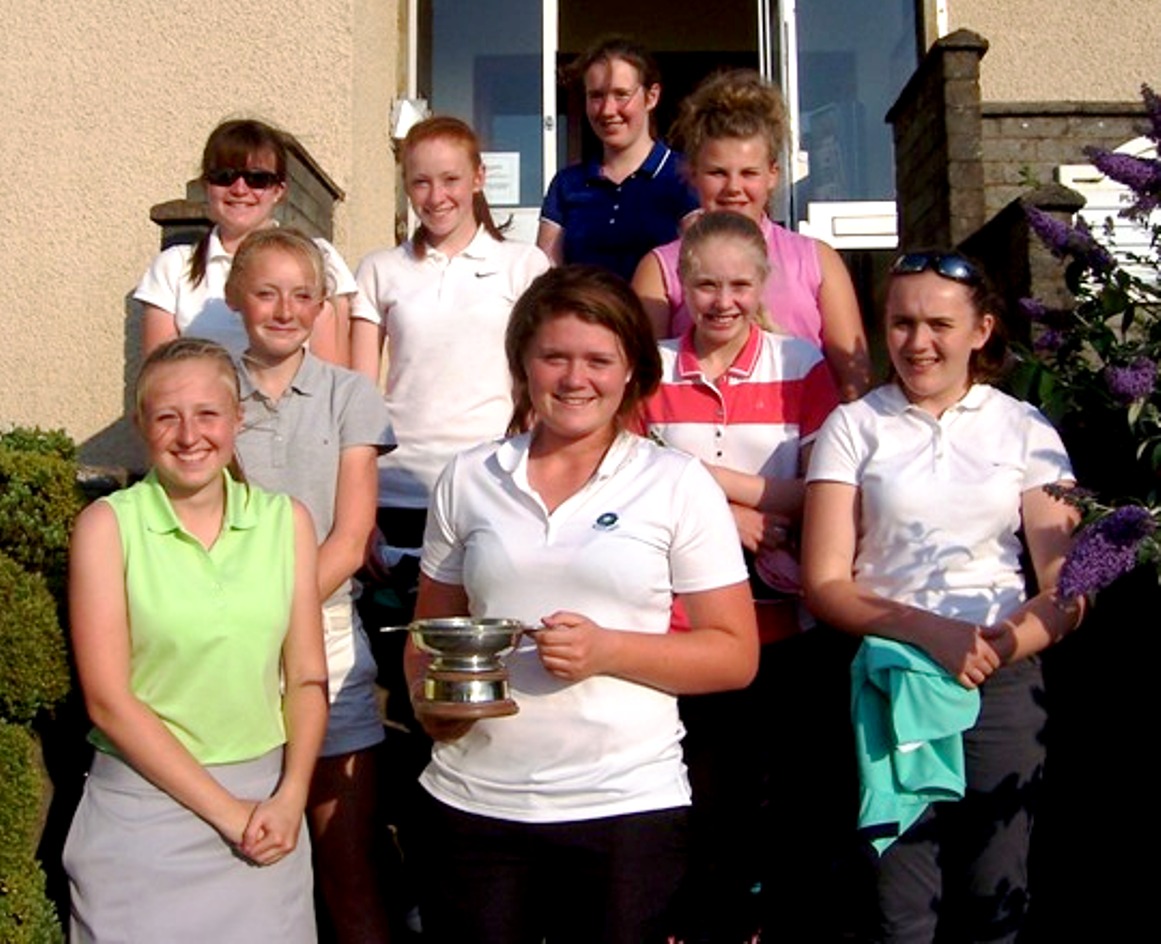 Emma Hale (Troon Ladies), in her last year as a junior, won the scratch and handicap prizes yesterday at Beith in Ayrshire's Junior Girls' competition.
Playing in exceptionally strong winds over Beith's hilly parkland course, Emma's scratch 70, net 69 was an excellent round of golf. Her 69 won the St. Nicholas Trophy by 2 strokes over Jennifer Howie (Largs). As the best scratch, Emma wins the qualifier for the Telegraph Junior Golf Championship. SSS 69, CSS 70
Thanks go to June Kerr for the report
Posted by Carol

ELEANOR CANNON IS THE NEW CHAIRMAN OF SCOTTISH GOLF LIMITED

NEWS RELEASE
Eleanor Cannon, a highly qualified director with an engrained passion for golf, heralds a fresh start for the sport after her appointment as the inaugural Chair of Scottish Golf Limited.

Following the historic decision to amalgamate the Scottish Golf Union (SGU) and Scottish Ladies' Golfing Association (SLGA) into a single governing body for amateur golf in Scotland from 1 October, Eleanor will use her extensive strategic and commercial background to lead the new organisation in the non-executive Chair role for an initial three year term.

Succeeding the current Chairs of both governing bodies, Tom Craig (SGU) and Beth Paterson (SLGA), Eleanor, 50, will seek to lead the ongoing development of golf in Scotland and meet the challenges the sport faces.
With a very impressive CV, Eleanor offers considerable board experience within public and private companies, and has inspired and implemented change in challenging commercial and cultural environments.
After graduating from the University of St Andrews, Eleanor started her career with Marks and Spencer PLC, before serving nine years at Tesco PLC where she became a General Manager and then Global Head of Customer Service.
She joined Scottish and Newcastle PLC in 1997 and held various Board positions during a nine-year spell, latterly as Group HR and Corporate Affairs Director. Since 2008, she has run an Executive Coaching business that specialises in enabling Chief Executives and Managing Directors deliver change within their organisations.
Eleanor, who has also held Trustee and Director positions in five charities over the past 18 years, also has a strong golf background and pedigree, with her mother, Netta Matthew, and father, Rennie Matthew, past Ladies and Club Captains at Ralston Golf Club and her father going on to become President of Glasgow Golf Union.
A former Girls champion at Ralston, Eleanor has been a member at various clubs wherever her work has taken her geographically in Scotland and is currently a member at Ranfurly Castle Golf Club in Renfrewshire.
In a joint statement, Tom and Beth said: “We are delighted that Eleanor has accepted the position of Chair of Scottish Golf Limited.
“She was the stand out candidate amongst a high quality pool of applicants for the role. Eleanor is a very experienced and talented individual. The new unified governing body for Scottish amateur golf offers huge opportunities going forward. We are confident that Eleanor is the person to lead the body into a new and exciting era for golf in Scotland.”
Eleanor said: “I’m enormously proud to have been appointed as the new Chair of Scottish Golf Limited and look forward to this exciting opportunity.
“It’s a position of great responsibility and I’m determined to help meet the many challenges the game faces in Scotland, including providing greater support to our clubs and players and projecting golf as a modern, inclusive sport with a positive image to attract more players.
“I’m a proud and passionate golfer, proud of golf’s role in the history of sport in Scotland and passionate about the values and disciplines that it instils. I now look forward to the next three years with great optimism.”
The process to recruit a new Board of Directors for Scottish Golf Limited began in May, advertising as widely as possible for applicants for these vital roles through an independent HR consultancy.
The new Chair will now be involved in the process to fill the eight other non-executive director positions, with appointments to be announced in due course.
Posted by Carol

West Kilbride Girls' Open --   It's in the afternoon of Saturday, 22nd August.   Course as usual is in great condition despite the pretty grim weather this year.   Forms can be downloaded from the West Kilbride website --   CLICK HERE.   The closing date is 9th August so best for girls to be quick 'though I would expect they will accept entries a little bit beyond this date.   Trophies for scratch, handicap and pre-handicap.
Posted by Carol

The Ladies Championship was played over Greenock Golf course yesterday (Saturday 1st August) in atrocious weather conditions. The rain was so heavy at times that squeegees were required on some greens to disperse the puddles.
Linda McDougall was defending her title - and this year her opponent was Dorothy Fisher, a past champion and regular finalist. The final had a particular edge this year as Linda was going all out to beat the record of 17 championships set by the late Kathleen McNeill, a past president of Renfrewshire Ladies County Golf Association, the Ladies Golf Union and Scottish Ladies Golf Association.
Both players played excellent golf on a day which saw heavy showers and gale force winds test both their skills and their concentration. Linda took control early on and was two up after two holes - but Dorothy played some excellent golf and pulled this back to one at the fourth hole. This was the pattern of the match until the 11th hole when Linda went three up and won the next hole to put pressure on her opponent.
Both players halved the 13th in pars but Linda's par at the 14th was enough to secure her an 18th championship, beating Kathleen's previous record set in 1969.

To remind you of Kathleen McNeil's life story -- CLICK HERE