Kylie receives her award at the Scottish Golf Dinner 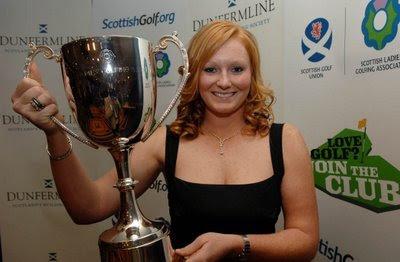 The Scottish Golf Dinner in Glasgow was held on Friday 27th March.
Kylie Walker (Buchanan Castle) and Kelsey MacDonald, won the ladies and girls Order of Merit titles respectively by impressive margins.
To read all about the dinner go to the Gillian Kirkwood Website

Photograph above, courtesy of www.idealimages.co.uk/
Posted by Carol

Ballochmyle Golf Club with support from East Ayrshire Council, clubgolf, and East Ayrshire’s Active Schools Department, will host and welcome all young people in the region to use this fantastic opportunity to discover if they have the drive to play golf during a special festival at Ballochmyle Golf Club, Mauchline, East Ayrshire on Monday 25th May 2009.
To read all about it go to the Gillian Kirkwood Website
Posted by Carol

Email ThisBlogThis!Share to TwitterShare to FacebookShare to Pinterest
Labels: Ballochmyle

John Beattie who was the guest speaker at the D&A Centenary Dinner talks to John Scott, Chief Executive of the Glasgow 2014 Commonwealth Games. 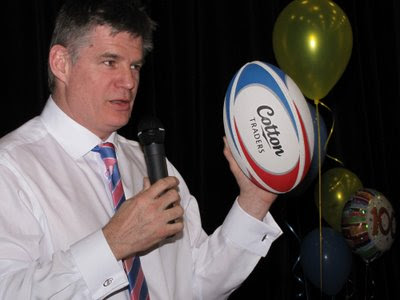 Dunbartonshire and Argyll Ladies County Golf Association held their Centenary Dinner on Monday 23rd March 2009 in the Milngavie Town Hall. Captain Kay McColl welcomed the 170 ladies to the evening with a champagne reception. Hon President Lesley Mackiggan gave the toast to the County. After an excellent meal the guest speaker John Beattie gave the audience some wonderful rugby coaching which included Belle Robertson, Kay McColl and President of the SLGA Ethel Jack involved in scrum practice !!
Laughter was the name of the game for that evening --- What a night!
To see some photos from the evening click on the small photo of John and Kay below.

Here is a short video of Past D&A Captain Helen Faulds trying out some long passes !!

Here are some 3 more wee snippets of video taken by D&A's Olive Mackay.The sound quality is a little poor but just adds to the flavour of the evening 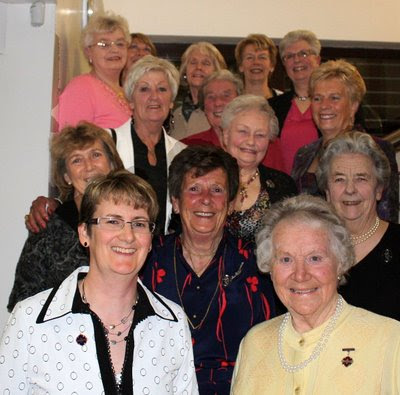 Captain May Hughes , Hon President Margo Bauer and Past Captains Mary McKay, Anne Prentice, Jean Cameron, Anne Burden, Isobel Kempsell, Jean Reid, Pat Hutton, Margaret Allan, Janice Paterson, Joyce Scott, Sheena Boyd and Elizabeth Nelson--- Click to enlarge (courtesy of Jean McIntyre)
The LLCGA Centenary Dinner , held in Kirkhill Golf Club last night proved to be most enjoyable for the 104 members who attended. The Centenary cake was cut by Honorary President, Margo Bauer. After Vice Captain Lesley Lloyd said grace a very tasty meal was enjoyed.
Captain May Hughes gave a most informative and amusing account of the History of LLCGA outlining the many successes of past and present members and teams.
To read all about it and see some photographs of the event go to the
Lanarkshire County Website
Posted by Carol

Mail On Sunday- 2nd Round Results

The 2009 Mail on Sunday is now underway. The only results I have at the moment are the 2nd round results Ranfurly Castle drew against Elderslie at Home by 2.5 - 2.5 Then (Up the extra holes) and the home team led by Anne Judge won at the 3rd extra hole.

Teams to represent Scotland at forthcoming events are:

The SGU is encouraging as many clubs as possible to get involved in Scottish Golf Awareness Week to attract more golfers into club membership.
For more info on how your club can take part, Click Here.

The national campaign, the first initiative of its kind launched by the Scottish Golf Union and Scottish Ladies’ Golfing Association, will commence the week following the US Masters and clubs across the country are being encouraged to get involved, although activity does not need to be restricted to that week alone.

The County Captains get into training on St Patricks Day !

Apologies to all the County Captains --- Kay, May,Nora and Christeen from your webmaster Carol--- she's the one in the middle !!
Posted by Carol

The 2009 Scottish Golf Show, one of the most anticipated Scottish consumer shows of the year, is now less than two weeks away and organisers are already expecting to break attendance records.

The event is being held at the SECC in Glasgow from March 20-22 and tourism chiefs VisitScotland expect the golfing extravaganza to be worth more than £1.25 million to the local economy.

The three-day showcase will feature some of the biggest names in the golf industry showcasing their latest equipment to Scottish golfers for the first time. Major brands in attendance will be Callaway Golf, TaylorMade, Nike Golf, Mizuno, Yonex, Wilson Staff and more.

Inside Glasgow’s SECC will be a 30 bay indoor driving range, 1000sq/m of practice areas including putting, short game and a special ‘kids only’ junior area. There will also be over 1000 free golf lessons by 14 of the country’s leading PGA professionals plus world famous trick shot artist Dave Edwards will perform his routine over the course of the three days.

Various competitions will be in place for long drive and nearest the pin and visitors will be able to interact with more than 100 exhibitors from the golf industry as the show sold out weeks in advance. Special equipment discounts will also be available from retail giants american golf, the Official Retail Partner of the Scottish Golf Show.

Visitors to the three-day show will have the chance to get up close and personal with one of the most famous trophies in world golf, the Eisenhower Trophy, which will be on location at the SECC following Scotland’s dramatic victory late last year in the World Amateur Team Championship.

Event Organiser Tom Lovering said: “We are very much looking forward to what looks set to be the biggest Scottish Golf Show to date – and it is fitting that we host it at the SECC, Scotland’s largest exhibition facility. This year’s show has grown in size with more retail space, more exhibitors, more driving bays and much more interaction for all levels of golfer.

“The Scottish Golf Show has firmly established itself as the perfect tee-off to the golf season and this year we fully expect to smash attendance records.”

Scottish golf is flying high through clubgolf. In the past year clubgolf has introduced more than two thirds of Scotland’s Primary 5 children to golf. Meanwhile, junior activity in Scotland’s golf clubs is booming with over 8,500 children developing their skills through clubgolf coaching.

Launched in 2003 following Scotland’s successful bid to host the 2014 Ryder Cup, clubgolf represents the Scottish Government’s commitment to create the opportunity for every nine year old in Scotland to play golf and enjoy the game for life.

In 2008, a year of remarkable growth, clubgolf achieved the following:

In 2009 the number of children taking part in clubgolf programmes at clubs and facilities is expected to rise to 10,000.

Hamish Grey, SGU Chief Executive Officer said, “clubgolf is an integral part of the SGU and SLGA’s structured coaching programmes and we are delighted to see it making such significant progress, enabling more youngsters than ever before to play the game.

“These latest figures show that Scottish Golf is achieving one of our key goals, that of ‘growing the game’. With the Ryder Cup at Gleneagles drawing ever closer now is the perfect time to increase participation and help our youngsters develop their talent. With the success of the programme and the wealth of opportunities now available for young golfers, clubgolf is already helping to create a legacy beyond 2014.”

Meanwhile this year the bar will rise higher for clubgolf’s introductory game in schools. With firstclubgolf set to be included in curriculum at more than three quarters of Scotland’s primary schools this year, clubgolf is targeting a further 38,000 new recruits to golf.

To read more go to the clubgolf website
Posted by Carol 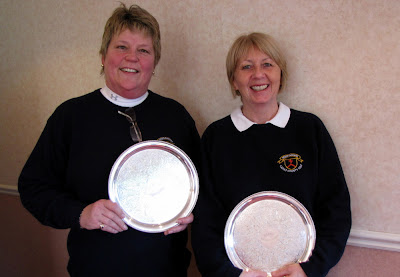 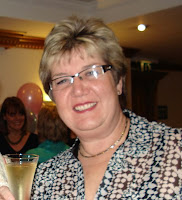 On the Gillian Kirkwood Website there was an article on Multi - Year Champions
West of Scotland player -- Maureen Woodhead (Skinner) was reading their article about multi-year champions.

Until 2008, when she was defeated in the semi-final, she was Lady Champion at Gourock Golf Club for 15 years consecutively.
"This could be a starting figure for our investigations!!" --- Any advance on 15 years, then? 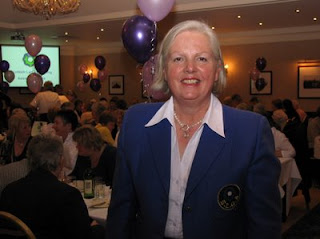 After an enjoyable meal Gillian Kirkwood (pictured above) proposed a toast to County Golf and gave an informative account of its origins.
D&A's Helen Faulds (Douglas Park) proposed the Vote of thanks (See short video at the end of this post)

Helen Faulds -- IN THE VIDEO ABOVE (Dunbartonshire & Argyll) responded with a vote of thanks which included this ode:

C is for your county, of which you're rightly proud,
E is for an event like this with a very friendly crowd.
N is for the nattering --- we're really good at that,
T is for the time flying by and the laughter and the chat.
E is for the efforts of the ladies of the past,
N is for their need to nail their colours to the mast.
A is for the appreciation of every single person here,
R is for the role you played in counties far and near
Y is for years - a hundred of them gone
but it's also for the future years - a new county golfing dawn.
Posted by Carol

The SLGA has extended the closing date for entries to the new Scottish Ladies inter-club match-play foursomes to Monday, March 23rd at 12 noon.
Posted by Carol

In 2008 clubs were asked to send the results of their match play knockout competitions to the SLGA to ascertain the effect of the full difference in handicap. The analysis is now complete and the main finding is that with full difference in handicap the lower handicapped player still retains an advantage and can expect to win 60% of the time. The full analysis may be downloaded HERE
Posted by Carol

The annual mailing to clubs containing the SLGA Handbook, poster and entry forms (including the one for the LGU Medal Finals) will be sent out next week to those clubs which have paid the annual subscription. A quarter of affiliated clubs have still to pay the subscription which was due for payment by 31 January.
Posted by Carol

Take Strokes off your game this season - come along to our putting seminar at the MEARNS CASTLE GOLF ACADEMY at 7.30 pm on Thursday March 12th 2009 and learn how to Putt with Confidence -- Develop a better focus on the green --- Become more consistent
Visiting from the United States Frank Thomas, inventor of the graphite shaft and
Valerie Melvin, Sports Psychologist will deliver this seminar along with PGA Professional Karyn Burns.
Admission is £5 (50% donated to West of Scotland Girls) - SIGN UP by calling 07720442492.
or e -mailing karynburns@yahoo.com
Learn more about us by visiting http://www.franklygolf.com/
Why not come along to Mearns Castle Golf Academy on Thursday 12th March. To read all about it Click Here
Posted by Carol

The Toast to Renfrewshire LCGA -- 100 Years

Renfrewshire County held their Centenary Dinner at The Glynhill Hotel on Thursday 26th February. 114 members attended the Centenary Celebration evening including 11 Past Champions.
Christeen Finlayson (County Captain of Renfrewshire)welcomed everyone to the evening with a champagne reception and was in sparkling form as the host. Dr Nan Blair (nee Menzies)- Ranfurly Castle cut the cake. Heather Anderson(Caldwell) proposed the toast to the County. Vice Captain Trish Brown (Kilmacolm) said grace before the dinner and Ruth Henderson(Williamwood)narrated a very humourous historical ditty.
The guest speaker was Linda Ormiston OBE .
Also at the top table were the County Captains Nora McCrossan (Ayrshire), May Hughes(Lanarkshire) and Kay McCall (D&A)

Want to see an enlarged picture slideshow then Click here

A terrific evening was had by all
Posted by Carol