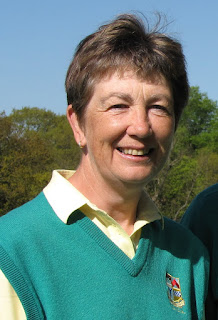 Despite having only one birdie over 36 holes, Alex Glennie (Kilmarnock Barassie) won the Scottish senior women's amateur stroke-play championship at Fortrose and Rosemarkie Golf Club today.
Her rounds of 77 and 78 for 13-over-par 155 gave her a two-stroke victory margin from Fiona de Vries (St Rule) (76-81) with Mary Smith (Tain) a further two shots back in third place with scores of 79 and 80.
Overnight leader Wood (Aberdeen Ladies) could manage only seven pars in a second-round 86, which included two triple bogey 7s, and her 11-stroke slump saw her slide down to a fourth place finish.
It was another day of nightmare scoring. One player took a 16 at the par-5 fourth and reached the turn in 66. There was one 11 and six 10s among the other returns.
Even the winner found the going tough. Glennie was out in 39 with a double bogey 6 at the second and another shot shed at the ninth. She then bogeyed four holes in a row from the 10th, dropped another sot at the 16th before notching a lone birdie at the 17th for halves of 39.
Runner-up De Vries had a quadruple bogey 8 at the 17th in an inward 41 for an 81.
An even local knowledge could not save Mary Smith (Tain) from running up two 7s on outward 43.
The leading 16 players qualified for the match-play championship over the next two days.
There was a five-way tie on 170 for the 16th place and, after a comparison of the second rounds, Lynne Fraser (Fortrose and Rosemarkie), who had an 80, was named the last match-play qualifier and, therefore, top seed Glennie's opponent in the first round.
Those who lost out in the countback were Jennifer Bryans (Harburn) 85, Lynn Terry (Cruden Bay) 85, Louise Graham (Carnoustie Ladies) 88 and Christine McAndrew (Nairn Dunbar) 89.

The West of Scotland Junior Inter-County matches were played on Monday (yesterday)  at Loudoun Gowf Club in Ayrshire.
The heavy rain around the time of the girls going out in their singles matches didn't deter their spirits and once it passed over the remainder of the afternoon was fine.
Renfrewshire got off to a good start winning all of the morning foursomes matches giving them 3 points.
Holders Lanarkshire were next on 1.5 points, Ayrshire's point was a concession from D &A who unfortunately had late call-offs, then D & A who gained a half.
D & A won two of their singles matches, Ayrshire won 3 so the fight was on between Lanarkshire and Renfrewshire.
Lanarkshire made up some ground from the morning deficit winning 3 matches plus the concession giving them a total of 5.5 points, but Renfrewshire's two afternoon wins along with the concession was enough to get them over the line with a total of 6 points.
Congratulations Renfrewshire on your win, but also very well done to all the girls selected to play for your county........the officials and spectators enjoyed it immensely.
We look forward to next year when Dumbartonshire & Argyll will be our hosts.
Click here for some photographs from the day -- Thanks go to June Kerr, Liz Keohone, Audrey MacKenzie and Gillian Kyle for all the photos
CLICK HERE for some photos from Lanarkshire's Jean MacIntyre

SIX QUALIFIERS AT KILMACOLM IN THE WOMEN'S REGIONAL WEST MEDAL

SSS 72, CSS 75 (Reduction only)
The six qualifiers for the Grand Final at Blairgowrie from today's Women's Regional Medal (West) Final at Kilmacolm were:

The Grand Final will be held at Blairgowrie Golf Club on Sunday, September 11.

If any player, caddy or spectator would like to download a photo then you may find one here from the West of Scotland County Jamboree at Douglas Park Golf Club - 20th June - 22nd June 2016 --

Too many to put names against !!

D&A lifted the 2016 County Team Championship at Douglas Park Golf Club for the first time today in 9 years. It was a day of eagles and birdies by many of the players to finish the day in an enthralling and exciting finish.
Renfrewshire who needed a halved match with Ayrshire to secure a win could only look on in despair  as young Louise Duncan (West Kilbride) finished with 3 birdies to win on the 18th against Jennifer Rankine (Haggs Castle) . This was followed on by Ayrshire's Debbie Watt having a birdie 2 at the long uphill par 3 15th and then another birdie at the 16th followed by a par 3 at the 17th to beat Renfrewshire Captain and player Gillian Kyle at the 17th.
It was a day of eagles and more birdies by many of the various teams with Renfrewshire's Megan Briggs having an eagle 3 at the long par 5  8th hole (into the wind), D&A's Lorna McClymont an eagle 3  at the 4th and a great birdie at the last to beat Lanarkshire's Alyson Hendry who had had an eagle 2 at the 11th --- The spectators were well entertained
D&A had 2 win and one defeat the same as Renfrewshire but won on a count back of match points gained.
Captain Karen Maxwell could not believe it --- CLICK HERE FOR SOME PHOTOS
Many congratulations go to all the team and we wish them well at the County Finals in September in Aboyne.
The 2017 Jamboree will take place at Hamilton Golf Club, Lanarkshire.


LANARKSHIRE and RENFREWSHIRE were winners in the opening day of the West Division inter-county women's team championship at Douglas Park Golf Club today.
Ayrshire made a fight in the afternoon singles to nearly overturn a 3-0 whitewash in the foursomes but stalwart Fiona Norris had a good halve match against Catherine Malcolm to clinch the tie
In the other match a D&A v Renfrewshire another great campaigner Renfrewshire stalwart Donna Jackson had an excellent win in the last single of the day against D&A's Anne Laing to help the team to a 5.5 - 3.5 win

If you have take any good photos from your camera or mobile phone that you would like to share at the County Jamboree at Douglas Park Golf Club which begins tomorrow -- please can you drop them into my shared dropbox album  as it will help me to create a better all over aspect of the matches and people over the 3 day event.
It will also cover any times that I am not there.
Here is the link which is private and I will only share any photo if suitable !! --- CLICK HERE

Many thanks and waiting in anticipation -- Carol Fell
Posted by Carol

It is very sad to report the death last Tuesday of Andy Burden, husband of Lanarkshire's Past President Anne. He visited Anne (who had a stroke over 2 years ago) every day in Mearnskirk House until a week before his death.
He will be greatly missed by Anne and the rest of the family. We all send our sympathy to Anne, Bobbi, Katie and Mike and the grandchildren.
Andy's funeral will take place at 10.15am on 24th June at  South Lanarkshire Crematorium.

Uptake so far for the above event is a bit disappointing and Committee are concerned there won’t be sufficient entries to run the competition.

Maybe you’re planning to come but just haven’t yet sent in your entry?   Can we encourage you to pop it in the post now, preferably by the end of June as this will help the organising committee.

A great day is planned with amazing prizes, fantastic raffle, good food and time to catch up with friends.


CLICK HERE FOR YOUR ENTRY FORM
Posted by Carol

MARIE BELL HAS A HOLE IN ONE

Using her driver the ball was struck beautifully and looked good all the way. This is Marie's first hole in one after playing golf for more years than she cares to remember.


Great Britain and Ireland have won the 39th Curtis Cup match by 11.5 points t to 8.5 points after a tension-packed final day at Dun Laoghaire Golf Club near Dublin.


Kilmacolm Open Day is on Thursday 11th August and is a Greensome Stableford with an entry fee of £18 per couple.
CLICK HERE TO GET YOUR ENTRY FORM
Posted by Carol

LOOKING FOR AN OPEN DAY 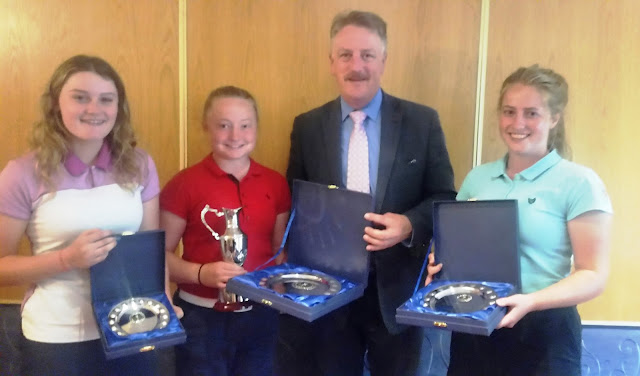 By COLIN FARQUHARSON
Everything's coming up roses for 15-year-old Jennifer Rankine. Last week she won the Clark Rosebowl match-play competition at the Scottish women's champioship at West Kilbride and today (Tuesday), she won the Paul Lawrie Foundation Scottish schoolgirls championship with a one-under-par round of 70. The tournament at Murrayshall Hotel golf course near Perth was scheduled for 36 holes but was cut to one round when play was suspended for "imminent thunder and lightning."

Rankine had a mixed bag of figures - an eagle 3 at the par-5 ninth, birdies at the third, 11th, 15th and 18th plus a double bogey 6 at at the 13th and bogeys at the first, 12th and 17th in halves of 35. Local hope Kirsty Brodie (Strathmore) finished second, two behind with a 72 (36-36) with Shannon McWilliam (Aboyne) third with a 73 which included a double bogey 6 at the 10th in halves of 36-37.
Defending champion Emma Morrison (Craigmillar Park) finished tied 23 with a 91.
Angus (Claire Robertson and Kirsty Brodie) won the team title with a 151 total.
Dumbarton West (Jillian Farrell and Lorna McClymont) were runners-up with 153.
South Lanark were third with 157.

The West of Scotland Championship which was postponed at  Bonnyton on May 1st, has been rearranged for July 24th
Handicaps of 15 and below are eligible to enter. 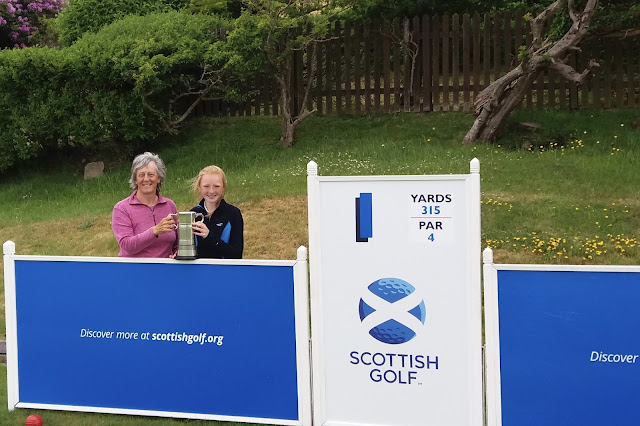 
22 year old Ailsa Summers (Carnoustie) beat the 2014 champion, 23-year-old Gabrielle MacDonald (Craigielaw) in the final  of the 2016 Scottish Championship today at West Kilbride Golf Club and was then presented with the Championship Trophy for the first time.

Catherine Garrett and Louise Duncan, (West Kilbride), won the Grainger Cup which is awarded to the team with the best nett aggregate in the qualifying rounds.
It was an older and younger team combination with  Catherine who is 61 and Louise who is 16!!

Rachel Foster (Turnberry) is only 13 years old and was playing in the Scottish Ladies Championship at West Kilbride this week  to gain experience and try to get her handicap cut.
She is off 9 and scored 83 on Tuesday and 78 on Wednesday (CSS 73 both days). With these scores she qualified comfortably for the Clarke Rosebowl.
In the first round she beat Lesley Atkins, a former Scottish Girls' Champion and winner of the Scottish Schoolgirls Championship, by 2 & 1, and in the afternoon won by the same margin over the more experienced Hannah Scott.
In this morning's semi-final against 15 year old Jennifer Rankin (Haggs Castle) , Rachel was not just as accurate as she had been all week but still played a very good game and holed some super putts. Jennifer's golf was excellent and included 5 birdies which helped her to win by 5 & 4.

TO READS THE FULL REPORT GO TO KIRKWOOD GOLF

LIVE SCORING FROM THE SCOTTISH CHAMPIONSHIPS
Posted by Carol