In the Scottish Girls Amateur Championship - (over Drumoig and Scotscraig)  there was an impressive leader with West Kilbride’s Louise Duncan setting the pace on four-under-par 69. Duncan actually fired eight birdies in a topsy-turvy round, before having to settle for -4.
Duncan leads by five from a trio of players on one over, namely Kirsty Brodie from Strathmore, Hannah Darling (Broomieknowe) and another in-form player, Jillian Farrell from Cardross.
Darling’s effort featured four birdies and an eagle on the 11th and she said: “A lot of putts dropped today which I was really happy about. To win this week would be my aim, but I just want to do as well as I can. If I play my my own game and it’s not good enough, at least I’ve tried my best.”
The top 16 progress to the knockout stages in the girls’ event, in both scratch and nett championships.
CLICK HERE FOR ALL THE SCORES
To read the full report and boys results go to the Scottish Golf Website
Posted by Carol

East Renfrewshire's Gillian Kyle put up a great fight this morning to just lose out a place in the final of the Scottish Seniors Women's Matchplay Championship at Blairgowrie this morning.
She lost by 1 hole to the eventual winner Fiona De Vries (St Rule)

2nd round Scores from Blairgowrie

Gillian Kyle (East Renfrewshire) looked to be heading for the lead at Blairgowrie today in the 1st round of the Scottish Women's Senior Open Championship when she birdied the 14th after dropping shots at the second, fourth and sixth, but unfortunately finished weakly with bogeys at the 16th, 17th and 18th for a share of third place on 79.

The results of the Lanarkshire Spoon Competition held at Cathkin Braes GC yesterday are :
CSS: 71

WEST OF SCOTLAND ENTRANTS FOR THE SCOTTISH SENIORS AT BLAIRGOWRIE

The Scottish Open Ladies Seniors Championship begins tomorrow at Blairgowrie.  There are 100 entrants of which 20 are representing the West of Scotland -- We wish them every success.

Go to Kirkwood Golf for full report
Posted by Carol

READY GOLF FROM THE R&A

SOME PHOTOGRAPHS FROM THE COUNTY JAMBOREE AT HAMILTON GOLF COURSE

Marshals Required at the Ladies Scottish Open at Dundonald

The Ladies Scottish Open starting on the 27th July will be one of the highest profile Ladies events ever held in Scotland outside of the Majors.

With prize money trebled from last year to 1.5 million Euros and sponsored jointly by The LPGA and The LET it is expected to attract 25 of the top 30 players from these tours.

Dundonald Links was designed by Kyle Phillips who also completed the Links at Kingsbarns where the week following the Scottish the British Ladies will be held. An ideal preparation which will have a great appeal to many of the players.

Marshals are required where they will be operating in one of 9 zones covering greens and tees giving an opportunity to see the players at close hand. Ideally volunteers should be available for at least 3 playing days of the event. I have attached to this message a registration form.

RENFREWSHIRE WIN AGAIN IN WEST JAMBOREE ON DAY 2 AT HAMILTON

PHOTOS FROM THE DAY COURTESY OF FIONA ARMOUR

Renfrewshire beat Lanarkshire 5-4 and Ayrshire beat Dunbartonshire and Argyll  6.5-2.5 on Day 2 of the West Division women's jamboree at Hamilton Golf Club.
Renfrewshire led Lanarkshire 3-0 after the morning foursomes but Lanarkshire hit back in the singles, which they won 4-2.
It was Renfrewshire's second win of the three-day event and they lead the table from Ayrshire and Lanarkshire who have both won once.
The overall winners after the third day will represent the West Division in the Scottish women's county finals at Stirling Golf Club from September 15 to 18.
Tuesday's results
RENFREWSHIRE 5, LANARKSHIRE 4
Foursomes (3-0)Megan Briggs and Carol Whyte bt Fiona Norris and Katie Scott 1 hole.Jennifer Rankine and Gillian Kyle bt Alyson Hendry and Lesley Lloyd 1 hole.Donna Jackson and Liz Stewart bt  Susan Wood and Susan McGrenaghan 2 and 1.
Singles (2-4)
Briggs bt  Molly Richmond 6 and 5Rankine lost to Wood 3 and 2Whyte bt Eva O'Connor 3 and 2Alyson McGinnigle lost to McGrenaghan 1 holeDenise Cowan lost to Norris 8 and 6Jackson lost to Scott 1 hole.
DUNBARTONSHIRE and ARGYLL 2.5, AYRSHIRE 6.5Foursomes (0-3)
Anne Laing and Lorna McClymont lost to  Emma Hale and Catherine Malcolm 3 and 2Lorraine Campbell and Fiona Rattray lost to Louise Duncan and Audrey Thompson  2 and 1Caroline King and Lori McDonald lost to Jennifer Linklater and Liz Keohone  4 and 3Singles (2.5-3.5)McClymont halved with HaleRattray lost to Linklater 2 holes.Campbell bt Katie McGarva 3 and 2Laura McGeachy lost to Thompson 1 holeMcDonald bt Malcolm 4 and 2Laing lost to Duncan 6 and 5
HOW THEY STAND
2 wins Renfrewshire
1 win  Ayrshire, Lanarkshire
0 wins Dunbartonshire and Argyll
Posted by Carol

WEST OF SCOTLAND GIRLS ARE WINNERS IN THE SCOTTISH SCHOOLS CHAMPIONSHIPS 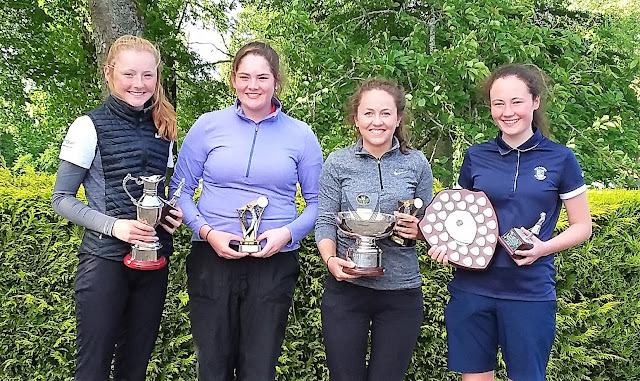 By COLIN FARQUHARSON
Aidan O'Hagan (Renfrewshire and Old Ranfurly Golf Club) and Louise Duncan (North Ayrshire and West Kilbride Golf Club) won the individual scratch titles at the Scottish schools golf championships at Murrayshall near Perth today (Monday).
O'Hagan, who led for two rounds of the recent Stephen Gallacher Foundation boys' event, had scores of 70 and 72 for a total of 142 - four strokes ahead of the boys' section runner-ups Sebastian Sandin (Stirling and Dunblane New GC) and Lewis Irvine (Glasgow and Kirkhill GC) who both had rounds of 75 and 71 for 146. 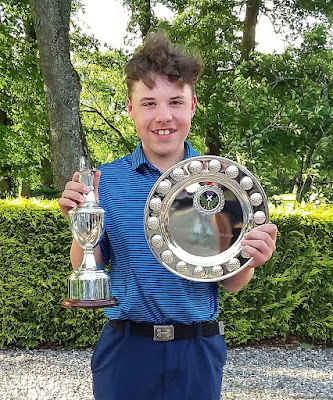 South Ayrshire (Cameron Johnstone and Ruben Lindsay) won the boys' team title with a total of 297, only one shot ahead of runners-up Fife (John Paterson and Ben Caton).
West Kilbride Golf Club member Louise Duncan won the girls' title with steady stores of 73 and 72 for 145, which gave her a five-stroke margin over runner-up Lorna McClymont (West Dunbartonshires and Milngavie GC) (70-80) with Molly Richmond (South Lanarkshire and Strathaven GC) third on 154 (74-80).
The girls' handicap section was won by Jodie Taylor (Dundee City) with a net total of 147 (70-77) off 10.
Megan Ashley (Perth and Kinross and Strathmore GC), playing off five, was second on 150 (73-77) and Zoe Morton (Forth Valley and Auchterarder GC), playing off six, finished third on 151 (75-76).
The girls' team event was won by Lanarkshire with a total of 323. Their representatives were Molly Richmond and Eilidh Crawford.
Dunbartonshire (Megan Docherty and Lorna McClymont) were second, only one shot behind on 324, with Perth and Kinross (Katy Alexander and Christine Wietrzyk) third on 325.
Posted by Carol

Lanarkshire and Renfrewshire have wins on Day 1

By COLIN FARQUHARSON
Connie Jaffrey (Troon Ladies) from Kilwinning is the new queen of Scottish women's amateur golf.
In an absorbing battle between two 20-year-olds who are students at American universities, she beat Clara Young (North Berwick) by two holes in an exciting climax to the 103rd national championship at Royal Aberdeen Golf Club where the rain, which has dogged the event all week, returned for the final over the Balgownie links.
Kansas State University student Jaffrey used a brilliant short game - single putts on the first four greens and six one-putt greens on the outward half - to surge five up at the turn, having gone out in four under par with birdies at the first, fourth, sixth and ninth.
Young, not at her best, did not win a hole until the 11th but it triggered off a two-under-par run which saw her also win the 12th, 13th, 14th and 15th - five in a row, a magnificent fightback by the University of Missouri student from North Berwick which saw her square the match on the 15th green.
Sadly, into the wind and rain, Clara's rally petered out. She bogeyed the 16th to go one down again and then was plugged in the thick and wet rough with her second shot at the 18th, moving the ball only a few feet, and eventually conceded Jaffrey a 10ft birdie putt to go down by two holes
Jaffrey was round in level par to the Scottish women's title to the Scottish U18girls championship she won in 2013.
Young was an approximate one over par for the round which was her third appearance in the Scottish final. She lost to Alyson McKechin in 2013 but won the title at Monifieth in 2015.
Among the spectators at the final was Elaine Farquharson-Black the GB and Ireland team captain who lost to Janice Moodie in the final when the championship was last played at Royal Aberdeen in the early 1990s.
She had won the title at year or two earlier at Machrihanish.

FINAL OF THE SCOTTISH LADIES CHAMPIONSHIPS

GO TO KIRKWOOD GOLF FOR THE FULL REPORT


48 ladies from the 4 counties in the West enjoyed Cochrane Castle GC today despite the strong tricky wind and very thick rough. The course was in remarkable condition after the torrential rain yesterday and the greenstaff must be commended for all their efforts.
Results-
1st Scratch-Alyson McGinnigle/Carol McNally (Renfrewshire) 80
2nd Scratch-Lorraine Campbell/Laura McGeachy (D&A) 89

Thanks go to Allison Bell for results.