The 2008 Greenlees Lunch and Presentation 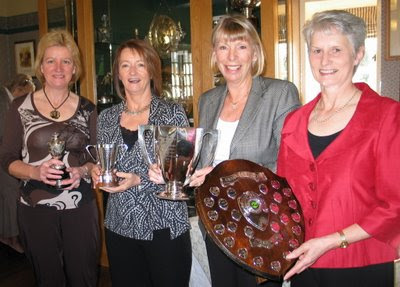 
The new Greenlees Secretary Fiona Roger hosted the lunch and in her opening remarks she said that for one reason or another some clubs had been unable to be with us, and they had sent their apologies. Ranfurly Castle had to restrict numbers to a maximum of 60 and she hoped that this had not caused any problem.

Fiona gave a special thank you to Carol Fell. She told everyone that Carol had worked with her since last autumn to set up the availability for her to record all the fixtures dates, results and ongoing totals for all the seasons matches. She said she could not have done it without her. Always at the end of the phone when he make a mistake and needed her to sort it out!! We both hope that everyone in the clubs has benefited from what we have done and we will continue to try and make it as simple for everyone as possible. She then presented Carol with a beautiful bouquet of flowers for all her help.

Fiona went on to say that she has been involved as a player for Ranfurly since 1975 and in that year Milngavie… with team handicaps ranging from 2 to 14 headed up by Vicki Mcallister won the Greenlees trophy with 43½ points. Troon with handicaps ranging from 1 to 8 and headed up by Miss T.M. Walker and Mrs Belle Robertson both off handicaps of 1 were 2nd with 40½ points. Ranfurly Castle were relegated… records fortunately do not record how many points she contributed to the team in her first year. She also hoped that no one would record her first years effort as Greenlees Secretary

In all the papers and files which Willeen had given her, Fiona had come across the following: a hand written letter dated January 8th 1988 the year Willeen became Greenlees Secretary …………which she read out to everyone.


She went on to say "You ran the Greenlees league, single handed for 19 years. A fate worse than death! " "Your organisational skills, friendly manner and sense of humour stood you in good stead and we all owe you a great debt of gratitude."

" I think if I am still in charge after 19 years someone will have to shoot me and bury me at the bottom of my garden!"

She also went on to say "To be serious for a moment I don’t think anyone realises how much time and effort Willeen spent making sure that the league ran smoothly through the summers and then followed this up with the presentation lunches and December fixture meetings."
" As well as the general day to day running of the league, proposals from clubs had to be dealt with as well as any complaints from clubs - on the whole the latter were not numerous."
"But it all adds up to responsibility of running the league."
"In your time of office the 50th anniversary took place and you organised a Greenlees Jamboree over Troon Portland. A highly successful day. 3 ball best ball competition with 60 competitors. Lunch provided for some 100 people. --No mean feat of organisation "

Willeen thanked everyone for her gift and said that the highlight of her 20 years in office was the meeting of Mrs Greenlees in 1990 at the 50th Anniversary at Troon. Mrs Greenlees got married at aged 17 , had 2 children by the age of 20 and started her golfing career at Prestwick St.Nicholas and died in 1994 aged 94 --- She also said that Rosa Maxwell of Prestwick St Nicholas --- has the full history of Mrs Greenlees (We may put the story on this website)
Willeen on the other hand started her golfing career at Ranfurly Castle . However, she now just manages to squeeze in at no 9 in the Whitecraigs team.


She also said that the rules had basically not changed over the years.
She said she had enjoyed her years as Greenlees Secretary and wished everyone the best for the future.
Ranfurly Captain Mary Hardie then presented the Trophies to all the Winners

Fiona then thanked Anne Robinson (Ranfurly Castle's Greenlees Secretary) for coordinating todays lunch and presented her with a small gift.

She then rounded off the lunch with a poem written by Jennifer Mack (Haggs Castle) which was very relevant to the Greenlees Trophy League and a fitting tribute to Willeen for all she did on our behalf.