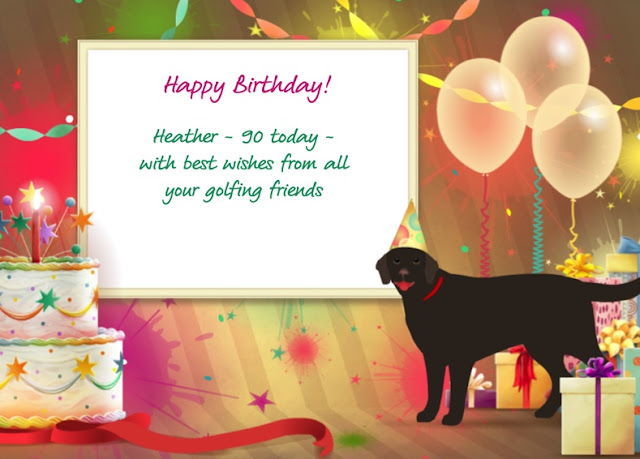 Now, her very good friend Renfrewshire Counties Liz Hale from Caldwell Golf Club has written a very nice tribute to her for her 90th birthday in 2020 which I am delighted to share  --

Heather took up golf at the age of 17. Her passion, up until this point had been horse riding however, after a serious horse  riding accident at the Royal Highland Show, her parents managed to persuade her to sell her horses. She was then left with a choice on whether to take up badminton or golf. Golf won.

Heather joined Caldwell Golf Club, aged 17 and in the same year, competed and won the Paisley Grammar School Championship. By 1948, Heather had a handicap and started playing in the Medals at Caldwell GC which were played on Saturday afternoons after the gents. It was during this time that Heather met Ian, her future husband.

Heather partnered a number of accomplished golfers during her career including Findlay Black (who holds the record scorecard at Caldwell GC) - playing in the final of the Daily Mail Medal Foursomes at Gleneagles and Margaret Sharp at Troon Portland and at Caldwell GC with many successes. Heather also performed with style, most notably at the Highland Open Championship, Pitlochrie, where she donned trousers, shirt, cap and glove – all in the Anderson tartan. A competitor was overheard saying; ‘My God, it’s a bag of pipes she should be playing!’.

By 1958, Heather was a scratch golfer and was chosen to play for the Renfrewshire Team which she continued to do over a span of 32 years.

In 1964, Heather’s international career took off.

Heather played for Scotland in the Home Internationals in Sweden and France. She led the team in the European Championship and then two months later, Scotland won the Home International at Western Gailes. This was when Heather defeated the National Champion of England, of Ireland and of Wales, finishing the series with 100% success and earning the honour of being asked to play for Great Britain and Ireland.

Heather’s most memorable win, of course, was at West Kilbride when she won the

Scottish Ladies’ Championship in 1969. There was a gold Medal but no prize money at that time.

However, history was made when Heather was presented with a replica owned by the late Jean McCulloch of West Kilbride. Jean had, in her earlier years, won the Scottish title on three occasions between 1913 and 1928 and it was this last replica that Heather now regards as one of her most treasured possessions.

In 1980, Heather turned professional, only the second lady professional in Scotland, at that time and then reinstated in 1985 to the amateur ranks.

In the same year, Heather received an Honourable Membership at Caldwell GC. Heather is a Ladies Caldwell GC Champion (20 times) as well as winning many other trophies. She is our current Ladies President. Heather is truly an inspiration to us all!

In 2013 She entered a competition through 'How did I do' . It was to tell a story about a memory of the 'Open'.

Heather's memory told about the time when her young daughter, Lesley, had approached Gary Player and asked for his autograph for her Mum. He was delighted to give this. At which point Lesley asked 'Would you like me to get my Mum's autograph now to give to you ?

A round of golf at Muirfield (with Caddy) on Thursday 20th June, just before the closing of the course to perpare for the Open.

2 nights stay at the McDonald Marine Hotel in North Berwick . (Taxi to the Course included)

Dinner on Thursday Evening with 'Q and A session' with Darren Clark.

They both had a marvellous day  --  the Marine was comfortable, friendly and good food. The clinic with Darren Clark was really informative and interesting - driving and short game- always something relevant you remember to take away with you.

This was followed by a wonderful buffet lunch in the Clubhouse before going out for our round of golf.

We were put into ten teams of four. As Heather and Liz were the only two ladies it was funny to see the expressions on the faces of the two Irish gentlemen who had been landed with us. They were great to play with.

The weather was good, sunshine and they each had a caddy. Heather played well which made the game enjoyable for her and Darren Clark played 2 holes with their team.

It was a great experience to play the course and made watching The Open itself more interesting.

After the game they returned to the Hotel where there was a prizegiving dinner with Darren Clark hosting a question and answer session. The men were given ties with the Claret Jug embroidered on it while Heather and Liz were each given a lovely silver brooch of the Claret Jug --  Nice keepsake.

A really enjoyable experience - a well deserved experience for Heather to add to all her very many golfing achievements. She was quite sad to come away from Muirfield. 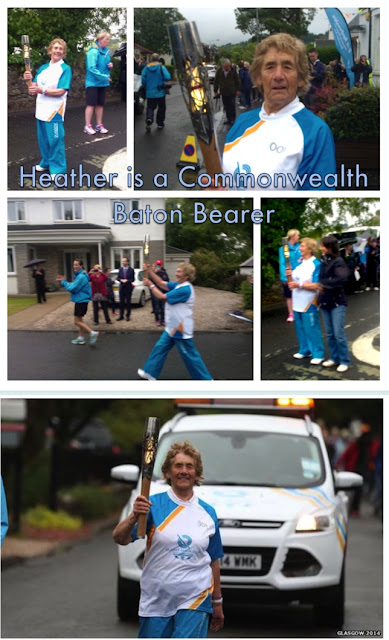 In 2014 she was  first Commonwealth  Games baton bearer in her home town of Uplawmoor in East Renfrewshire. The BBC reported that -- Heather has long been an active member of the community and has been involved with the local council, the church board and the church choir. She is also an accomplished golfer, and won the Scottish Ladies Championship in 1969

It was an early start for Heather as she had to be there  for 6.15am!! The carrying of the torch was at 7.30am and the rain held off. All TV cameras and eyes on Heather in her blue and white uniform as she carried the torch about 400 yards before handing it on. Quite an honour and a day to remember for Heather. Half the village turned out  to see her and we were all given a lovely breakfast in the local hall afterwards. Heather had her hair done the day before and the first thing she asked her daughter on the  the morning of the event was -'Is my hair alright?'  She did well!!

Heather played in the West Vets Summer Meeting in 2016 over her Home course Caldwell with your webmaster who was so impressed with her still wonderful swing -- SO EASY!!

Later that year she was then awarded Honorary Membership of the West Vets at the 2016 AGM alongside Aileen Wilson  - West Vets now have 3 honorary Members - Wendy Cameron being the 3rd - she was awarded the title in 2010
Thereafter, Heather has suffered poor health and been in and out of hospital -- She has however attended many events at Caldwell Golf Club and well looked after by her daughter Lesley.
Unfortunately she has had fall recently and has broken her hip and is back in hospital. She hopes to get home for Christmas.
We all wish Heather a Happy BIG Birthday and a speedy recovery -- and finally your webmaster Carol had wished she could have baked cake for you Heather !!
Posted by Carol