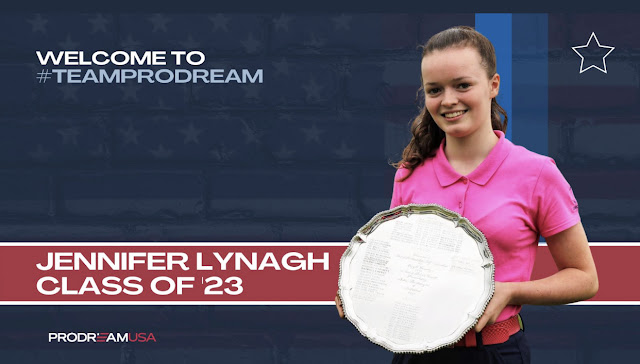 A great way to start off the week with the announcement of TeamProDream latest signing as they welcome Scottish golfer 🏴󠁧󠁢󠁳󠁣󠁴󠁿 Jennifer Lynagh to their class of 2023 roster!
A member Caldwell Golf Club, Jennifer became the first junior to win her Ladies Club Championship last year in an impressive season which saw her handicap come down from 15 to 8.
She has played for the Renfrewshire Ladies County Junior team and is a former winner of the West of Scotland Championship handicap trophy, as well as being the first girl to win the Newton Shield Junior League with the Caldwell GC Junior Team.
Jennifer is a pupil at Saint Luke’s High School and would like to major in Aerospace Engineering.
Her inspiration is Anne van Dam having watched her in action at the 2019 Solheim Cup
CLICK HERE TO READ MORE ABOUT JENNIFER
Posted by Carol