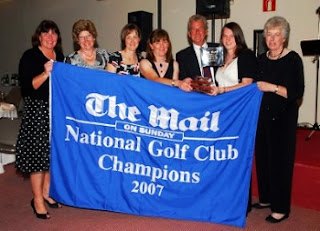 Champagne corks popped as Stirling at last became Mail on Sunday Classic champions, a title they thought they might never win.
Third-placed team in 2001, losing finalists in 2005, they finally
became champions after a 4-1 win over Marriott Meon Valley at
the sun-bathed El Rompido course in Spain.
In the semi final, Stirling defeated Mere 3 ½-1 ½ after Fiona Campbell led the team out against their lowest golfer – a four-handicap county player. Fiona played excellent golf and lost narrowly at the 16th. Tricia Chillas and Elaine Allison managed to secure wins at the 15th and the Stirling team then required one point to reach the final.
Alison Davidson, playing the Mere captain, was two up at the 16th where she hit a magnificent tee shot to the short hole where she was conceded her birdie putt to put the Stirling team through.
In the final, two of the Stirling team got off to a fast start. Elaine built up an early lead against 12-handicapper Jenny Readman and Shelagh Quinn found herself five up at the 12th against their budding young professional player, two-handicapper Katie Thompson. Shelagh finished the match at the 13th with a 6 and 5 win.
In contrast Alison got off to a poor start and was four holes down to Tracey Boyes, who narrowly failed to win her Ladies European Tour card last month. In typical style, Alison fought back strongly to square her match at the turn.
Vicki Stevenson, playing Lauren Davis (9), was two up playing the 16th. She knew how important it was to seal the match as she had to concede strokes at both the 17th and 18th holes. Her shot to the green found the fringe of the green and she had a great chip and putt to secure her par and gain the second point.
Elaine was dormie at the 15th hole and her par 4 secured the elusive title and Stirling became the first Scottish team to win the event.
Alison and Tricia had slender leads at this point but still had to concede strokes at the final holes. With the match won, all of the remaining players on the course agreed to halved matches so that the
Celebrations could begin.
Meon Valley were magnanimous in defeat and acknowledged the quality of Stirling’s victory. Captain Kathy Estcourt said: ‘We were playing a team on a mission. Stirling were just unbeatable today.’
Former Curtis Cup star and past British and Scottish champion, Alison Davidson said: "I just cannot tell you what this means for the team, for the club and for me. I’ve played in some pretty big matches in my career, but when you can go out to play with your friends for your club, there just isn’t a feeling like it.
"I would like to thank the supporters who made the trip to cheer us on. We all had a great time. I would also like to thank Stirling Golf Club and the members for their support and best wishes. Finally, a big thankyou to Guardian Systems for generously sponsoring the uniform for players and supporters – it was greatly appreciated."
Thanks go to Gillian Kirkwood for the report
Posted by Carol