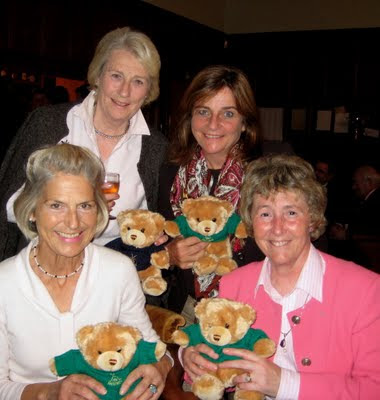 Although the event was mainly played by Mens Teams -- the Mack "Fair" Maidens were awarded the best Ladies Team prize as seen above. -- Click on the under lined link below to read more about the Mark Scott Foundation

The Mark Scott Foundation was formed in 1996 in memory of Mark Scott, a 16-year-old Glasgow schoolboy who was murdered in an unprovoked sectarian attack on his way home from a football match. The idea for the Foundation came from Mark’s family and school friends, and charitable status was achieved in 1997.

The Mark Scott Leadership for Life Award is a joint venture between The Mark Scott Foundation and The Outward Bound Trust, the latter being responsible for the delivery of the programme. It commenced in 1997 with 12 participants; in the current year 200 youngsters, drawn from around 60 schools in central Scotland, are taking part, and over 1000 have now completed the Programme.

The main objectives of the Foundation are to develop the leadership skills of young people aged between 16 and 18, to address sectarianism, racism and territorialism in a subtle manner, and to deliver projects which benefit local communities.

These objectives are achieved by:

· Participating in a 5-day residential course run by Outward Bound at their centre at Loch Eil.

· Dividing participants into clusters of 12 from different but adjacent schools

· Helping participants to identify and deliver a community based project, which includes fundraising. Projects include taking youngsters from a special needs school on courses, designing and painting a mural in an operation waiting room at Royal Alexandra Hospital, Paisley, and providing games equipment for a children’s ward in that hospital.

Finally, successful participants receive an Award at a ceremony in Glasgow.

A few quotations from participants:
“It was at that moment that I started to believe in myself."
Victoria Renton, St Thomas Aquinas Secondary School, Participant 2004/5
It was “a once in a lifetime opportunity…. On the Outward Bound week I was sharing a dorm with people from other schools I would never have met or spoken to before, from all backgrounds, and we all became friends…. we were in it together, sharing amazing experiences that we may never get the chance to do again.”
Adam Lloyd - James Young High School 2006/7
"Mark Scott is not just Leadership for Life, it's friendship for life".
Megan Swanson and Amina Rafiq, Holyrood Secondary School, Participants, 2006/7

Click Here to see the West Of Scotland Championship earlier this year at Prestwick in which Jennifer Mack played in.
Posted by Carol