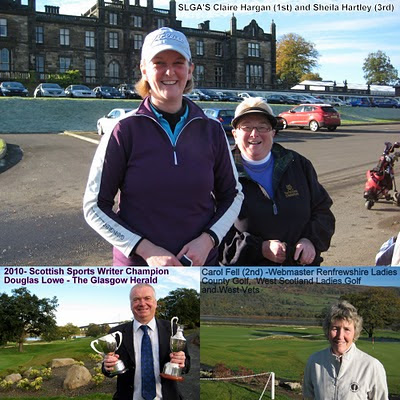 Herald sports writer Douglas Lowe scored a triple whammy at the frost-abbreviated Scottish golf writers and guests' golf championship at Mar Hall Hotel golf course near Bishopton, Glasgow today (MONDAY).
Frost delayed the start of the scheduled 18-hole competition from 9.30 to 11am and play was only possible on holes 10 to 18 at that time. Because some of the competitors faced a long journey home to the North and North-east of Scotland and a prizegiving lunch had been arranged, it was decided to cut the tournament to nine holes.
Lowe, despite a knee injury, regained the Alex Fox Trophy as the leading golf writer with a Stableford score of 17pt off a handicap of 12.
"I have won the trophy before but it was so long ago that Nick Rodger must have still been in short trousers," said Douglas who had 2pt to spare from Fergus Bisset (Golf Monthly), playing off 2, and twice past champion Mike Aitken (The Scotsman), playing off 15.
Lowe's prizes included a free tee for four at any of the Gleneagles Hotel golf course, midweek or weekend.
Lowe's total was higher than anyone achieved in the male and female women guests' categories which earned him the Belhaven Trophy for overall supremacy.
Just to cap the "wounded warrior's" day, Douglas figured in the winning team of Stewart McDougall (DBS Sports) and Ronnie Cully (Evening Times) whose 32pt (best two from three scores to count) saw them triumphy by a single point from Scottish international Claire Hargan (SLGA), Mike Aitken (The Scotsman) and Dave Edwards (Press and Journal).
Former Northern Open champion Peter Smith, Mike Woodcock (St Andrews Links Trust) and Sheila Hartley (SLGA) took third place on 29, beating Fergus Bisset (Golf Monthly), Michael Gannon (Aberdeen Press and Journal) and golf course designer Graeme Webster from Inverurie on a tie-breaking countback.
Mike Woodcock, playing of 12, pipped eight-handicapper Stewart McDougall for the Bunkered Trophy as the leading male guest. They both finished with 15pt. Mike had the better last six holes' points total. He won a free tee time for four at The Duke's Course, St Andrews.
Graeme Webster, playing off 10, finished third in the male guest category with 14pt, the same total as SGU Press and Marketing Officer Ross Duncan (5). Webster had the better last three-hole points total.
SLGA Tournament Officer Claire Hargan, a one-handicap member at Mortonhall, won the Leading Lady Guests' section with 16pt, one ahead of West of Scotland women's golf webmaster Carol Fell (10) and two clear of Sheila Hartley (SLGA).