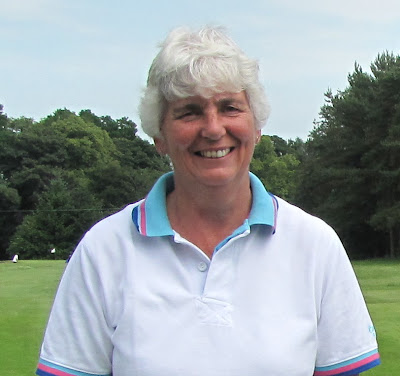 It is with huge regret that I report the death of Moira Thomson (nee Dewar) at the young age of 61.
She died this morning (19th November) at the Western General Hospital.   I am sure all who read this will be as shocked as I am at the speed in which her illness took her.   It has been only 13 weeks since her diagnosis,  and she fought a courageous battle to the end.
Moira won the Scottish Girls Championship at Dalmahoy in 1968.   Starting out as a County player for Midlothian, and then a stalwart of the East Lothian County team,  she really came into her own on reaching the age for seniors golf,  and was a regular Scottish Senior International player for over 10 years.
She worked very hard on her golf in these latter years,  and gained the respect of her international colleagues as a strong match player.  She thoroughly enjoyed the camaraderie of senior golf and her  friends at Gullane will miss her in their regular Saturday game.
Our heartfelt sympathies go to her husband Alastair, her daughter Claire and son Andrew, her sister Anne and their families.
Funeral arrangements will be announced later.
To read more go to the EAST VETS WEBSITE -- Some memories from recent times are seen in the photos below CLICK HERE for larger photos