May Hughes receives Honorary Membership at the Lanarkshire County AGM 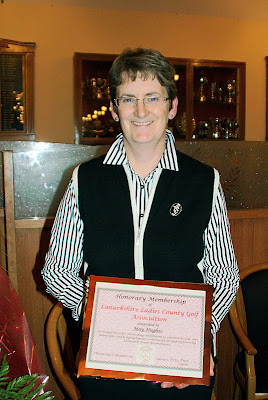 Long-playing Lanark Golf Club member May Hughes received Honorary Membership of the county at the AGM. This was the speech given by county captain Lesley Lloyd when making the presentation:
"May Hughes has been a member of LLCGA since 1979 and played for the County Team between 1983 and 2010. May was selected for this year’s team but decided it was time to hang up her red jersey.
During that time, especially in the 1980s and early 1990s, Lanarkshire were a very successful team and May was part of a winning team that qualified for and won the Scottish County Finals on 4 occasions.
May was County Champion in 1993, 2003 & 2004 and runner-up on 3 other occasions.  As well as being a very successful golfer, May served on Committee from 1996-99 and she was County Captain in 2008 and 2009 in our Centenary Year.
Since becoming eligible for Seniors and Vets golf May has twice been West of Scotland Vets Champion in 2008 and 2010, was runner up in the Scottish Vets Championship in 2010, represented the Scottish Vets Team on five occasions and this year represented Scotland in the Senior Home International Matches.
May, in recognition of your outstanding contribution and commitment to Lanarkshire Ladies County Golf Association over many years I would ask you to accept Honorary membership of our Association."
To read the full report go to the Lanarkshire County Website
Posted by Carol