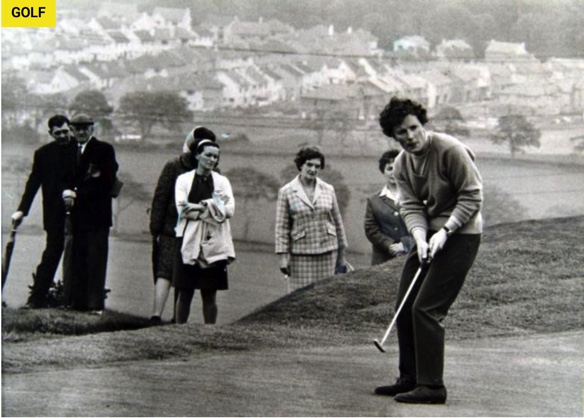 Belle Robertson has played just one round of golf this year. She’ll double that tally with another today.
In the midst of the coronavirus pandemonium, the isolated tranquillity of life in Kintyre has its benefits.
“I’ve not heard of anyone coming down with anything just yet and maybe it’s one of the advantages of living out here,” said one of Scotland’s most decorated golfers. “I have a two-ball arranged for Friday at Machrihanish. I’ve not played since January so here we go again.”    ---
(Hopefully you got that game Belle before the course shut down)
By her own admission, Robertson is now a “fair weather golfer” and given that the weather in recent weeks has been about as uplifting as peering at a COVID-19 infection rate chart, it’s hardly surprising her outings are now few and far between.
As club golfers the world over try to muddle on as best they can and keep playing in some form or another against a backdrop of woe, worry and wearying uncertainty, Robertson doesn’t need to be reminded about the lasting lure of this grand game. Old habits die hard.
“Golf is part of my life,” said the multiple Scottish Women’s champion and Curtis Cup mainstay.
“When it’s a nice day you look out and you think a walk would be nice.
“But a walk on the golf course and a game gives that walk more purpose. There’s an excitement to it … and some frustration too. There are all sorts of emotions involved. And that keeps you going.”
Robertson’s longevity is well renowned. She won the first of her seven Scottish titles in 1965 and the last of them at the age of 50 in 1986.
As something of a trailblazer in terms of exercise and stretching regimes while in her pomp, Robertson remains a sprightly specimen as she “closes in on 84”.
The golfing mind, meanwhile, remains as sharp as a Dunaverty wind. The passing of the years, though, bring their own little vexations for this great competitor.
“When I’m golfing now I keep saying ‘I used to be away up there when I was playing my second shot’,” she said with a wry chortle. “That’s the frustrating thing about golf now; not having the power. The will is still there.
“The one thing, at least, is that I’ve been lucky with my putting.”
Robertson remains a keen observer of golf at all levels. “But what will we do without The Masters?,” she said of the demise of golf’s rite of spring on a savaged schedule.
The rise of more events where men and women compete side by side, meanwhile, has certainly received the Robertson seal of approval.
“It’s a great thing,” she declared with gusto. “I can remember they did quite a bit of this in Sweden with medals together.
“They thought we were crazy the way we played golf over here. It can only help the game, certainly the amateur game.”
It’s 60 years now since Robertson made the first of seven playing appearances for GB&I in the Curtis Cup.
She lost 8&7 to US great Judy Bell in the singles. “But we’ve been best friends ever since,” noted the Scot.
The camaraderie of golf endures. And in these turbulent times, we need that camaraderie more than ever.
Posted by Carol