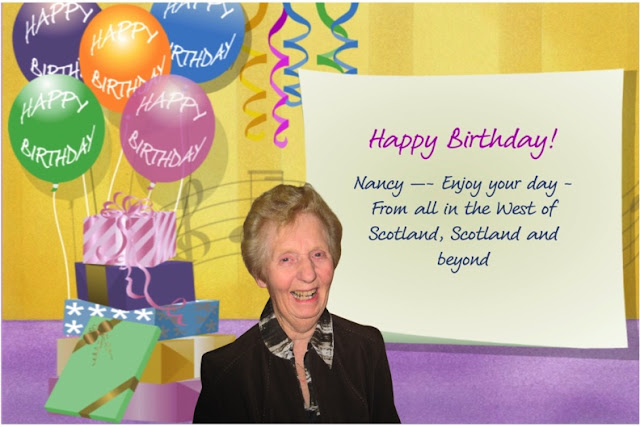 CLICK HERE TO OPEN YOUR BIRTHDAY CARD NANCY
Many congratulations go to Nancy Chisholm MBE who is celebrating her 90th birthday today (May 27th 2021)
Nancy served as LGU chairman in 1997 and Scottish Ladies Golfing Association president from 2003-2007.
In 2009 she then became Honorary Vice President of both the Ladies Golf Union and Scottish ladies' Golfing Association
She was also a R&A Rules official at events such as the Curtis Cup and was part of the introduction of the Congu Handicapping system in 2003
A lifelong member of Prestwick St Nicholas Golf Club, which she joined as a junior member.
A former Ladies Club Captain, and Club Champion of St. Nicholas ladies on no fewer than 10 occasions and Greenlees Captain.
She represented the Club in National events, with Betty Singleton and Louise Crooks
Was Captain of the Ayrshire Ladies' County Golf Association , then the President and is now the Honorary Life President of Ayrshire Ladies County Golf Association.
Nancy held many senior positions in ladies golf at a national and international level, as well as having undertaken refereeing duties at many major international amateur event, and was awarded the MBE for services for the many years of voluntary work on behalf of ladies golf and golfers.
In 2004, Prestwick St. Nicholas conferred Honorary Membership on Nancy in recognition of her outstanding contribution to golf in Scotland and further afield.
She is also a member and past captain of West Kilbride Ladies, a club which holds her in equally high esteem as St. Nicholas for her contribution to club and country over the year. Also the Junior Girls event was introduced in 2009 at West Kilbride where many West Girls played for the Nancy Chisholm Trophy
She was  honoured in the Queens Birthday Honours List in 2009 with the award of an M.B.E. for voluntary contribution to ladies golf
Ayrshire Ladies' County Golf Association committee organised a gift of a "celebration" rose for her and took the opportunity to present it at Kilbirnie Place Golf Club earlier this month
CLICK HERE TO READ MORE AND SEE PHOTOS FROM THE DAY
SLIDE SHOW OF SOME PHOTOGRAPHS SINCE 2003
Go to DOWN MEMORY LANE NANCY CHISHOLM ALBUM  ------ (Click on text on photos to see details) - apologies if there any errors and I will sort
A final  footnote to one of your webmaster's memories was :
In 2003 all clubs in Renfrewshire were represented at a meeting to hear more details of the CONGU system that is proposed to be introduced in February 2004. Nancy Chisholm from the SLGA with her "handicap hat on" as the West of Scotland no longer has a Handicap Advisor, reported exceedingly well on the many decisions that have been made. She also gave some advice for the handicap secretaries and their committees. However, the CONGU system is still to be ratified in Scotland at the SLGA AGM in Perth on Wednesday 26th November. -- CLICK HERE TO READ MORE
Now in 2021 -- We are going through it all again with the new WHS handicap system  -- I AM SURE YOU ARE GLAD TO BE OUT OF THIS ONE !!
HAPPY BIRTHDAY
Cheers Carol Fell
Posted by Carol