Kylie Henry finishes with a flourish in Dubai -- A course record 63 !!


Australia’s Minjee Lee captured her first LET title at the OMEGA Dubai Moonlight Classic with a clutch birdie putt from 20ft at the first extra hole to beat France’s Celine Boutier in a thrilling shoot-out under the Middle Eastern moonlight.
Tied at the top of the leaderboard in regulation at ten-under-par, just one shot ahead of overnight leader Caroline Hedwall, defending champion Nuria Iturrioz and Germany’s Laura Fuenfstueck, the pair could not be separated after Minjee posted a consistent round of 69 (-3) to Boutier’s 68 (-4).
Aside from the top of the leaderboard, Scotland’s Kelsey MacDonald finished strongly with a 68 to be in 8th position and West of Scotland's Kylie Henry had a day to remember, firing a course-record round of 63 to catapult herself from three-over-par to six-under-par and into the top ten.
Speaking about the round, Kylie said, “It’s my lowest stroke play round and It felt great. I hit it solid all round and was hitting it fairly close on most holes. The main highlight was the par 3 8th when I hit it to a foot with my 8 iron.”
She continued, “I’m just so delighted to be playing tournaments. I’m so grateful to everybody at the Tour who is working doubly hard and all our sponsors who’ve got us back up and running through this pandemic. It’s made us all remember how much we love the game and we’re really appreciating the opportunity to be out here competing for a living.”
Dubai-based Scot Alison Muirhead also finished in the top 20, signing off with a 70 for three-under.
CLICK HER FOR FINAL SCOREBOARD
Posted by Carol 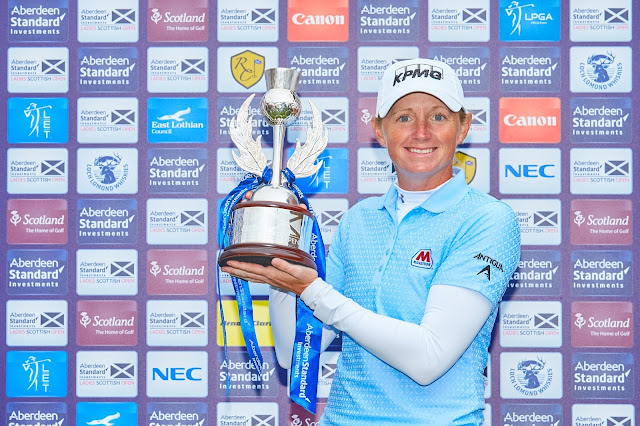 Stacy Lewis holed a long birdie putt to see off three rivals at the first playoff hole and win the Ladies Scottish Open on Sunday, giving the American a first title in nearly three years and a confidence boost ahead of the British Open.

The 35-year-old Lewis took a swig of champagne beside the 18th green after securing a 13th victory on the LPGA Tour — and first since the birth of her first child, Chesnee, in October 2018

The former top-ranked Lewis started the final round a stroke off the lead held by Azahara Muñoz, and shot 1-over 72 to join Muñoz (73), Cheyenne Knight (70) and Emily Kristine Pedersen (68) in a four-way playoff at the Renaissance Club.

The approach shots of Muñoz and Pedersen didn't make it onto the green, and they rolled putts up to near the hole.

Lewis made her birdie putt from about 20 feet, which went slightly left to right, leaving compatriot Knight a putt of around 15 feet to take the playoff back down the 18th. Knight's putt slid by the right side of the cup.

West of Scotland's Kylie Henry had another good round today (3 under par)to finish tied in 12th place on 1 under.

Lewis will look to follow up this win on the links with another at Royal Troon next week, when the first women's major of a reshaped golfing year takes place. She is a two-time major winner, triumphing at the British Open in 2013. -- REMEMBER DOWN MEMORY LANE PHOTOS OF THE 2013 RICOH LADIES BRITISH OPEN 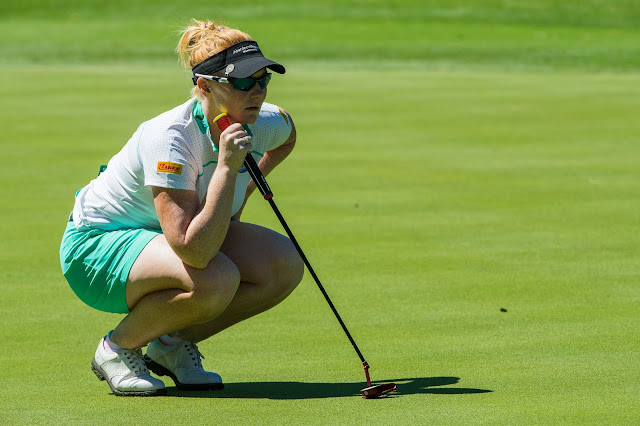 West of Scotland's Kylie Henry finished T7 on 210 today in the ActewAGL Canberra Classic with scores of 68, 70 and 72