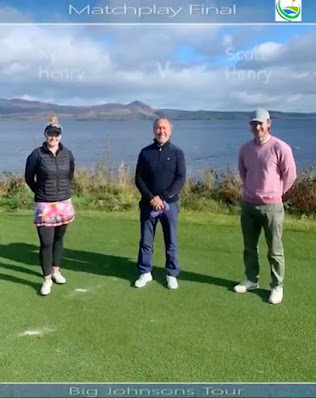 Bragging rights were on the line in the Henry household last weekend, when LET player Kylie Henry and husband Scott, a Challenge Tour card holder, went head-to-head in a title battle.
The final was played over 18 holes at Loch Lomond in the Big Johnsons Tour Matchplay, an event set up this year by John Henry, Scott's younger brother, to provide a playing opportunity for home-based pros in a Covid-hit season.
Kylie, a two-time LET winner, beat former Walker Cup player Michael Stewart at Mar Hall in her semi-final, while Scott defeated Sean Lawrie on his home patch at Portlethan.
The final was an exceedingly close affair with Scott winning at the 19th !!
CLICK HERE TO SEE THE HIGHLIGHTS
Posted by Carol