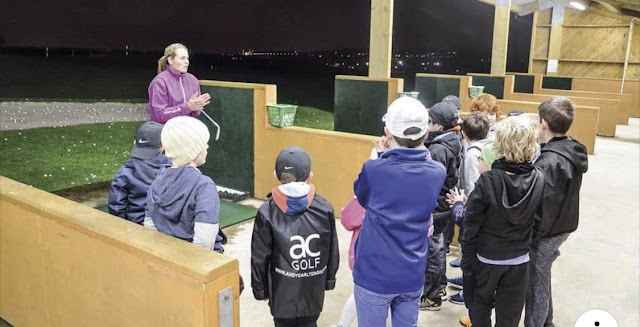 By Nick Rodger (The Glasgow Herald)
Back in ye olden times, recreational opportunities for the bairns were pretty limited. If you weren’t wiping soot off your face after 12 hours in a chimney then you were running up and down a cobbled street like something out of a Hovis advert.
These days, of course, there are more distractions than you can shake a stick at. And yes, there are probably even classes in stick shoogling. Getting the young ‘uns into sticks of a golfing kind has been Clare-Marie Macaulay’s all-consuming passion for a few years now and her sterling work with the juniors at Paisley Golf Club continues to bear fruit.
In this age of swipe-and-scroll gadgetry, prising a younger generation away from the instant gratification of their handheld thingymebobs almost requires the hydraulic jaws of life.
“That’s the tough thing, but all I can do is make it as much fun as possible,” said Macaulay of an enthusiastic approach which has certainly breathed new life into Paisley’s junior scene. “I’ve been here for about six years and there was nothing much in place when I started. The lack of juniors was an eye-opener.
“I remember my first morning class, we had four turning up. But we started it anyway and they came for four weeks. We got it up to eight and then eight in each class and it grew from there and we started our Junior Academy. The junior membership at the club is now maybe 60 to 70.”
Getting the children hooked early into a game that can be enjoyed – and often endured – for the rest of their lives is the key for Macaulay who works alongside her brother, Paisley club pro Andy Carlton, in this family affair.
“We trialled a session for three and four-year-olds and ended up getting over 30 turning up,” she added of her Golf Tots programme. “I was quite taken aback. We opened a performance studio up which allows us to coach in the winter. They have all the trackman technology and the virtual courses. They love it. I’m not sure what they’ll think when we actually go outside, mind you.”
With its ageing demographic and declining membership figures, it’s easy to find downbeat statistics about golf in the game’s cradle that can be about as uplifting as reading a court summons.
There is plenty of good work being done at clubs throughout the country, though, and Macaulay prefers to adopt a more optimistic outlook.
“People who are non-golfers tend to see it as not very cool,” she said. “But we have been in schools round Paisley just to give kids the chance. You ask them at the end of a lesson ‘is that better than you expected?’ The response is usually ‘yes’.
“I talk to the girls who come to us and say my best pals are my golf pals.
If you get to play in events as you develop, then you’ll be with your friends all the time and they’ll grow to become lifelong friends. That’s the great thing about golf.
“It’s maybe too late for some clubs but I am a bit more optimistic about the future than I was. There are more initiatives, there are more female PGA pros going about too. People are trying. We need to be more positive.”
With the Solheim Cup coming to Glen­eagles later this year, Macaulay, who also helps run a Junior Golf Tour which has grown to incorporate 23 events, is hoping the women’s transatlantic team showpiece between Europe and the USA can act as a springboard for participation.
“I don’t think we can underplay the importance of the Solheim Cup,” she declared.
“We need to get as many juniors to that as possible. I remember the last time it was in Scotland, I was maybe 11 or 12, and I thought it was amazing.
“Youngsters will go to that and realise that golf is not old and boring. These are fashionable young girls who are great at their sport. The Solheim Cup is a huge opportunity for us.”
For more information on Clare-Marie Macaulay's junior tour, go to www.juniorflagchallenge.co.uk