By BEN PHILIP
The 14th West of Scotland Trophy students' golf tournament came to a close on Friday with two wire-to-wire winners in Stirling’s Penny Brown and Jordan Sundborg.
Once again Western Gailes was beset by atrocious conditions, the final day proving possibly even windier than the first two. This brought to a close the perfect storm of weather throughout the competition and in which every player’s performance was to be commended. 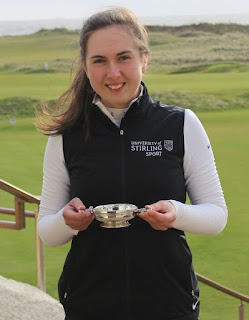 Brown (pictured right) started the day with a six'-shot lead over team-mate Hazel MacGarvie and extended that lead with a par at the first. However, a double bogey 6 at the 4th, coupled with MacGarvie’s birdie at the sixth cut the gap to four strokes
That would prove to be as close as Hazel got as back-to-back bogeys saw both players turn in 41. Two birdies on the back nine from Penny closed the door on the competition and only a double bogey on 18 prevented her from being the only player to shoot in the 70s each day, a back nine of 39 seeing her sign for an 80. Her final score of 235 gave her an eight-shot winning margin.