GREENLEES TROPHY AND PRESENTATION LUNCH - CATHKIN BRAES ARE THE 2019 CHAMPIONS

This was attended by 57 ladies representing the 25 Clubs that are in the 3 Greenlees Divisions.

Old Ranfurly's  Maureen Taggart and Merope Dunlop helped to collect in the Greenlees Fees and Douglas Park had Lindsay Mclean and Gill Hendry welcoming the visitors to the club.

West of Scotland Greenlees Secretary Maureen Mitchell (Old Ranfurly) opened the proceedings by welcoming everyone to the 79th Anniversary Year of the Greenlees Trophy.

She then introduced the top table guests - Denise Macnaughton , the Lady Captain of Douglas Park , who welcomed everyone on behalf of the Club and announced that if everyone checked behind their seat if they found a card they were invited to take home the flowers after the lunch.

She then introduced Carol Fell and said "Carol does a fantastic job keeping her website CaroFellGolf up to date which includes the  Greenlees Results which are available for all to see."

Next introduction was that of  Douglas Park's Past Greenlees Secretary Lynda Smith who was there instead of Susan Griffin (DP Greenlees Secretary) who was down in London. Susan had been the main organiser of all the the lunch arrangements and table plans and with the help of a few others enabled the event to be held.

Everyone then enjoyed an excellent lunch and much chat could be heard.

She welcomed Aileen Wilson from Haggs Castle who in her first Greenlees match played for Caldwell in the 1950's and over 60  years on still represented Haggs Castle this year -- a fantastic feat !!

Cathkin must have found it all too much because they withdrew after year one and were replaced by Balmore!!
Fiona also found a report written after the 1934 matches, I presume by the then Secretary. It read ----- matches have not been so keanly contested this year and certain clubs are lacking in team spirit. ----------. Our recent Secretaries would not dare to write such a report as with the usual close fought matches we have it is right up to the bitter end to decide our winners

Now a great Cathkin Braes Team has won the trophy for the  3rd time in 6 years — Many congratulations
Carol said "I am not too sad to be out of the 1st Division after 41 years (Ranfurly Castle - 40 ) and now playing for Douglas Park— I have enjoyed 100s and 100s of matches and love the camaraderie."

Willeen McCallum took over as West of Scotland Greenlees Secretary in 1988 and in 1990 - the 50th anniversary took place and she organised a Greenlees Jamboree over Troon Portland. A highly successful day. 3 ball best ball competition with 60 competitors. Lunch provided for some 100 people. -- No mean feat of organisation She then retired in 2007

In 2007 I was asked at that time by Isabel Crawford the then West of Scotland Secretary if I would be the Greenlees Secretary  — Results were no longer going into the Herald and a real difficulty in communicating the results.
It was also decided  to try to make a change of Secretary every 3 to 4 years  — I then set up the spreadsheets for the results and Fiona Roger then took over in 2008 - 2011 when the 70th Anniversary was in 2010.
Anne Dunn from 2012 - 2016 (75th Anniversary Tri Am was so well run at Cathcart Castle in 2015 ) and then Maureen  who will still be the Greenlees Secretary in 2020 when it will be the 80th Anniversary.

After that Maureen will then step down and we hope to fill the role of West of Scotland Greenlees Secretary for 2021 so that no-one is ever in the job for too long - Maureen is enjoying doing her roll and we thank her for all her hard work during the season.

Also it would be greatly appreciated that with the ever growing age of technology --  I am quite willing to help iron out any communication problems   -- and if anyone has ideas they would be most welcome.

East Renfrewshire GC is the next club to hold the lunch and perhaps be able hold an 80th Anniversary Celebration at their club  All help will be available.

Finally I would like to congratulate Donna Jackson from Troon who had a hole in one at the 4th hole at Williamwood against Julie Wilson  and Julie tells me the same thing happened to her last year when Lenzie’s Evelyn Crosbie had a hole in one at the same hole against her — Julie has been having a hard time  --
I was then also reminded that Lindsay Mclean (Douglas Park) had a hole in one against Cathkin Braes in their  final match and June Kerr (West Kilbride) also had one in a Greenlees match this year followed by an eagle I think !!!

Finally, I like to take this opportunity to congratulate the Williamwood Annodata Team who are through to the semi-final in Spain of the Annodata UK Golf Club Classic with a hard fought 3-2 win against Kenwood Park Golf Club in a home match in the quarter finals.They are now off to play their semi finals at the Montecastillo Resort near Cadiz in Spain on 20th and 21st November.

Maureen then informed everyone that the Greenlees AGM would be on Tuesday 19th November at Old Ranfurly -- The exchanging of dates for matches would be first at 10:15 am with the AGM at 11am.

Maureen then invited the Captain Denise to present the trophies to the winning teams - see video. -
Bothwell Castle, Whitecraigs, Troon and Cathkin representatives all said a few words  -- Apologies to Bothwell Castle -- I missed hitting the record button  - It was an excellent speech !!

Division 3 was won by Bothwell Castle, Runners up Hilton Park.
Whitecraigs winners of Division 2 and runners up Haggs Castle.

The runners up in Division 1 were Troon who were  beaten by the overall winners - Cathkin Braes. 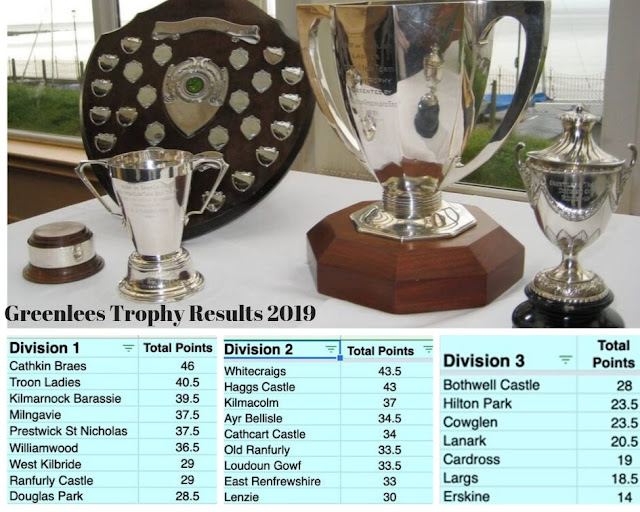