Ranfurly Castle's Ladies Captain Mary Craig had her Social Evening on Thursday 29th March 2007 . Approx 50 Ladies attended a superb evening with some wine tasting from Jason Harvey from T M ROBERTSON (Wine Sellers) --- from Edinburgh and a Fashion Show organized by Sarah Kirby of GLENMUIR
CLICK ON ANNE JUDGE TO SEE SOME PHOTOGRAPHS OF THE EVENT--- Then click on the Back Bar on your toolbar to come back to this page

A mailing to Handicap Secretaries was sent out by the SLGA in January and included the following items which can be read here.

Email ThisBlogThis!Share to TwitterShare to FacebookShare to Pinterest
Labels: Others, SLGA

The SLGA have some Jewellery for sale

Email ThisBlogThis!Share to TwitterShare to FacebookShare to Pinterest
Labels: Advertise on this site, SLGA

The Garten Girls at Milngavie

The 2007 Spring Meeting of the Garten Girls took place at Milngavie Golf Course today. Anna Telfer (Captain of Milngavie) hosted this 6 monthly event today. Helen Faulds, Janice Paterson, Noreen Fenton and Fiona Roger were in Team 1. Emma Wilson, Carol Fell and Anna Telfer were in Team 2. Unfortunately Jennifer Mack was unable to be there --- away on holiday. Emma's team were the winners after the average Stableford points of the teams were calculated. It was a glorious day and everyone had a terrific day.
For those who do not know who the Garton Girls are --- they are the players who entered the Scottish Seniors in 2005 and stayed with Fiona in Boat of Garton
To see some photos of the day click on the picture below:

Email ThisBlogThis!Share to TwitterShare to FacebookShare to Pinterest
Labels: Milngavie, Others

Anna Telfer is the Captain of Milngavie Golf Club 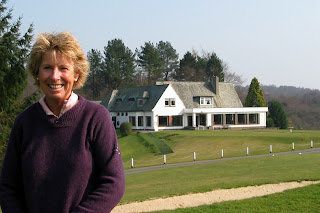 Congratulations go to Past Captain of D & A Anna Telfer who is the 2006 - 2007 Club Captain of Milngavie Golf Club. There is no Ladies Captain anymore with 2 convenors from the Ladies section on the main committee. We all wish Anna every success in her new appointment.
(click on the photo to see an enlargement)
Posted by Carol

Email ThisBlogThis!Share to TwitterShare to FacebookShare to Pinterest
Labels: Milngavie

Be careful when flying with Globespan !

Helen Faulds (Douglas Park) and Carol Fell (Ranfurly Castle) went to Portugal for a golfing holiday on Sunday 18th March. They flew with Globespan who left their golf clubs in Glasgow because of overloading. This is happening more frequently ---- SO ALL GOLFERS BEWARE !!! --- 25 sets were left in Glasgow

Helen got her clubs 48 hours later on the Tuesday and the Fells got their clubs on Wednesday afternoon on their return from the golf --- 72 hours later.

On the Homeward journey to Glasgow today everyone on the flight had there golf clubs left at Faro !! --- Approx 50 sets of Clubs ---

--- THIS IS WHAT GLOBESPAN SAY :May we refer you to our Terms and Conditions which clearly states:

72 Ladies attended the Bridge Drive held at Douglas Park on Wednesday 14th March
Anne Paton was Tournament Director and the Committee did their usual home baking for the afternoon tea.
The raffle raised £293 for Macmillan Cancer Care.
Janet Dow - Ladies' Captain said - " I would like to thank everyone who donated prizes to the raffle which helped to raise such a worthwhile sum"
Posted by Carol

3 Clubs and A Putter - Douglas Park

The Mail on Sunday tie between Loudoun and Ranfurly Castle was played today at Loudoun Golf Club, Ayrshire. Loudoun progressed to the next round by winning 3-2
Posted by Carol

Douglas Park played Bothwell Castle (Away) in the 1st round of the Mail on Sunday today (11th March 2007) The Douglas Park team of Helen Faulds, Carol Fell, Joan Gemmell, Elinor Grant and Lynda Smith managed to win 3 - 2
Posted by Carol

Christeen is a Granny

Congratulations go to Christeen Finlayson who has just become a Granny at 8:31 am today. A wee boy ( 9lbs 2oz) ! -- both mother and baby doing well. They live down in Surrey - Christeen is having 18 tonight to wet the baby's head and probably heading down south tomorrow.
Posted by Carol

Mary Craig (Ladies Captain) would like to let all the Ranfurly Castle Lady members that she is holding a Social evening on Thursday 29th March. If you have not already put your name on the sheet in the locker room then please do so or give her a call. ------IT SHOULD BE A GREAT EVENING

Click here for details of the event
Posted by Carol

The March Medal that was to be played today, at Ranfurly Castle, has been postponed until next Wednesday (14th March 2007).
Posted by Carol

Rhona has a baby Girl

Congratulations go to Rhona Wilkie and Ronnie Murison on the birth of their daughter Hazel on Sunday 4th March 2007 at 4:30am. Hazel weighed in at 7lbs 5oz. Both mother and baby are doing well.
Posted by Carol

Joke of the Day

Email ThisBlogThis!Share to TwitterShare to FacebookShare to Pinterest
Labels: Jokes 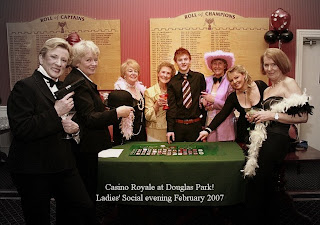 Douglas Park Lady Captain Janet Dow held her Social Evening on Friday 16th February. The Theme was Casino Royale. Cocktails were served on arrival,a few casino games played, dinner and wine and then some wonderful singing from the "Bond" films. Most ladies got dressed up for the evening and great fun was had by all. 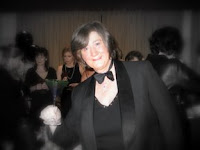 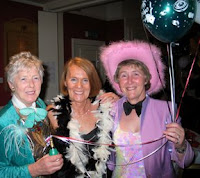 (Can you spot your webmaster ??!!!)
Posted by Carol 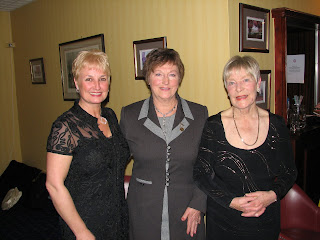 A wonderful night of singing and laughter with Irene on the keyboard & Chris singing some of the old favourites. These two very entertaining ladies come highly recommended and had everyone singing along and laughing at their highly amusing style. Pictured here with Jo Riddell, Captain at Erskine this year. The evening, which was the second Ladies social event at Erskine this year, also raised £165.00 for the Schehalion ward at Yorkhill hospital which is the Lady Captains charity for 2007. The next social night will be a "Fragrance Event" including a dynamic multimedia presentation on Friday March 23rd. Please contact Jo on 01505 351575 for tickets, All welcome.
Posted by Carol